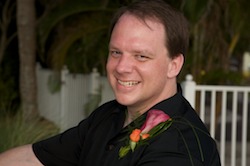 Jeffrey Michael Putz was born in the early 70's in Cleveland, Ohio. Years later, he married Diana Mattoni, where they Brady Bunch'd four cats and grilled chicken in the suburbs of Northeast Ohio.

In between those times, Jeff experienced desegregation in the Cleveland schools, messed around with an Apple II+ and an Atari 600XL, built a drop tower out of an Erector set and cardboard for his stuffed animals, had Transformers wars in his bedroom and dreamed of being a top-40 DJ on the radio.

After graduating from Brunswick High School in 1991, he attended Ashland University to study radio and television. There he finally learned to play volleyball, kiss girls, got "free" room and board as a resident assistant, wrote a column for the college newspaper and pissed off his instructors for working commercial radio jobs while blowing off the school cable and radio stations. Jeff managed to double major in R/TV and journalism, graduating on time in 1995.

Jeff's professional career began in radio, working at stations in Mansfield, Ohio and Cleveland, before abandoning the ridiculous business so he could actually make a living (much to the dismay of his childhood dreams). That led to three good years building up Medina, Ohio's government and school cable TV access programs, working toward public access while producing magazine-style shows, documentaries, sports and public meetings. Oh, and playing with all of the toys as video went digital.

He married his first wife, Stephanie, in 2000 after dating since college, and despite some great times, split in 2006. This time period also served as a constant transition to Internet work. Jeff began to call programming his profession in 1999, gaining experience at most of his jobs while suffering lay-offs and contract gigs. He specializes on Microsoft's platform, including a passion for Azure.

The Web sites organized under Jeff's company, POP World Media, LLC, got a boost when he sold the popworld.com domain name to some crazy Brits for $100,000. CoasterBuzz, PointBuzz and others have been a part of his life since then, and continue to thrive today. He's doomed to write and re-write forum applications and photo galleries.

Jeff also has more than ten years of volleyball coaching experience, ranging from 17-national teams (organized under USA Volleyball and the Ohio Valley Region) to varsity head coach at a high school. Mentoring the kids and watching their skills develop remains one of his proudest accomplishments.

A new chapter in Jeff's life began in the spring of 2007, when he met Diana via eHarmony, and they were married April 4, 2009, barefoot on the beach near Ft. Myers. Then they partied on a boat with their friends and family.

In November, 2009, Jeff (after 36 years in Northeast Ohio) and Diana moved to Seattle. There, Jeff began work at Microsoft. On March 5, 2010, Diana gave birth to their son, Simon Jeffrey. In October, 2011, the family moved back to the Cleveland area, after years of inaction on Jeff's house (a regrettable decision for sure, but paying for two places to live got old).

The latest adventure was a move to Orlando in July, 2013, to enjoy pools and palm trees, and work at a major theme park company while becoming active in the local developer community.

Jeff likes long walks on the beach, roller coasters, volleyball and the occasional Canadian beer or glass of Riesling. Oh, and writing about himself in the third person. "Like the royal 'we,' man!"