This morning seemed like a cruel joke in the making, because it was nearly perfect. With the annoying stuff of the last week, I was just not expecting a turn around.

But there it was. Simon actually slept in, or at least, didn't get rowdy until after 8. The sun was brilliant, and it was going to be 77 degrees. We really had no fixed agenda, since everything (more or less) is packed. Simon not only slept in, but he was in an excellent mood, full of smiles. Clearly we had to make the most of this day, and we decided to try and get up to Sunrise on the northeast side of Mt. Rainier, as we intended to do earlier in the week.

We stopped at Red Robin near Maple Valley on the way, a restaurant that frankly continues to be among the most convenient for handling Simon (read: no silverware required for mom and dad), and Simon was mostly good. We could see the mountain on most of the drive up, too, which is better than our previous visit. With the mounting stress, this was exactly what I needed.

Then we turned on to the road up to Sunrise, where two signs greeted us. The first was that the parking lot at the top was full, the second that we should expect long delays. Neither one of these were useful in making any decisions. A cyclist was off to the side of the road where traffic was stopped, so we turned off to change Simon, and Diana asked if he knew anything. Turns out they were basically letting in one car for every car that came out. The park service was also not charging the usual $15 per car. Given the weather, you can understand the situation. He suggested going up to Crystal Mountain, a ski facility with a gondola, a few miles away. It wouldn't get us close to Rainier, but at least it wouldn't be a wasted trip. Good thing, too, because looking at the map, we were probably a mile from the guard station in the national park, and that traffic wasn't moving.

I was discouraged, but figured, whatever, let's roll with it. Diana said I should, because she lived on the edge and didn't bring in a sippy cup to Red Robin. That's probably only funny to us. In any case, a few miles later, we were driving up to the base area of the ski resort, with lifts criss-crossing the hills, and one very new gondola lift going to a place we couldn't see. At this point, I didn't care what it cost, I just wanted to see the mountains.

The ride was $20 each, which seemed a little much, but whatever. The peak is 6,800 feet, about where Sunrise is, only this one is 12 miles from the peak of Rainier. Better 12 miles than, uh, Tacoma. Fortunately, when we got up there, I was not disappointed.

The view was spectacular. Sure, there was Rainier in all of its glory, but what struck me was the valley below. The back side of Crystal Mountain is very steep, and you could see one of the rivers weave in and out of the hills. Rainier had "caught" a cloud that was stock on its peak, and it was a little hazy, so the view wasn't quite perfect. You could see Mt. Adams to the south, but Baker and St. Helens were obscured. (You can see Baker from our neighborhood when it's clear anyway.) It was really quite striking.

The gondola ride itself was pretty cool. Such a neat ride, and nothing like your typical amusement park lift. Interesting that it's made by a Swiss company. I suppose that makes sense, given the mountains there.

Overall, it was a good save, and I'm glad Diana talked to the cyclist. It would have been a shame to spend one of our last days in Washington doing nothing, especially with the weather turning to typical Seattle fall crap tomorrow. 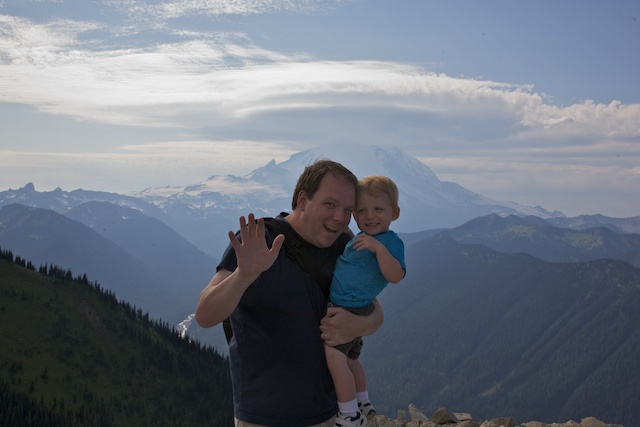