I had another follow-up visit with my doctor yesterday. It's the second one since my annual physical in July. In August of last year we started addressing my hypothyroidism, which was a pretty easy fix. In September she put me on a statin to get my cholesterol down. By January, I finally got my HDL up and my LDL down to normal, but my triglycerides were still too high. She put me on icosapent ethyl, which is the omega-3 fatty acid that's good for you and doesn't raise your LDL, as "fish oil" typically might.

In July, my triglycerides were still high at 250, and they need to be below 150. What I've changed the most since my September follow-up is that I'm moving around about twice as much, dropping a few pounds in the process. I'm also trying to be a little more sensitive to my sodium intake, which is high in the many convenience foods that I tend to eat. My cholesterol numbers are now the best I've had in my adult life, with HDL at 49 (normal is >39) and LDL at 69 (normal is <100). I can't even tell you how thrilling that is. My triglycerides are still at 200, but I've learned more about how volatile that test can be based on hydration, and I was definitely dehydrated that day. In fact, the blood work showed that my kidney function was just a little out of range, probably for that reason, so she wants to do another test in a few weeks to make sure it was a one-off. And I should drink a lot of water.

I'm still half-concerned about my blood pressure readings in the doctor's office, which are always crazy high. I compare my home unit readings to those I get from the machine at Publix, and they're pretty close. Generally averaging a little high, like 120's/80's (normal is <120/<80), but not like 140/108 like I had in the office. Today I took three readings at home averaging 117/78, which seems crazy good.

So how did I get here? Well, the problem has never really been about my physical health. The math here and remedy has always been pretty obvious, even if I did need some statin help. The hypothyroidism may have factored into all kinds of things, including the big progress point, which is in mental health. Starting bupropion this year dramatically changed the way I feel after two or three months. I remember a year ago how hard it was to get off the couch. But I eventually started feeling again, and this year has been about refreshing everything about the way I see myself and the world that I operate in. Eventually I got to a place where I felt mentally good enough to address my physical health. I've tried to avoid stress, watch less news, I don't doomscroll anymore. It's still not easy to get moving all of the time, but I give myself a little room to do whatever I'm up to.

It'll be interesting to see how long I can persist the slow weight loss, because I've often plateaued hard, but I would be content to drop just six or seven pounds between now and my next physical in July. For now, I'm gonna celebrate my cholesterol win.

Also, my doctor is the best I've ever had. She doesn't bullshit me, but still responds sensitively. She's always on time or early. Every. Time. She always listens. I do find her slightly intimidating, because even though she's not very tall, she's a cancer survivor, mother, business owner and an f'ing doctor. That's pretty great. 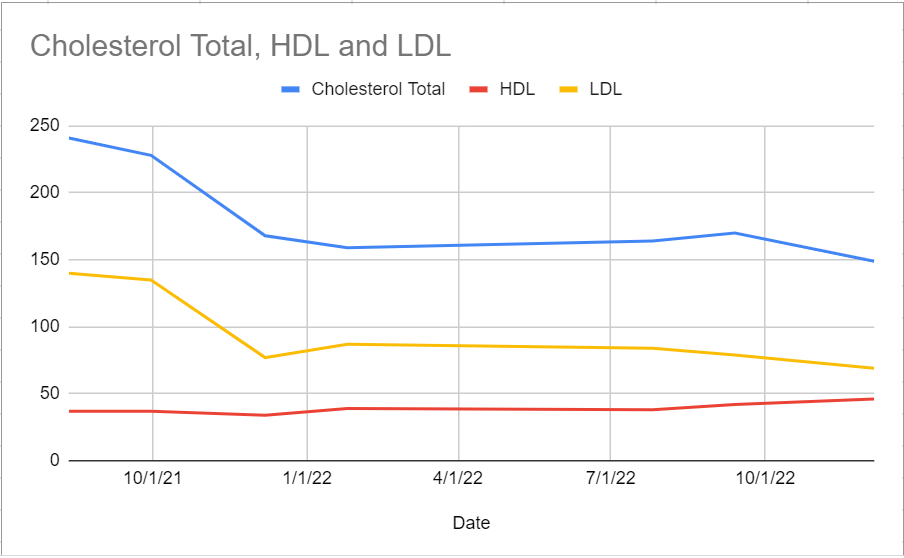