My wife, Diana, is awesome for a great many reasons. When we moved to Seattle, following both of us getting laid-off in 2009 while getting pregnant, Diana decided that she would stick to being a mom for at least the short-term, since I was making more than enough money at Microsoft. Understand, that's a pretty bold move to make for someone who spent the previous 20+ years being largely self-sufficient. It turns out that this was a good decision for a great many reasons, not the least of which is that it allowed her to be super involved with Simon while some of his earlier challenges surfaced. That, in a lot of ways, is full-time work by itself. It wasn't until about two years ago (and change) that she started to work part-time again.

A little over four years ago, Diana decided that she wanted to become more serious about quilting. Sure, it's a hobby, but what I've learned is that even hobbies require excellent tools to do it right. That's why years ago I bought a decent camera and a decent video camera. Ditto for expensive computers used to write code. If you're a mechanic, you don't buy your tools at Walmart. (Sidebar: You might buy them at K-mart though, since they carry Craftsman, the Sears brand, which have been pretty solid for as long as I can remember. My socket set I've had for two and a half decades!) So she bought a really good sewing machine. Since then, with a lot of practice and an excellent tool, she's become pretty good at quilting. She made an amazing BB-8 quilt for Simon for his birthday.

Meanwhile, her blog is pretty well followed, literally by thousands, and when she goes to a conference, people know her. That's pretty cool. For some time, we've been talking about a long-arm machine, which allows you to free-motion the shit out of a quilt, without being constrained to the relative confinement of a traditional sewing machine. These things aren't cheap. However, Diana met a vendor at a conference, who was willing to sell the floor model for about $2k under the normal price. As it turns out, they oversold their units, so she got a completely new one for that price. Score!

Certainly something this expensive isn't viewed strictly as a hobby purchase, and she was motivated in part by the fact that she met someone who paid for one of their kids college tuition by renting out their skills on a long-arm to people who need big quilts quilted. The idea of getting paid for something you enjoy is not a hard sell, and I agreed that it would be worth it to purchase the machine. We don't have a business plan around this or anything, but if she can bang out a few paid gigs a year and it pays for itself over some arbitrary number of years, that's a pretty cool way to pay for a hobby! In all of the years I've been shooting video for fun, I've only made about $3k. That wouldn't even pay for one of the two cameras I've owned at various times.

Diana is part artist, which you would expect for someone who pursued a career as a stage manager. I love that she gets to do this now, regardless of whether or not the cost of the machine is ever entirely paid for. It's amazing how quilts touch people. I'm glad that I get to be the supportive husband in this case. I like to brag, a little, about her. 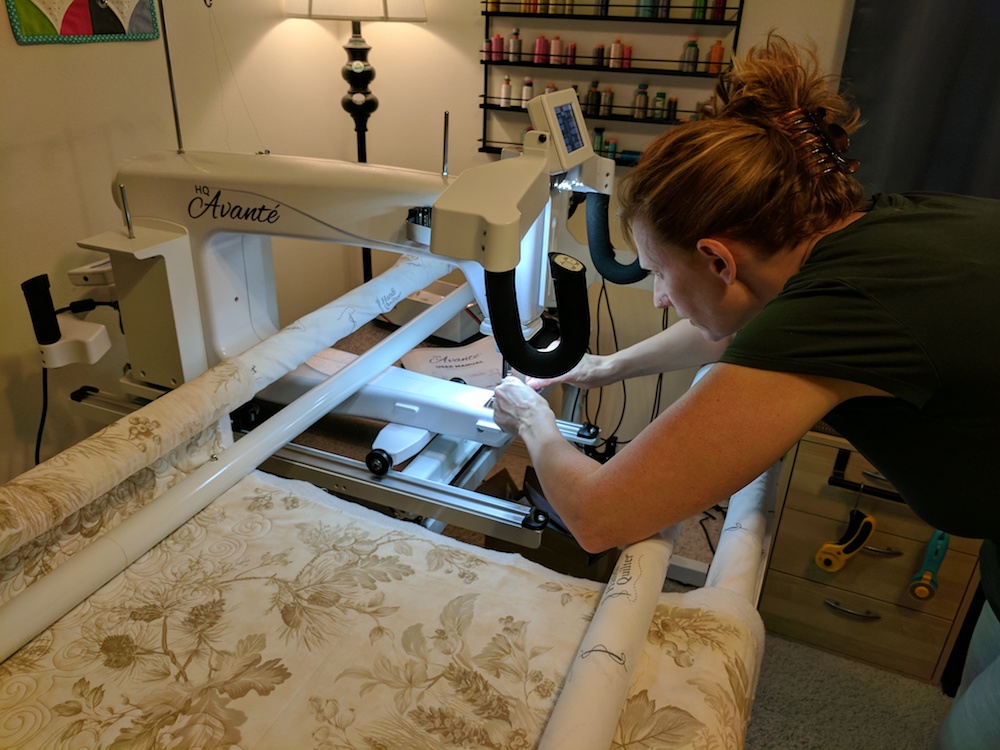