The weather cooperated enough on Sunday that a little visit to the zoo was in order, offering a chance to finally get out of the house and shoot some stuff with the new camera. As it turns out, this arrangement isn't great for us, because while I carry the gear and shoot, Diana pretty much is a single parent with Simon. I should probably save this kind of thing for solo trips.

In any case, I also bought a new tripod, because my little 12-year-old Manfrotto was really too small to use when you added a lot of gear around the camera. The head in particular was too small for the weight. I decided to stick with the Italians (get it, "stick," as in tripod?), and got a 546B with the 504HD head. I love it. It has the smooth drag of the pro tripods I had back in my broadcast days, only with better controls. It's a little heavy, but not horribly so, as I couldn't justify the carbon fiber anyway.

I also had a bunch of Redrock Micro support gear that I was able to reuse for this camera, including the follow focus and carbon fiber rods. I can't say enough about their stuff. It's really fantastic. The new piece I had to buy (other than the LiveLens) was a lens support, as a precaution, to relieve some of the lens weight from the camera.

Moving around was pretty easy with the entire rig. I brought just my Canon 70-200mm f/4L lens. That made it pretty long, but still easy to cart around by the handle. I mostly moved from one location to the next with the tripod legs' bottom third extended, putting the camera at nipple height. I've wanted a ball socket tripod for years, and dropping it and leveling is stupid easy.

In terms of operation, the camera is ergonomically pretty well designed, and very familiar if you've used Panasonic cameras before. This if the fifth Panasonic pro camera I've used consistently, and it feels super familiar. With that big lens, I wasn't even going to try to do handheld, but around the house with a short lens, it seems pretty manageable. The follow focus was fantastic to use, and I never found myself having to "reset" the gear position at the end of the focusing range (meaning if you hit the end of the range you would eventually end up with the clamp knocking the focus gear). What I really like is how easy it is to go into variable frame rate mode. You just push the dial and you're there. It doesn't record sound in this mode, but it's good enough to tell you that with a big graphic in the viewfinder that says "A.REC" with a red slash through it. Everything I shot was at 60 fps.

The red peaking focus assist works extraordinarily well if you have things with sharp edges in the frame. For example, a lot of the critters had grass around them, and as you turned the focus, you could see the red move near and far from you. Whiskers and eye glints also work well, as does some of the more textured fur. Focus can be pretty dodgy in HD, but with a little practice, I found myself getting it pretty quickly.

Exposure generally went pretty well, except for the gorilla, who was behind glass. I was able to fix it enough in post to be satisfied with that shot. I looked at the waveform once or twice, but the zebras (exposure in the viewfinder, not the animals) generally kept me on target, avoiding blown highlights. Using the LiveLens to adjust aperture isn't as nice as the dial on the camera for "native" lenses, but even in this on-the-go scenario, it wasn't a big deal. The neutral density filters are beyond awesome, though I didn't pay much attention to which one I was using. The lens if f/4, so I have to see what happens when I'm outdoors with something faster, like the 50mm f/1.4 I have. In bright sun, I probably can't go much beyond f/4 without some external ND filters. The camera's slowest speed is ISO 200, unfortunately.

Overall, the effort to get what I did was not large. I wasn't particularly careful, I obviously don't have control over lighting, and the results were still pretty solid. Thoughtful indoor use or on a set should yield outright amazing results.

The image quality is exceptionally good, and the noise in the shadows is surprisingly not upsetting. AVCHD compresses the crap out of the images, and yet, I don't see significant artifacts or compression noise. They're there, but it's relatively minor. Yes, I suppose if you were really concerned about it, you'd want to record externally, but considering most of what I shoot will be delivered via the Web, I'm winning.

Post workflow is something I'll have to think a little more about. I can use Premiere Pro and edit natively, but scrubbing across video, especially with an external drive, isn't particularly quick. The CPU on my 27" iMac gets a little choked up. I suppose transcoding to ProRes or something would make sense.

So far, I couldn't be more pleased with the camera. I absolutely love using my Canon lenses, even if the camera sensor is smaller than the full-frame SLR's. The Four Thirds sensor is actually not that huge of a departure from the APS-C size of my 7D. I generally feel that I have lenses for most use cases, the one hole being a faster wide angle for low light situations and, of course, shallow depth of field. My 24-105mm f/4L could benefit from a few extra stops. I suppose if I get a lens to cover the wider range, it will likely be a Canon so I can use it for all of time. Not sure I want to commit to buying Four Thirds lenses.

Here's the result of some of what I shot. I cut in Premiere Pro CS5.5 and color graded (a little) with Colorista II. I <3 Colorista. (Watch it full screen for HD goodness.) 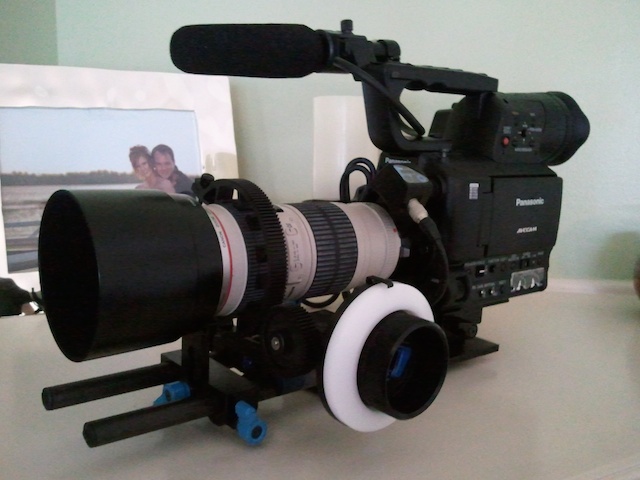 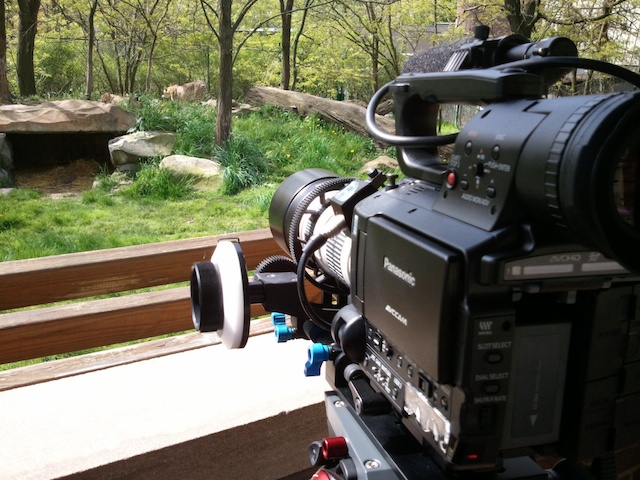