I waited about 20 months, which is pretty good self-control, before I finally bought the Ultimate Collector Series Millennium Falcon. But it was my birthday, and I decided that I deserved it. It is, in fact, glorious.

Judge me if you want, but spending $800 on the biggest Lego set ever created is pretty much what any adult Lego fan with disposable income would do. There are over 7,500 pieces in this thing. The next largest set in my collection is the roller coaster at 4,124 pieces, then the Disney Castle at 4,080. I'm not sure what the total build time was, but if I had to guess, it was probably around 30 hours.

I find myself stressed more than I'd like lately. I imagine it's a combination of work, parenting and just every day life. But the one thing that sets me at ease consistently is sitting down to build one of these big sets. I put on some tunes, grab a beverage, and start at step 1. I'm using my hands and my mind and turning a mess on the table into something cool. It's very satisfying.

Simon has a few of the small Star Wars sets, but I haven't bought any of them myself. The Death Star always seemed kind of neat, but I never pulled the trigger. The Millennium Falcon is arguably the most unique and junky space ship in science fiction, and it's an enduring work of art. I'm gonna cry a little when I finally see the one next door at Disney's Hollywood Studios. What makes it so interesting, and such a great candidate for a Lego model, is all of the detail and texture. Most of the surfaces on this thing are rich in that detail, and it looks amazing.

The build starts with a frame, and from there you snap the interior rooms into it, and then attach panels around everything. You don't want to "fly" it around making "pew! pew!" noises, because it's not durable like that. One of the last pages in the instructions actually shows how to carry it around so as not to break it.

The finished product has the original radar dish, which you can swap out for the replacement that appears in the newer movies, since the original was clipped off in the final Death Star battle. It comes with old Han Solo and the younger version minifigs, so you can pair them with Rey and Leia as appropriate. You'll also find BB-8, C-3PO and of course Chewbacca. There's a pair of little porgs too. The instruction book has a rich history of Millennium Falcon Lego sets, and stuff about the design of the ship in the movies. Also you should know the book is spiral bound and weighs 7 pounds.

I didn't find anything super challenging about the build, because they're really good at writing instructions, but some of that texture on certain panels can be a little tedious at times. You definitely have to count out all of the parts before each step to make sure you get them all on the model. There's a lot of rotating and flipping given the scope of this beast.

I really enjoyed this build, more than any other set (the Disney Castle is a close second, if you're wondering). The disassembly should be interesting. As I mentioned last year, I do disassemble to the numbered bags used in the original packaging. The fun is the building, not just the finished product. I wouldn't drop $800 to build it once. This one will probably be pretty easy, if a little time consuming, because most of the 17 bags are just panels over the frame.

Overall, I strongly endorse this set. When it was announced, it seemed a little ridiculous, but I think it's entirely worth it now that I've got it. I look forward to rebuilding it for years to come. 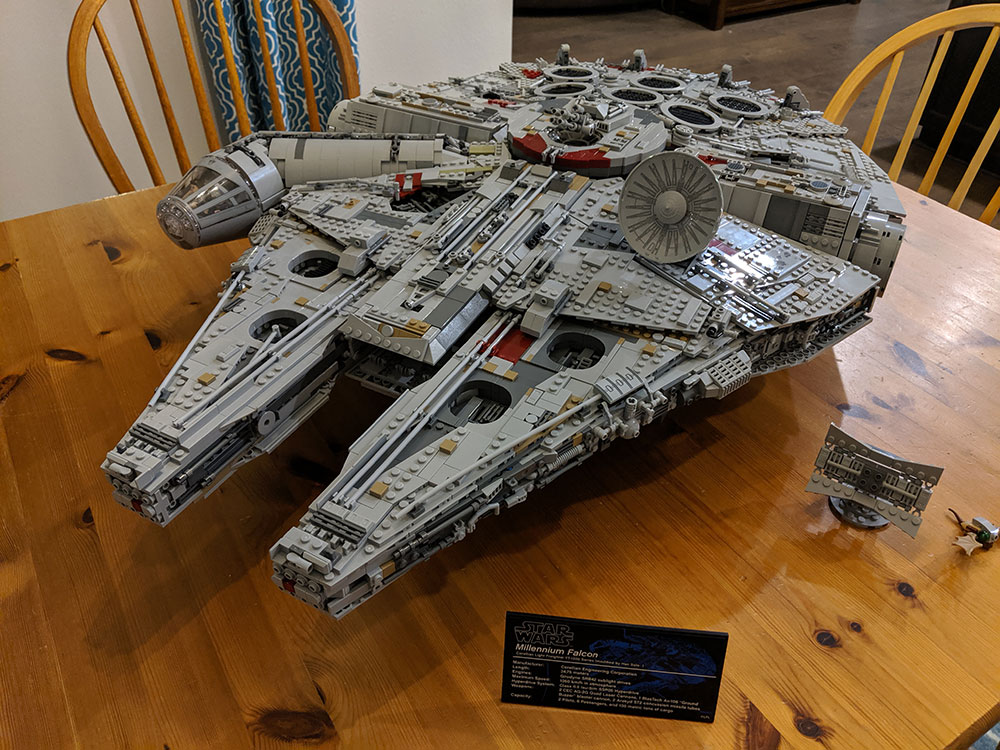