Caity's last match as an academic

We headed out to John Carroll University tonight to see Caity play in what ended up being her last match as an academic. Her team, Marietta, needed to win tonight to make the conference tournament. Despite a strong start, the passing fell apart and they just couldn't click after that first win, dropping the next three.

But what an incredible eight years! Her talent was obvious at a very young age. It was first identified by her high school coach as a freshman, who coincidentally graduated the same year as me from Ashland. While that coach unfortunately moved away, I was lucky to get Caity for two years on my 17's teams, bringing her up a year, then vigorously fighting to keep her at 17's the next. I've never coached a kid that had more talent, more respect for the game and above all, the ability to learn and consistently work to be better.

It was with Caity that I first tried to use the swing offense, and it was her ownership in it that made me a believer. She was definitely one of those kids who could've called me out and told me what I was doing was crap, but she didn't, and in fact helped me feel out how to make it work. She was always able to tell me what was going on in practice and game time. Her ability to communicate was awesome.

When she went away to college, I knew that bigger schools would likely overlook her because she's 5'6" (nevermind that she generally jumps higher than the middle blockers next to her), but I also knew she could be at the core of any D3 or D4 school. And that she was at Marietta, starting the majority of the time all four years again. High coaching turnover caused some ups and downs, but she was out there most of the time, working her ass off regardless.

Needless to say, there were tears with the loss tonight, because that was a less than ideal way to go out. But after that sting goes away, I hope she realizes just how amazing it has been for me and her fans, namely her parents, to watch her play these last eight years. I mean, shit, a part of me feels like coaching will never be as good because I'll never have a kid like her again! It wasn't just the ability, it was the nearly perfect attitude.

So that's my tribute to my favorite kid ever. I hope that as she goes out into the world, by some remote chance we'd get to play or coach together. It would certainly be an honor! 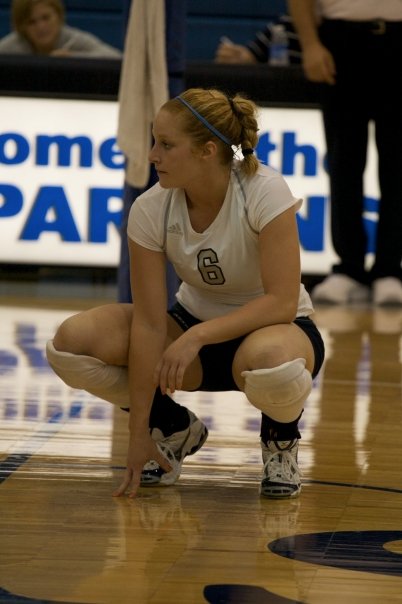