When we did a New Year's cruise at the end of 2018, I thought that might be the one and only time that we sail on the Disney Fantasy unless they change the itineraries around. It has mostly been doing Eastern and Western week-long Caribbean runs since it went into service in 2012, and we've not typically been super interested in those. But after the pandemic "break" and having only one other cruise this year, I was looking for some meaningful detachment and relaxation, so we decided a good family Christmas gift was to do another week-long itinerary. With Simon's relative indifference to gifts and our general preference for experiences over stuff, and a relatively OK price give the proximity to Christmas (like $4k less than that NYE cruise we did), we went for it. This time it was the Western Caribbean, which stops at Cozumel, Grand Cayman and Falmouth, Jamaica, with the obligatory day at Castaway Cay.

We feel like the Fantasy has a slight edge over its sister, the Dream, because of differences in the atrium decor mostly, and a few other positive changes. It was cool to see it again, and it's familiar like the Dream, which we have sailed on so many times.

This was Simon's most independent cruise yet. When he was 9, we gave him a cheap Android phone (no cellular), so he could use the onboard chat app, and we trusted him to check himself into the kids clubs. On the first two post-pandemic cruises, 11-years-old by then, he was all-pro at navigating the ship and doing his own thing. On the inaugural Wish sailing in July, which had very few kids overall, he spent much of his time in Edge, the tween club, and on the Aqua Mouse, the themed water coaster. This cruise went similarly, where he would spend time in Edge or the pools or getting ice cream or whatever. He mostly checked in with us from time to time. There were a few times he wanted us to be with him, like the Edge send-off party (there were only three other sets of parents there), and we did get to see him interact with others. Hard to tell if kids are just being kids or being real dicks to him, but either way I'm happy to see him engaging and figuring it out. The youth counselors were amazing with him, as usual. We had some challenges getting him to make sure he had lunch, but otherwise, we didn't see him that much, leaving us to do grown-up things. Another perk of cruising... it's not like he can leave the ship.

We didn't do much in the various ports. The sanctioned port activities were all pretty expensive for what they were, and the general travel advice is to not do stuff on your own in certain ports. In Cozumel, we were greeted by a Hooters and a Starbucks, and police in full tactical gear carrying automatic rifles. Yikes. Grand Cayman required tendering, and Diana and Simon did it just to ride the boat. I find all of the tropical ports to largely be the same, full of diamond sellers and duty free shops. The only historical opportunity on any of the stops was to see the Mayan ruins, which unfortunately involves a boat ride to the Mexico mainland followed by an hour plus on a bus, leaving little time to actually see the ruins. Not cheap either, and with mixed reviews regarding the transportation.

Simon stayed aboard in Jamaica, while Diana and I explored the shopping district there in Falmouth. It was one of the nicer setups, but our servers (native to Jamaica) suggested not straying too far out of the area, and more hilariously, suggested Margaritaville. We couldn't in good conscience go there, even if they did have proper Jamaican rum and food. It was literally in the shadow of the other ship in port (RCL's Harmony of The Seas), and we have Margaritaville in Orlando. But there was one shop where they were actively selling you, a turn-off had it not been for them allowing us to sample all the rums. So we overpaid for three bottles of rum and a pound and a half of jerk spice, but I guess I don't mind because I'm pretty sure I had about three drinks worth of rum just by tasting, including a sip of a 50-year. To be honest, I was not impressed with the straight non-aged or not-very-aged rums. They were not even remotely smooth. Your basic Bacardi white rum is easier to drink straight. But we really liked two of their cream varieties, one of which has coffee. Think Bailey's, but richer. We also got a bottle of vanilla which was really strong, in a good way.

Our Castaway Cay day was a total bust. The forecast was never good, but the 77 degrees it actually was ended up being the best we had. It started in the low 60's! The bigger problem was the thunderstorms. A few bands of nasty weather were rolling in ahead of the front that made the rest of the US cold. We watched the radar, and Diana and I decided to do a loop before lunch. It was weird. The umbrellas were all down, there were a few kids in the water, but winds were over 15 mph so it felt cold by Floridian standards. We walked down the family beach to the half-way point, then walked back via the sidewalk and returned to the ship, seeing the first cell getting closer. By the time we got upstairs for some lunch, the sky had opened up. It looked like people had mostly crowded into the lunch shelters on the island. The deafening thunder started and for the first time we've ever seen, they closed the open parts of the pool decks. This was, I believe our 25th trip to that island, since we've had some "double tap" itineraries. You go that often, you're bound to have a bad day. I was surprised we could even dock given how windy it was.

The rest of the cruise was pretty much the same as any other Disney cruise, which was kind of the point. There was a lot of relaxing, reading, napping and this time more than any other, bar socializing. As is the case with the Dream, the martini bar, Skyline, never gets really busy aside from the pre-dinner second seating rush. We met a great many interesting people there. We also did two alcohol seminars, our usual mixology as well as one for mojitos and caipirinhas. The bar team in Skyline, Amit, Wilson and Chika, were absolutely amazing. Being from India, Dominican Republic and Japan, respectively, meant we had a lot of great discussions about food, drink and culture. It's the one thing we all have in common, even though we may consume different things. Wilson asked what our "traditional" foods were, and he was surprised that we didn't really have an answer. It depends on where your family may have originated and where you live now. It's so strange that xenophobia runs so rampant in America when so many of us are barely a generation or two from immigrants in the first place. I don't know if we'll ever encounter those folks again, but I hope we do.

Overall, the week was the thing our dining room servers kept calling out... no pressure, no pain. It was an enormous reprieve from having to thing about, honestly all of life. I got up in the morning, did some walking (10k+ steps every day!), had breakfast, had a pedicure, enjoyed the beverages eventually landed at dinner, and spent a fair amount of time sitting around in between just hearing the sound of the water around me. That sound dulls all of the worry and sharpens the moment for me. I can't wait to do it again. 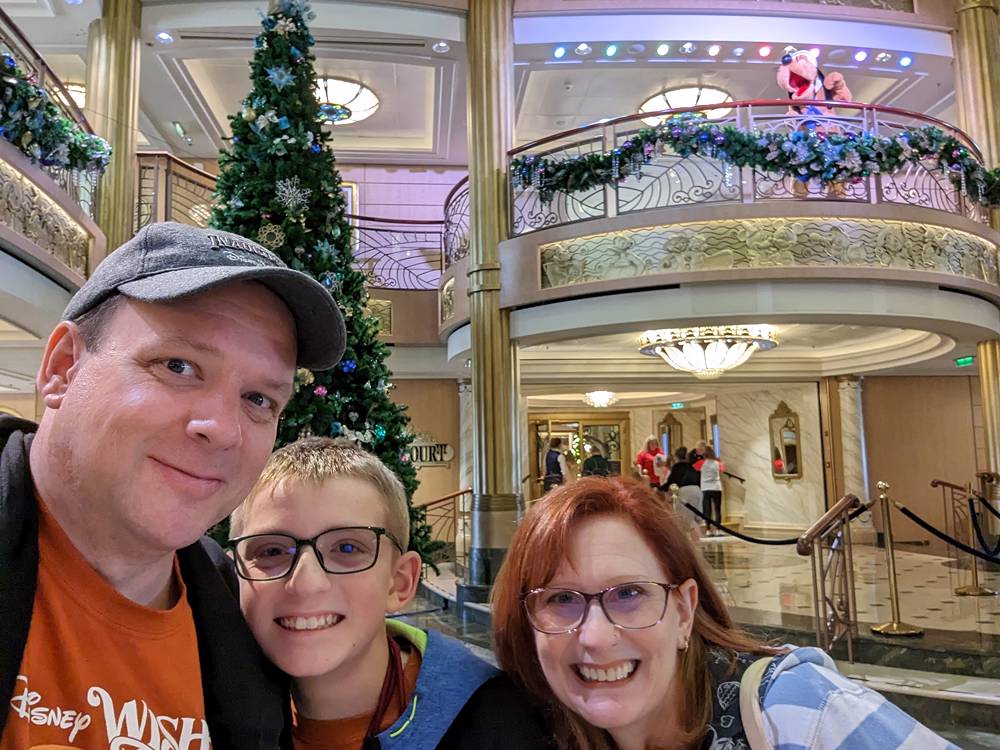