As of today, we've been driving electric cars for two years straight. There are no tailpipes in our garage. I think I may take this arrangement for granted now, because if I put myself in the mindset of me even three years ago, I would not have guessed that this was possible, let alone our normal. That's why I probably need to cut people a break when they're still skeptical that driving EV's can be your everyday life.

We have a Tesla Model S and a Nissan Leaf, and while one costs more than twice what the other did at the time, the experience is remarkably similar. Have you ever driven an indoor electric go-kart? It's hard to get used to the insane amount of torque those things have, but that's what an EV is like. If you're sitting at a traffic light and you blast it when the light turns green, you'll be well into the next block before the car next to you has finished crossing the intersection. If you're in the Leaf, yeah, the other car may catch you, but this always available torque, and the precision that comes with it, is the joy of driving an EV.

The questions that people ask aren't really the right questions. It's different enough from driving gasoline cars that I think people overlook that you just operate differently.

"How long does it take to charge?"
Let me ask you this: Do you know how long it takes your phone to charge? Probably not, because you plug it in before you go to bed and it's charged when you wake up. This is exactly what you do with your electric car. Imagine if you started every day with a "full tank," because it's like that. You don't typically fill your tank every day, but with an EV, you've got the range you need every morning.

To answer the question, we charge the Leaf on a standard 110v outlet, which adds about 5 miles per hour. It's pretty slow, but our typical day of use involves at most 80 miles, so if you're in by 5, you're good by 8 the next morning. The Model S charges on a 240v/40a line at about 30-ish miles per hour. At a Tesla Supercharger, you can put on at least half of the electrons in 20 to 30 minutes, depending on the state of charge (like a laptop or phone, it's slower when near empty or full). And the charging rate isn't really the right question either... if you're doing road trips, the correct question is, "How long do I have to charge before I can go to the next stop?" In practice, we've been in the 20 to 30 minute range, though stopping for food almost always goes longer anyway. When the app says we've got enough to get to the next charger, we go.

"Where do you charge?"
Home. People get really hung up on the presence of public charging (or lack thereof). I don't remember what the research says, but it was something around Americans averaging 30 miles of driving per day, and the distribution of those that exceeded 200 miles in a day, as a percentage of all people on all days, was less than 1%. In other words, if you've got an EV that can do 200 miles, and you have a garage, you likely won't need public charging ever. OK, it's unlikely at least. I can count the number of times on one hand over three years that we've needed public charging with the Leaf, which only has a range of 80-ish miles. The Model S can use the Tesla Supercharger network.

Even if range and charging was a serious challenge, the fact is that I'd roll with it and rent a gasoline car for the rare instances I need one. I admit, the older EV's are limited, but the only problem with the Tesla is cost, something mitigated with the Model 3. Long-range EV's have gone from $80k to $35k in two years.

Tesla definitely has an advantage here, as they've created this great network of chargers, and they're expanding it in a big way this year. We've used 14 different locations (see map below), and it has not changed our road trip behavior in any way other than having to plan a little about where we would stop. I've never been a car guy, but it has been a lot of fun to meet people at Superchargers and talk about their road tripping experiences.

"What about if you're stuck in traffic?"
You'll last a lot longer than you will in a gasoline car, because you're not having an engine idling the whole time. You'll use juice for the AC, but that's relatively efficient.

"When do you have to replace the battery?"
Probably never. Now that EV's have been around for awhile, and put through some extraordinary miles, it looks like they last a really long time. Of course they will degrade some, but it looks like it's fairly inconsequential unless you have a "bad" one. Tesla warrants their batteries for 8 years and unlimited miles, and I've never owned a car for eight years. I'm not particularly worried about it.

"Good luck finding a mechanic."
I don't understand this sentiment either. Dealers train their people because the manufacturers require it. In the case of Tesla, they don't operate maintenance as a profit center. Still, EV's have exponentially fewer parts to break. They don't have transmissions or pistons. They don't need oil changes. Heck, the brakes last "forever" because much of the stopping power is handled by the motor, recovering energy when you pull your foot off of the gas. Even if getting maintenance was an issue, EV's don't need much to begin with. With 50k miles between our cars, we've changed the wiper blades. The brakes are barely used.

"Green? Doesn't your electricity come from oil or coal?"
There's an enduring myth that driving an EV is environmentally pointless if the power is generated by fossil fuel burning plants. This just ain't true. The EPA says the average carbon footprint of driving a combustion engine car one mile is 411g of CO2. Generating a single kWh of electricity from a coal plant generates about 900g of CO2. So using our numbers below, the Leaf at 4 miles per kWh costs 225g, and the Model S at 3.5 miles per kWh costs 257g. Already, we're at a 38% reduction assuming it's 100% coal generated electrons. Natural gas generates on average 465g of CO2 per kWh, so now we're at 116g for the Leaf and 132g for the Model S, a reduction of 72% and 68%, respectively, compared to burning gas. That's a massive difference.

And by the way, this is assuming that the power is all coming from fossil fuels. When some or most of it comes from nuclear, the carbon footprint goes even lower, and when it's from renewables, it's about as clean as it gets. We're hoping to install solar at house in the next year, and at that point our cars are powered by the sun. Not only does economy of scale allow for less carbon emission via traditional generation methods, it sets us up for zero.

"Yeah, the carbon footprint of the manufacturing process..."
This myth has been debunked countless times. Yes, the raw materials inside of an EV have a carbon cost, just as those do in a conventional car. Even if they were just as high (they're not, depending on who makes the battery), you've still got a lifetime of non-emission that would more than make up for it many times over.

"I bet your electric bill sucks."
Not at all. My "gas" is regulated because electric utilities are regulated, so we spend around 13 cents per kWh, and that's more or less a fixed cost. The Leaf can do 4 miles per kWh, the Model S more like 3.5, but it depends on how much is on the highway. That means, worst case, the Model S costs 3.7 cents per mile to drive. If you drive a Toyota Corolla pushing 35 mpg and gas is $2/gallon, you're spending 5.7 cents per mile. A big SUV getting, at best, 15 mpg, will cost you 13 cents per mile. When gas goes back up to $4/gallon, and it will, double those numbers.

"EV's are too expensive."
This has been valid criticism for a long time, but consider this: Most hybrid cars with batteries cost very little more than their non-hybrid counterparts. Pure plug-in long-range EV's were $80k two years ago, now they start around $35k. This won't be a valid argument against electric vehicles for very long.

Electric vehicles are the future. There's no getting around it. It's not even an environmental issue, it just makes more sense, and it's a far more convenient way to drive. We won't go back. 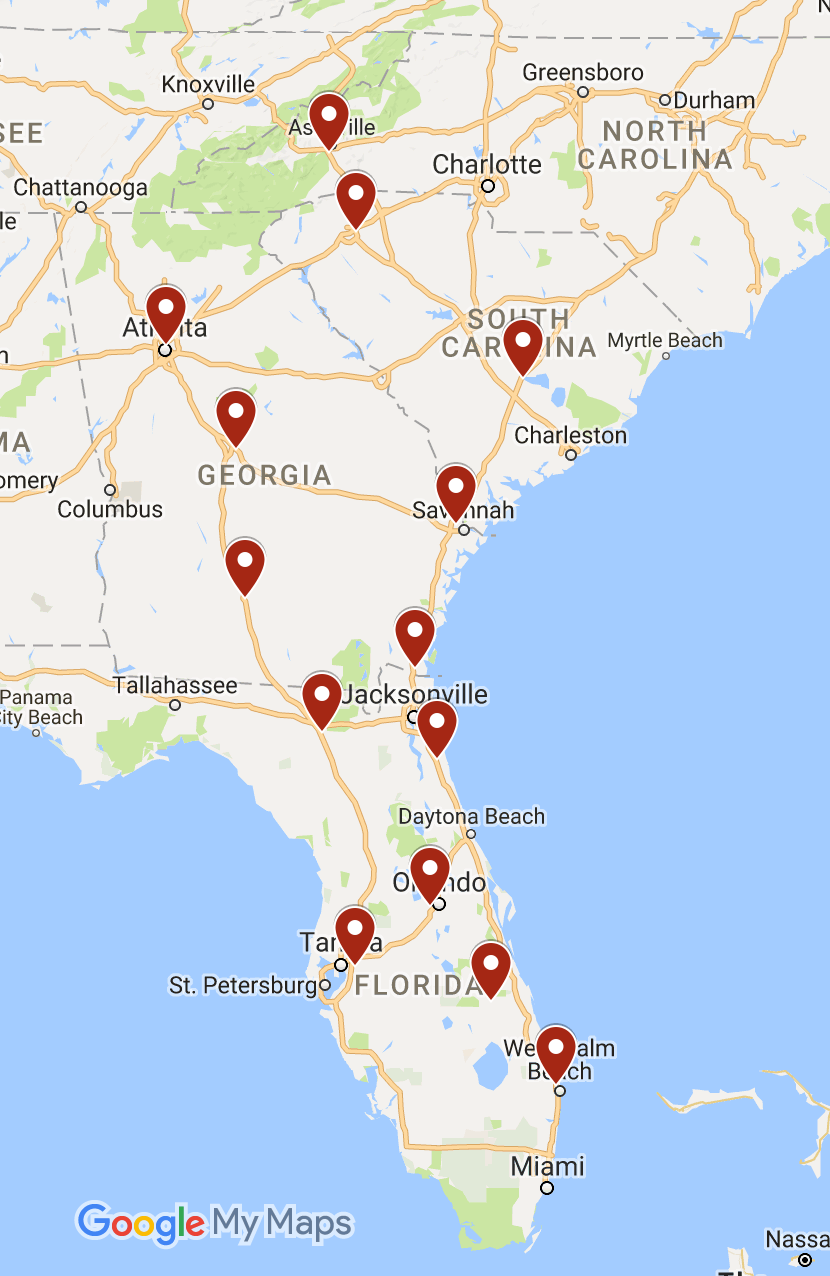 All of the places we've used a Tesla Supercharger. Range is not an issue.

Speaking of never using the brakes, I have a Chevy Volt and my rear brakes look like they've never been used. People have gone in for their 150k mile service with the original brake pads and they still didn't need to be replaced. One thing I read on the Tesla Motor Club forum and also the Tesla subreddit are people getting stuck with costly brake repairs with their Tesla because of how infrequent the actual brakes are used. The service manager I saw post on there is that their unofficial position on making sure this doesn't happen is to slam on the brakes hard every once in awhile to make sure they get used and to prevent them from seizing. Happy Electric motoring!

It seems like the “What if I run out of power” question deserves a better answer for those of us that don’t fully understand EV (your audience). If I run out of gas I can fill a container at a gas station. What’s the EV equivalent to that? Thanks.

Unless you have a broken gauge, when does anyone run out of gas?

Richard asks a reasonable question. You get hit dead on by an Irma and you're looking at possibly a week without power. Now you basically own an 80 thousand dollar paper weight. Let's say you have to evacuate and you're sitting in traffic for six hours with your family. Can't be a good feeling. I know many people who own Tesla's and all of them have a gas powered vehicle in their garages as well. I know several who have multiple Tesla's and they all still have a gas vehicle. These people are also rich but that's besides the point.

Tesla's aren't for me, personally.

Except that the nearest Supercharger is powered by solar, so, no. Also, most people don't drive more than 250 miles in a week. We've been all-EV for more than two years. We're not imagining the feasibility, we're living it.