Garbage and Tears For Fears and the most epic concert

I completely missed seeing Garbage when they toured a few years ago for Strange Little Birds, which in my opinion is every bit as good as their first two albums. They came to Orlando, but I didn't have anyone to go with and I just missed it. I was determined then to see them with Alanis in 2020, and since they weren't coming here, I would go up to DC and see them with my friend Ken, who lives there. Obviously that didn't happen. Garbage did tour with Alanis last year, but I didn't make that happen.

Then, Tears For Fears came out of nowhere with their first album in 17 years, and it turned out to be impossibly good. Then they announced a tour with Garbage. They were coming to Tampa, but we planned to be on a cruise then (it was later delayed), so I figured I'd go to the Cleveland and meet Ken there to see them in the place I saw my first show 34 years ago, Blossom Music Center.

The scene was pretty weird at first. We got the paid parking because I remember how crappy the grass lots are, and the odds of rain were high. Everywhere around me it seemed like there were... old people. And they were mostly driving expensive cars. Then I realized, holy shit, I'm old people. I'm at that stage of adulthood where I have a fair amount of discretionary income and retirement is closer than college graduation. I was also surprised by the number of people bringing their kids, and the kids didn't seem to hate it.

There was a weather delay letting people in, which I think had the opposite of the intended effect. We were among the first in, and we just barely made it into the pavilion before the sky opened up Florida-style. A lot of folks got very wet. I think a lot of people with lawn tickets also got to swap them for the pavilion, because there were almost no people out there by the time the show started (30 minutes late).

The two bands seem distant, except they're not. Obviously the fandom of the two overlaps, or I wouldn't have made seeing them a priority. Tears For Fears is generally labeled as an "80's band," as their first three albums came in 1983, 1985 and 1989. Songs from the Big Chair often makes various lists as one of the most important records ever, and it stands to this day. I saw them on the Seeds of Love tour with Oleta Adams singing and playing piano, and they were fantastic. Roland went on without Curt and made two albums after that, and they reunited for an album that had a little success in 2004, but went unnoticed by me. Then they come roaring back with The Tipping Point, which is one of the best albums released in my lifetime. I'm not even exaggerating. These guys have seen some shit, and the music is even better for it.

Garbage has made just as many albums, with their debut in 1995. That's only six years after TFF released Seeds of Love, though it feels like more. Garbage went dark between their fourth album, Bleed Like Me, and their next, Not Your Kind of People. They too, have seen some shit. Garbage came along at a time when new music was exciting and varied a ton, in some ways the way one-hit-wonders did in the 80's, only it felt more rock-n-roll. I got to see them at their 12th show ever in late 1995, where a very uncertain Shirley Manson paced around on stage with a band that was conceived as a studio project. Of course, the patronizing music press was skeptical of bands with women, but it wouldn't stop them.

As best I can remember, I've seen Garbage a total of eight times now, twice after the debut, and twice in 2012. They had really found their voice and on-stage style by that second show, opening for Smashing Pumpkins in arena shows (and frankly being better than them). You could tell they weren't having as much fun by Bleed Like Me, but they were professional and still put on a great show. When they rolled in on this, the second night of their tour with TFF, I was confident in their ability but not sure how the crowd would react.

They played for an hour and squeezed in 12 songs. They did their mashup of "Wicked Ways" with Depeche Mode's "Personal Jesus," which was kind of neat since I had seen that band on that very stage doing that very song. They did their James Bond theme, "The World Is Not Enough," which I've only heard one other time. At the start, I think there were legitimately some people in the crowd who were not aware of them, but by the end of the show, they were fans. At one point Shirley even said they weren't sure how they would be seen by these crowds, and the noise was so intense that she seemed to struggle to keep it together. It was clearly an emotional moment for her. They ended on "You Look So Fine," which they seem to alternate with "Vow" as their last song (it didn't make the playlist this time). The crowd noise lasted well after they left the stage.

It's a weird arrangement, because they've certainly headlined arenas, especially overseas, and I think they're more co-headliners than openers. They barely made a dent in their catalog after an hour.

The main event was on just 20 minutes later. For an hour and 40 minutes they played an incredible 19 songs spanning most of the catalog (only one song from the non-Curt albums). They were accompanied by Carina Round, an incredibly strong singer-songwriter that has worked with them before. The rest of the band was absolutely solid and clearly among the best at what they do.

What's really amazing is that Roland and Curt sound as good as they ever have, now age 60. Roland in particular shows the miles, channeling Gandalf a bit with that long white hair. And he is a wizard of sorts, when it comes to songwriting. But what's clear is that these two are better when together. They've said in a lot of recent interviews that they started this journey working with a lot of outsider help, at the encouragement of agents and the label, but didn't like what they were making. They said they eventually just sat down together with guitars and that led to a lot of what came out.

So confident in the new album, they played 7 of the 10 songs from it, more than any other album. And it absolutely worked out, because they're amazing live. The harmonies on "Rivers Of Mercy" were just stunning. "My Demons" was more intense live than I expected (and the lighting design was epic). "Long, Long, Long Time" was similarly wonderful with Carina's vocal. They also gave her a stripped down arrangement of "Suffer The Children" that was superior to the original on The Hurting. Of course, I was most thrilled to hear "Bad Man's Song," which was 10 minutes of fantastic changes, improvs and solos. If you don't believe me, check out this video shot by the person behind me that includes the back of my head. There were just so many great moments, ending, natch, with "Shout," as one does when you're Tears For Fears.

There are a lot of bands touring on nostalgia lately, and that's fine. As Ken put it, these are the "401K" tours of aging musicians. But what's different about Garbage and Tears For Fears is that they've been at it for a "Long, Long, Long Time" (see what I did there?), and they're still making music that's every bit as good as what they did two decades ago or more. I know, what you call "art" varies from person to person, but continuing to evolve your craft and creating exceptional new things, to me, makes you the best kind of artist.

It's somewhat fitting that this is where I saw my first show in 1988, Def Leppard with special guest Europe. I stood there all the way at the top of the lawn, in the rain, for three hours, with my first date ever just at the end of grade nine. This time, I was six rows from the stage, not in the rain. I've never spent that much on concert tickets ($330 each with all of the fees and taxes), and it seemed like a momentary lapse of reason to do so. I can't rationalize it, but it's been so long since I've been to a show that I figured why not. Experiences not stuff. I don't regret it, and the show exceeded my expectations in every way.

Now the question is, since our cruise got delayed a month, do we go see them in Tampa? 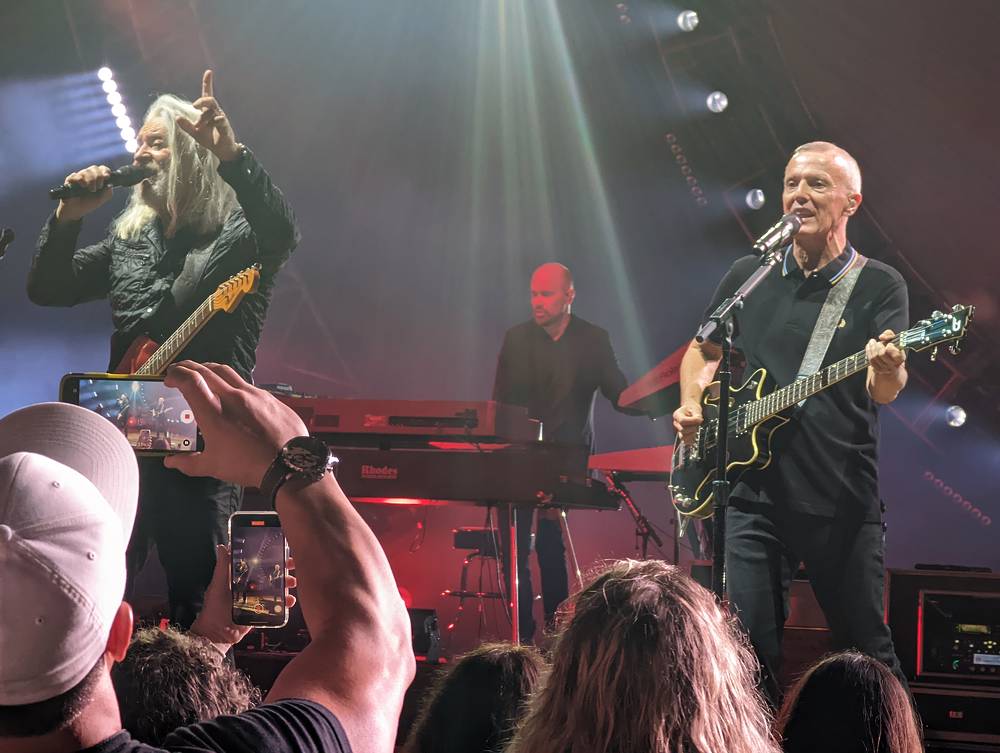 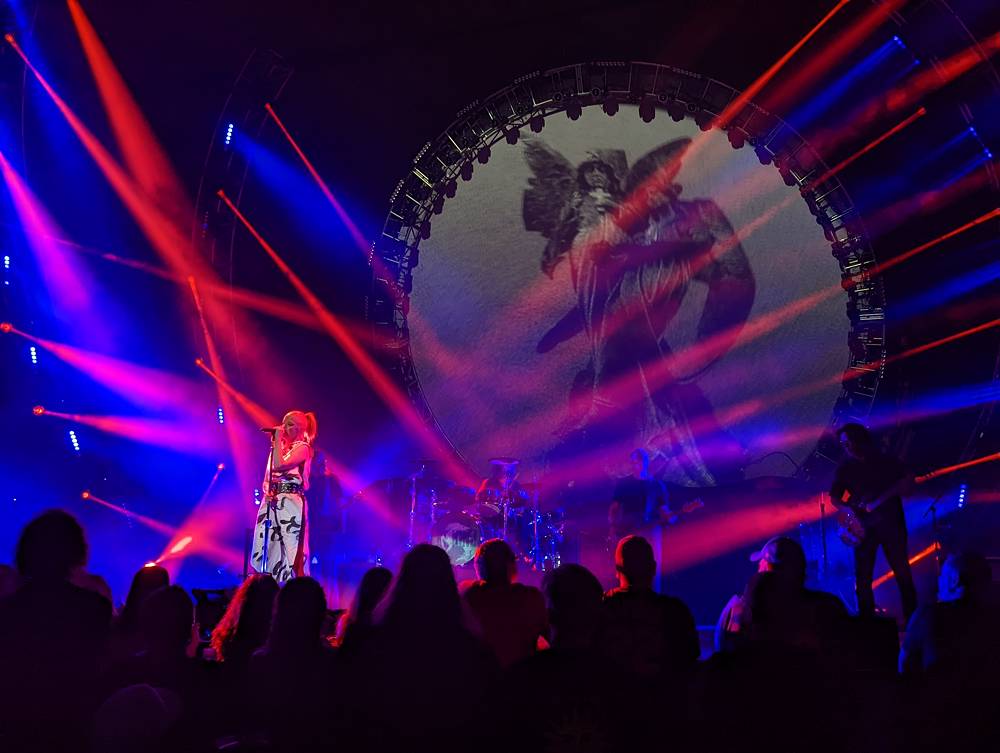