Getting reacquainted with the CoasterBuzz project

It's pretty sad that so much time has passed since I worked on CoasterBuzz v4 that I can write better code to do some of the same things.

The good news is that I got the park and coaster detail pages working, and that's a big step. What makes me particularly pleased is how little code I have to do it. I won't post it (I sent it to two programming buddies :)), but it was neat to use C# 3.0 features, delegates and reflection all in the same area.

I found some more good news when I realized how much better the whole club membership thing is. I shouldn't be surprised that I wrote some of that stuff early on, seeing as how that generates real revenue.

I've now started to get the track record stuff in order. The good news is that I think I can keep the old data. The weirdness is still that you could technically have the same coaster twice if you wanted, or that the two records actually point to the same ride (think X-Flight and Firehawk). Once the data is cleaned up a bit, you'll actually see the listings for previous instances of the same ride (WWRCDBD, I know).

Importing all of the data from the old site takes about a half hour on my laptop. Ouch.

I'm still feeling a little overwhelmed at the scope of what has to get done, but at least I'm not fearful of it. I'm trying to take it one step at a time, and leave new features off the table, prioritized, for future iterations.

I had a Blue Screen of Death, in the virtual sense, on my Mac, which is pretty weird. I run in "coherence" mode, which means that all the Windows junk interacts with OS X as if they're native windows. All of a sudden, it reverts to windowed mode, does the blue screen, and resets. When it's done restarting, it lets me know, as if I didn't already, that a serious error occurred. 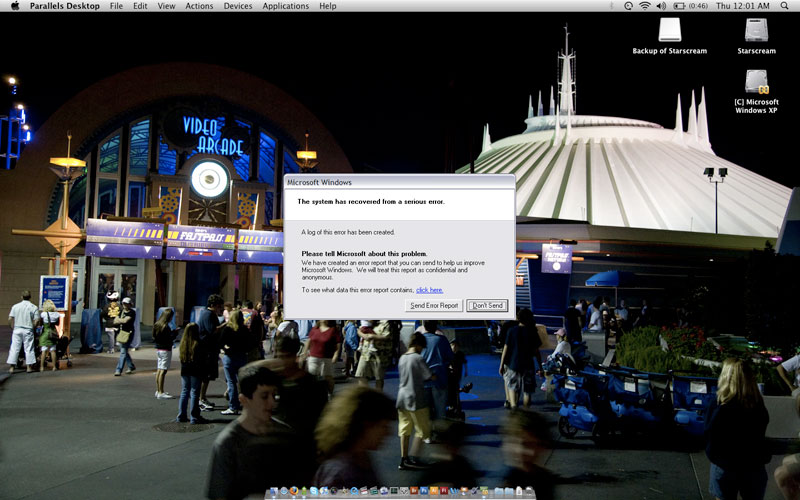