HVAC is a constant struggle

Living where you have endless summer has the disadvantage that you need air conditioning about 10 months out of the year (the other two you need heat, because 60 is "cold"). Our builder, Pulte, installed cheap shitty equipment from Lennox, which had already settled a lawsuit for defective copper condenser coils that turned to mush, especially in Florida. We've already had to replace an inside evaporator coil inside the first two years, though to be fair, that one took a serious lightning hit. I don't imagine that we'll get out of this house before having to replace one of the two systems entirely.

But then there's inflicted and unnecessary harm. I happened to look at the Nest app, as I often do in the afternoon to cool off my office, as it gets to be three degrees warmer in the afternoon than the rest of the downstairs. I noticed that the upstairs unit was reporting a "no power" error, and then it disappeared. Later I noticed that the running history the last few days had been crazy, with a ton of short bursts on and off, even at 8:30 when it drops three degrees prior to bed. I thought, great, maybe the transformer is going bad, if that's a thing.

Then I remembered that the float switches worked by actually cutting the power of the whole unit, which got me to thinking about why they might trip. The condensation drain to the outside has to cleaned now and then with a little vinegar, but otherwise should do a continuous drip while running. Sure enough, when the power switched off, I went in and looked to see that the float switch at the drain pipe had enough water in it to trigger the shut off. The staccato operating pattern made sense. The switch would cut it off until enough water drained to let it come back on.

It was after midnight, but already I was thinking I probably would have to wet vac suck the crap out of the pipe, since vinegar wasn't clearing it. In the morning, after I showered, I went outside to see if they were at least dripping. But a funny thing happened... I couldn't find them. I couldn't find them because they were buried under mulch. The one from the upstairs unit was not even visible, while the top of the other one hinted with a little protruding white PVC. If that weren't enough, there was a bush growing in the narrow space between them. I'd love to find the guy in 2017 that thought planting it there was a good idea, but I let the landscaper know that the ridiculous amount of mulch burying those pipes could have been a water damage disaster if the float switch wasn't there.

So I wrestled out the bush, and in the process found two irrigation soaker hoses that were also about three inches down. The stuff immediately under the pipes had decomposed and packed into a mess of soil and clay, and while it was wet, it was very thick. It was pretty obvious why it wasn't draining, and I was surprised that the other one was. We had the house painted in November, and the mulch was three inches above the end of the paint, so this happened in the last seven-ish months. I noticed my neighbor's drains were just barely above the mulch. Surprisingly, there wasn't much to suck out of the blocked pipe, but the other one had some amazing sludge. Gross. Then I took another shower.

That's two HVAC problems already this year. I think we've earned some consistent operation. I know one of them, probably the upstairs since it's had the most problems, will need to be entirely replaced eventually, but I'd rather spend that money on a new bathroom or something that actually adds value to the house. They almost replaced the condenser coil in the heat pump after the lightning strike, but at the last moment they found a leak where a wire had rubbed through a pipe.

Home ownership is always interesting, no matter how old your house is. 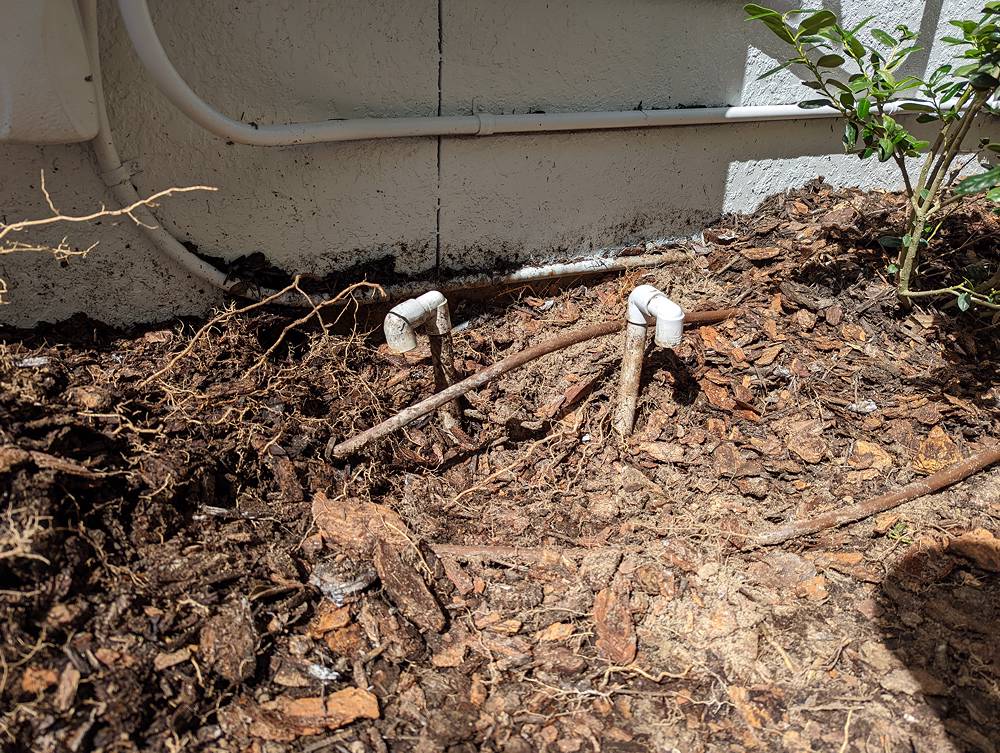