I needed a dad win today

Social media is not, to say the least, the most honest representation of the people who use it. I'm sure that some people genuinely want to portray their lives as awesome as a means of over-compensating, but I think most people just don't want to share a ton of the dark and scary stuff. I'm definitely in that second category. I used to air a lot more of my silliest complaints online, but I don't do it anymore.

However, the last few months have been challenging for me as a father. I'm very sensitive about being Simon's dad, probably because I never had an ideal father situation myself. My step-father was a good man who provided for us, but he didn't take a very active interest in much of anything I did. My biological father only had us one weekend a month at best, so he wasn't hands-on either. I suppose that maybe I'm over-compensating, but I want to get it right for my only child.

He's closing in on 7, in about a week and change, and while it hasn't been easy, it has usually been amazing. Lately it feels less easy, and I find myself being short with him, and reacting emotionally over things that I shouldn't. I catch myself being annoyed with him over things that kids find important. Unimportant things that he does can make me angry, and I can't even explain why. It's not that I want him to live without discipline or not work out difficult situations on his own, but I also don't want to be a douche.

While his challenges with ASD are something I feel comfortable rolling with, now we have a recent ADHD diagnosis to contend with. I felt like this was controversial, because I tend to project my own indifference toward things I don't want to do as his challenge, but the initial low dose of meds seem to be having a positive effect at school, but sometimes a negative impact when his ASD side absolutely must complete or do a certain thing (he can't stop thinking about it). The interesting thing is that his expressive language, which his eval and teacher said was a concern, seems to be amped up with the amphetamines.

With Diana out for the weekend at a quilting conference, this seemed like a good chance to bond with my mini-me, and today was a total win. I let him start the day with some computer time (he's kind of obsessed with Planet Coaster), and he was cooperative about stopping when the timer went off. Next, despite some initial fear that was leading me down the path of feeling defeated, we had some lunch at the Polynesian Village Resort then rented a boat to tool around the Seven Seas Lagoon and Bay Lake. Once he felt secure, this turned out to be a great time, and it wasn't even that expensive (with passholder discount) relative to other touristy things we can do around town. After that, we had a nice afternoon at Epcot, enjoying Soarin' and a few of his other favorites. Of course we ended our day out with Dolewhip. He was fantastic, all day, start to finish, and I was able to handle every issue he had successfully.

My friends are often quick to tell me that we're good parents, and that we're doing a good job, but while I appreciate the encouragement, I don't always feel like I'm doing it right. Too many of those days, and you start to have real doubts. I'm generally OK with failing at stuff, but parenting seems too important to get it wrong. 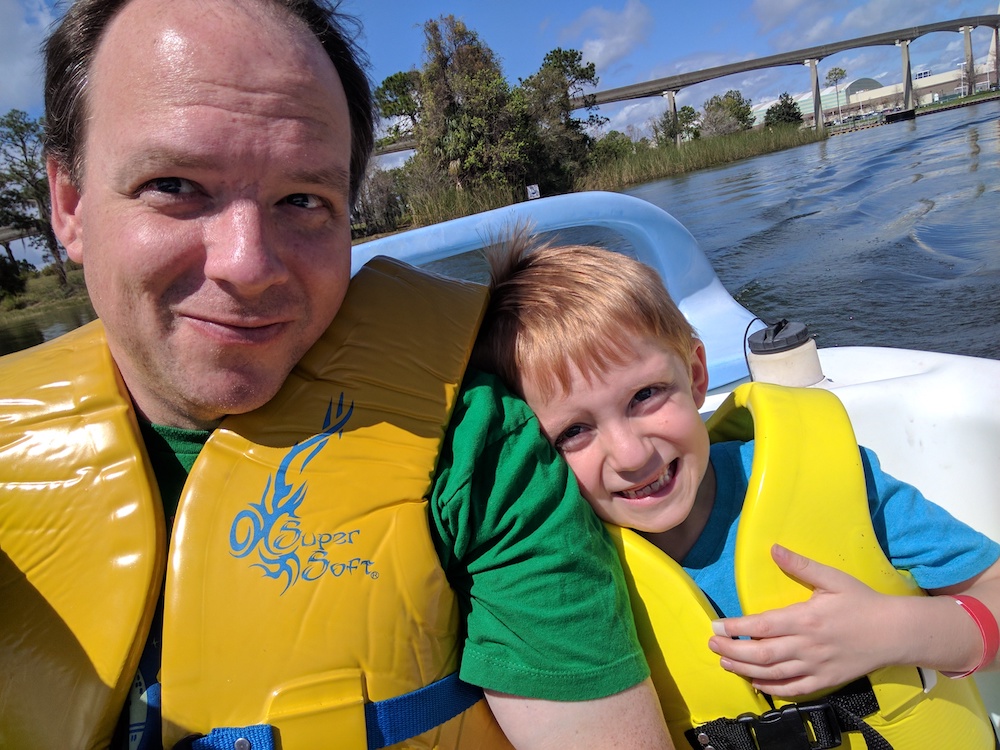 You are totally winning, even when you feel like you're losing. The various challenges he's got going on require everyone to work at it differently, so cut yourself a break, and credit yourself for treading the unclear path with fortitude!