Our Broadway season in Orlando ended last weekend with the 50th anniversary tour of Jesus Christ Superstar. It seems like a small miracle that we didn't have a single show cancelled, although maybe I'm not that surprised given the strict Covid protocols of the touring companies and a robust set of understudies, standbys and swings in every one of them.

I've wanted to see a professional version of this show since I was in high school, because I found the music interesting as a time capsule of sorts from the early 70's. My aunt was in a community theater production around that time as well, which I recall mostly was on a very small stage. It was also interesting to me as the earlier work of the composer that did Phantom of The Opera, Andrew Lloyd Webber. All the theater kids in school had Phantom sweatshirts and what not, and I had a cassette copy of the original cast soundtrack. The JCS soundtrack was rough and super analog. Fast forward to the NBC live performance of the show a few years ago, and it gained new life for me, sounding "bigger" and surprisingly not particularly dated.

Let me say that I'm not particularly interested in it as a religious piece. I believe there likely was a Jesus because the historical record is fairly compelling, as he seems to have pissed off quite a few Jewish and Roman authorities at the time. Whether or not he was the son of God is a matter of belief, and that's up to you. While I border on atheism, because religion feels like a thing to give meaning to our tiny existence in the vast universe, and a means of comfort relative to our mortality, I hold no ill intent toward anyone who chooses to believe. Ditto for any religion, unless you weaponize that religion to oppress, hurt or demean others.

The musical version of these Biblical events center mostly on Judas' role in betraying Jesus, and reconciling that he had little choice in the matter. Jesus also has to reconcile his persecution as the plan of his father. These paint God in a cruel light. Meanwhile, the apostles and Mary spend time contemplating their admiration for a man convinced of his own doom. It's all very dark, were it not for the rock music that goes with it.

It's compelling to me though because the themes of fate and duty are common throughout literature. I mean, we know the Titanic is going to sink, but it doesn't mean there aren't good stories leading up to it. So goes the story of Jesus, attempting to inspire people to be good to each other and calling out that everyone is flawed and shouldn't be casting stones (a lesson that, sadly, seems completely lost on many self-identifying Christians). Add in end-to-end music and opportunities for dynamic choreography, and you have Jesus Christ Superstar.

I wasn't sure what to expect, because we understood it to be a non-union show, though apparently the principles and some others are in fact union. It's not that I use this as a measure of the ability of the performers, but rather it's often an indicator of how willing the the producers are to pay for the right talent in all parts of the production, from the performers to the musicians to the production designers to the touring technicians and stage managers. If you need an example, look back at the non-Equity tour of The Little Mermaid. What a train wreck. There also seems to be some hostility on behalf of Lloyd Webber's production company and unions, exhibited just a few weeks ago when they abruptly canned their London run of his new Cinderella. Anyway, I'm not sure what you call this, because it's mixed. I imagine that post-Covid, unions are willing to make some concessions just so people can work.

The good news is that the show was mostly excellent. The principles were all completely awesome and exceeded my expectations in every way. They were backed by a fairly large band that was also amazing. I can't pick out exactly why, but there are definitely tweaks and improvements to the arrangements compared to the 70's version, and I think they worked those out in the NBC show. Matching the talent on stage was a brilliant set, and a lighting design that was rock-n-roll without being obnoxious overkill. I really loved it.

It wasn't perfect though. There were some really strange choreography choices, not the least of which was humping hips and mic stand stroking to the lyrics, "Touch me, touch me Jesus!" There was a lot of African movement reminiscent of The Lion King, which I did not understand. There were also a lot of frantic jazz hands and Fosse arms that came off a little silly. They did have a "mob leader" role that expressed a lot of sentiment with dance, and that was a good choice to move the ensemble beyond background filler. They had more intent that way.

They also decided to use handheld microphones for a lot of stuff the principles did, and it didn't do anything to add to or advance the story. In fact, some of them were just props, as the priests and soldiers had microphones, but they weren't actually used (they also had traditional headset microphones). And in a particularly awkward way, they used a microphone to imply Judas' suicide.

But the strangest choice was the 39 lashes performed by the ensemble throwing glitter at Jesus. I've said this before, but that entire scene, with a guy angrily counting off to the side, could be cut from the show and I don't think anyone would miss it. Someone suggested that no, it was crucial to the story because the Bible, to which I responded that accuracy isn't essential when Jesus is playing guitar with backup singers. In fact, I just looked it up, and if it was so important, perhaps it would have been mentioned more beyond, "Then Pilate took Jesus and flogged him." That's it? Worse yet, flogging to the limit of 39 times was a Jewish custom, not Roman, and the Bible doesn't count them at all. Like I said, leave it out. It's boring, regardless of how much glitter is used.

Those criticisms aside, I really enjoyed the show, and would absolutely see it again. It's a fascinating case study of Andrew Lloyd Webber's career, because the same guy who made the epic dog shit (cat shit?) of Cats is the same guy that composed this fantastic rock opera about a religious figure, which I imagined was well out of his comfort zone. Also Evita and Phantom. Even School of Rock. And then there was Love Never Dies, quite possibly the worst story ever put on stage. If I can say anything about him, it's that he was brave enough to fail after high levels of success. 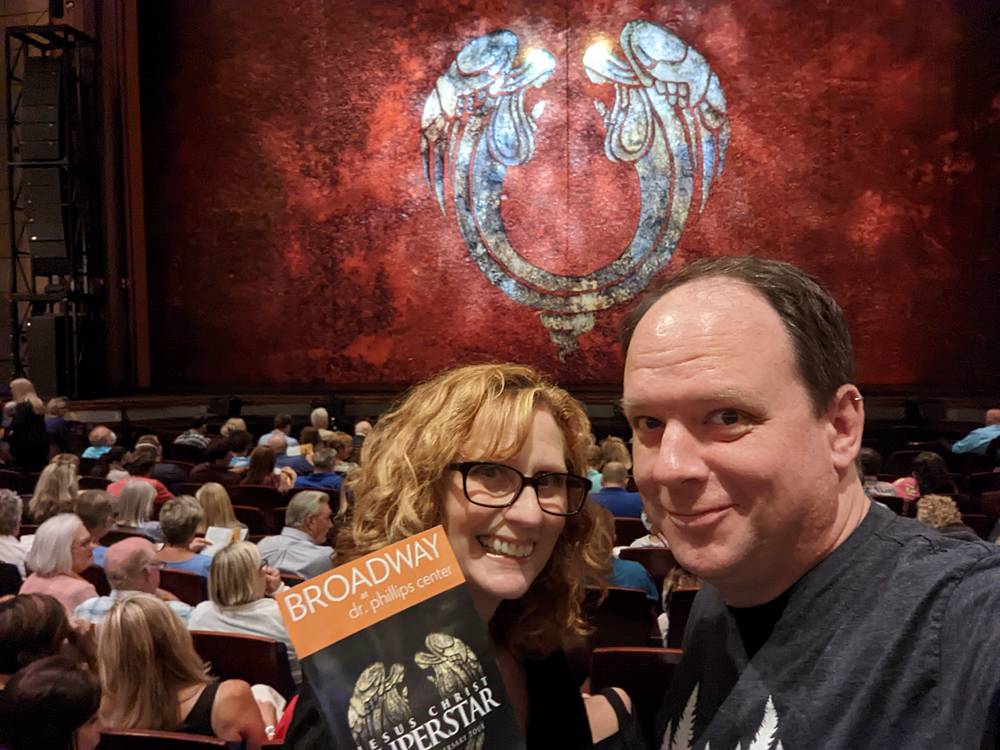