I toured the new Walt Disney Theater in downtown Orlando

Last Friday, I had a very unique opportunity to tour the Dr. Phillips Center For The Performing Arts. It's supposed to open later this year, and so far it includes the main theater, a black box theater and an arts school. After additional fundraising, they'll build a third theater as a concert hall. It's an enormously ambitious project, and the Walt Disney Theater in particular is likely to rival most theaters built anywhere in the last few decades. The mayor's office reached out to local businesses to invite people to see inside (my work office, which I go to twice a week) is next door to city hall and across from the center. I got lucky, as no one else from the office could be there.

I'm sure I've mentioned that I minored in theater for about three semesters, and while I never had the experience or street cred that Diana has (with her fancy degrees and union card and all!), I have always enjoyed it. In particular, I always loved lighting, and I got to do some shows for the community theater back in Cleveland. I've also seen a few shows, so I'm practically an expert. (Kidding.)

To put it simply, the theater is absolutely beautiful. It's both intimate and enormous. The furthest seat in the balcony of the 2,700-seat theater is apparently just over 100 feet from the end of the stage. I mean, it's amazing to stand in there and see the scope of it all, while simultaneously feeling that it's "cozy."

The black box is also interesting because it's so configurable. They can do anything in there. Apparently even local community theater will be able to use the space, which is very exciting.

I'm hoping I can find some way to see it again before they load-in their first show, which I believe will be the touring Phantom company. I'm curious to see some of the technology. While I never worked in the field professionally, I admit that I would have loved being part of a team doing a show every night. Even without being on the stage, there's a high that comes from doing that.

I suspect we'll consider a season subscription, as there are a number of shows we would like to see. It might be something we also donate to, as we certainly feel that the arts are a very important component of a thriving community. 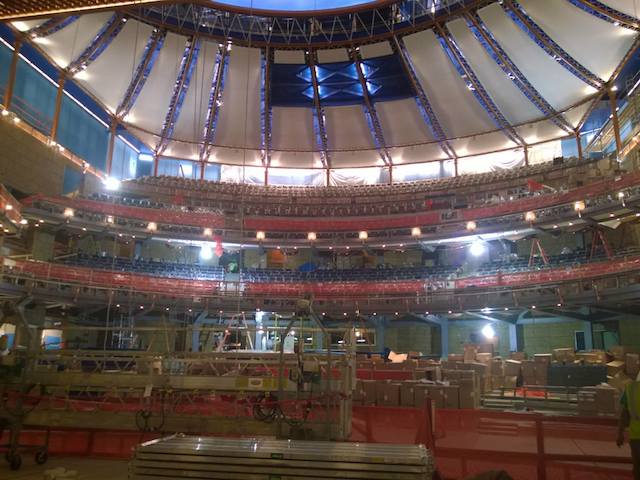