It's all about that bass

It's no secret that I love electronic gadgets. Devices of all kinds have a reputation for being particularly disposable though, in no small part because folks replace their phones ever year or two. In the late 90's and the aughts, I was constantly buying stuff, especially computer parts, in a continuous cycle of upgrading. Things have changed though, because I expect stuff to last longer. My electronic toaster lasted almost 12 years, and I just replaced that. One of my still cameras is 14-years-old, and one of my lenses is 17! My desktop computer has had the same parts since I built it over three years ago. I was pissed that I had to "recycle" a perfectly functional iPad because it was no longer supported by Apple. And quite honestly, I've become especially conscious of electronic waste. I'm careful to drop off exhausted lithium-ion batteries at the recycling bin at my local Lowes.

But among the oldest devices I have, which are not purely electronic, but partially mechanical, are my speakers. About 25 years ago, I bought a pair of Bose 301 bookshelf speakers, and they've been with me ever since. They sound as fantastic as they did the day I bought them (subjectively, of course), and they're not obnoxious like the giant ones that stereo enthusiast bought back in the day. A year later, I bought a center channel Bose speaker, so that's almost as old. I had some inexpensive Sony speakers for surround sound, and they're still in my garage somewhere, but my homes for the last eight years have had built-ins in the ceiling. About 20 years ago, I bought a powered Sony subwoofer. It was 50W, and 6" in diameter, but did a pretty good job for the most part. It seemed to work even better in these Florida houses with the concrete outer walls.

That old Sony had been getting noisy for a number of years. It was especially obvious in movies, many of which do that low rumble sound to imply seriousness and pressure to a scene. I didn't hear at as much in music, but it wasn't clean sound, and I knew this. But I let it kind of sit, and I kept telling myself I would replace it. I shopped replacements at least a half-dozen times over those years. On Thanksgiving, I had enough. We were watching a movie and it just grated on me. I couldn't understand how me, gadget nerd and lover of Sofi Tukker and Armin van Buuren, allowed this to stand.

I bought a nice Klipsch subwoofer, and decided to go big. The replacement is 400W, and a 12" speaker. I've always felt their stuff was a little overpriced, but at half-price, decided to just go for it. Overkill is a good idea with subwoofers, you just need to dial them in to not be overkill. Our living room, with its 25-foot ceiling, benefits from a bigger driver, I think. (It's also great for my moving head DJ lights.) It took some experimentation with different kinds of music to figure out where to set its level and its high-pass filter. You want a bass guitar line to sound rich, but not dominate the sound. I also don't want the low-pass filter to go too high, because those old Bose bookshelf speakers deliver a surprising amount of bass even by themselves. They were the cool units that had the bass port on the side and rear-firing-at-an-angle mid-range speakers to make the stereo separation better.

I speculate that what killed the old Sony was things like Billie Eilish and Marvel movies, which have a lot of bass that did not exist back in 2002-ish. But the new speaker, set at about 30% volume and the low-pass somewhere near the lower end, sounds completely amazing. The bass is thumpy without being muddy. And it isn't noisy at all, obvs. Even older music, which was certainly not mixed as "loud," i.e., compressed, as current music, sounds richer and more complete. I don't know why I waited so long to replace that thing. 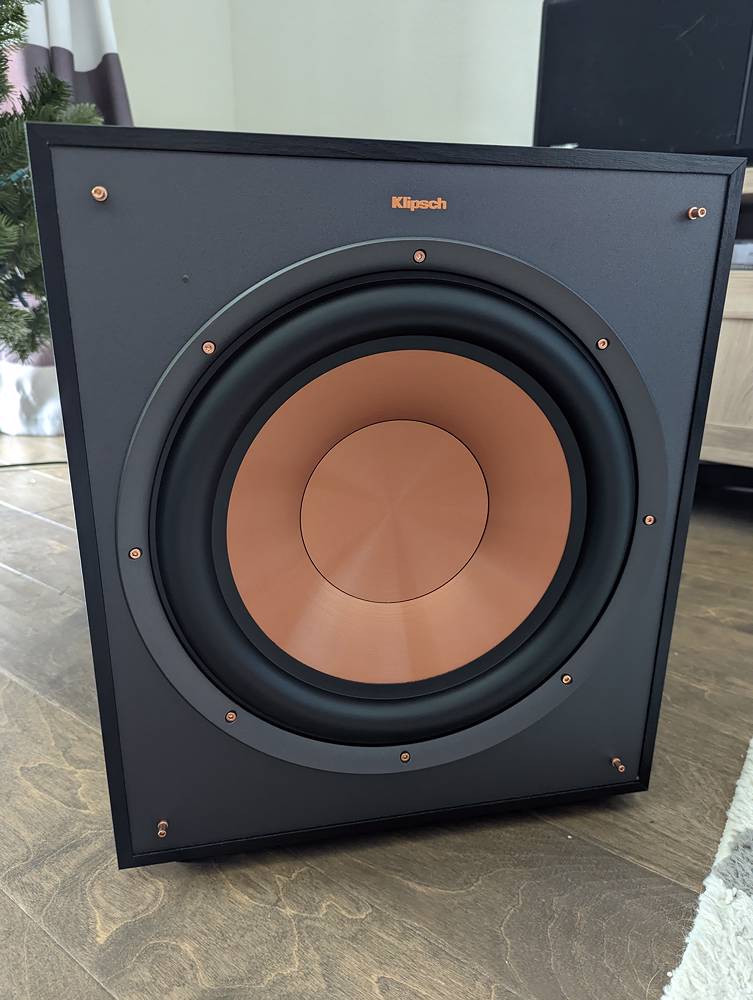