After some test driving and other considerations, we ended up replacing Diana's car with a Nissan Leaf. It's the first non-Toyota new car I've ever had.

Our intentions were basically to try on all-electric for two years, and by the time the lease is over, we can explore other options as battery life and range continue to improve. The motivation was not any kind of green street cred or an idea that we would save on fuel costs, but the economics are still pretty good, as is the green story. Based on some industry study, even using electricity generated heavily by fossil fuels, and the manufacture of the car, it ranks first as having the lowest carbon footprint. And the cost per mile for energy is about a third of the Prius, a fifth of the car it replaces, a Hyundai Elantra. With the federal tax credit being passed to you from Nissan ($7,500), this particular trim gets you from $32k sticker to $24.5k, so your starting point is already below a Prius. Mind you, it's a smaller car, and people want to compare it to its gas using Versa cousin, but I've never been one to compare cars on size.

I don't remember what our net cap cost was after the trade and cash, but the residual wasn't great and the money factor was very nearly free. You do pay a little extra for a short lease. We got the payment down to $106, which I can live with. Other than going off of what other people pay, it's hard to know exactly what you can get away with because of the subsidies and rebates. But based on some of the research tools, I think I did OK. I might have been able to squeak out a few extra dollars.

Our sales rep was solid. He was a total "Leaf geek," as we put it. He owned one, he knew everything about it, was up on EV's in general, and could nerd about everything. And good for the dealer putting a guy with a bunch of tattoos in that position, too. His appearance was not typical for the usually squirrely car sales jerk. He wasn't condescending or patronizing either, and spoke to both of us as equals.

Unfortunately, the sales manager was a total asshat. Not only did he not understand why I wanted all of the lease numbers (cap cost, residual, money factor), but he didn't even know that Nissan basically took the tax credit off the top for leases (if you buy outright, you get that $7,500 back when you file). When he suggested I put more down to reduce the payment, we walked. I felt bad because the rep spent a good two hours with us, but that last hour was wasted. You absolutely have to be willing to leave the dealer if you feel you're being fucked with or not getting what you want.

I emailed the rep as we had lunch (I was really "hangry" at that point), and told him if he could get the numbers where we wanted, we could work it. He got back to me later in the afternoon, and he made the deal I wanted. Basically they reduced the sale value of the car by about $2,200, a little under their invoice and the top number before the manufacturer rebates and incentives, which totaled around $8k. Our real cost, the trade plus cash plus monthly payments, comes out to $356/month for 24 months. Being a lease, of course you have nothing to show for it when you're done, but our conventionally financed Prius V comes out to $450/month over five years and will be worth around perhaps $9k if values hold. Purchasing works out better for you if you intend to keep the car longer than it's financed, but again, we didn't want to commit too hard to electric.

Mini-rant: Why do car dealers suck at getting you out the door once you have a deal? We ended up spending a little over two hours there again before we signed and left. Or rather, Diana did, as we kept this one in her name to keep the license plate transfer simple and keep some credit in her name.

It's worth mentioning that I did drive a BMW i3, and it was awesome. It corners like it's on rails, and the motor is much more aggressive and "torquey," which is saying something because frankly the Leaf torques like a boss as well. Electric motors are awesome like that. I nearly fell in love with the BMW, but I just couldn't justify spending around $450/month on a car. I just couldn't do it. That's three cruises a year, in the concierge rooms at at that. The one thing I did not like about it was that the regenerative braking is super aggressive, to the point where you don't need to brake much in city driving. It's weird, and probably even more weird for other drivers because they don't see brake lights. The Leaf has this feature, but it's not on by default. It's a setting on the Tesla Model S as well.

I'm glad that's over. Buying cars is an awful experience, especially since no one around here would negotiate via email except the BMW guy, and ultimately the "Leaf geek." I'll write some more after we've had it a few months, and see how we do with range anxiety and charging configurations. 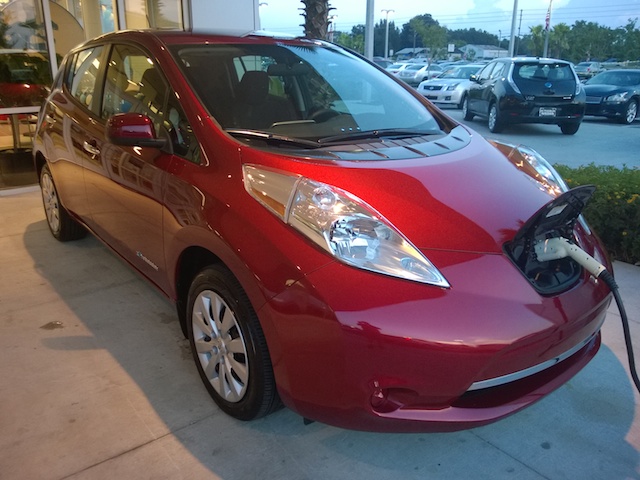