Simon turned one-week-old this morning. What a crazy experience it has been so far. The biggest challenge has honestly just been the feeding, and the fact that it never seems like you can give him enough. The lack of a routine isn't easy either, but according to everything I've read, babies don't do routine until a few weeks old.

We have this thing called an ItzBeen, which we learned about from Joe and Kristen, as they have actively used one for both of their kids in the last two years. It's pretty cool, but I'm not sure how useful it really is the first week or two. I mean, if he's hungry, he tells us, if he poops he tells us, and if he's not awake, he lets us know. We started using it even in the hospital, kind of just as practice. It's slightly useful if we're trying to determine what it might be that he's unhappy about, but it'll be more useful when he's in a routine. Right now, I think it actually affects Diana adversely, because she very much likes to keep score on things, when Simon is more about being as unpredictable as possible. That frustrates her.

What I did not feel at first was all of the "what a miracle" rainbows/puppies stuff that people describe. Granted, I described the horror of the operating room, but even after that, I think we were both more in a survival mode than anything. It wasn't really until the last few days where we started to feel real joy and peace with him (not coincidentally, when he was feeling joy and peace). Seeing these "giant" kids at six and nine months at the doctor's office also forces us to appreciate just how little and precious he is right now. Plus, every day he does new things that are kind of cool, even if they are kind of gross, like farting, belching and making funny faces.

Introducing some amount of normalcy and balance into our lives also helps. We've actually watched a couple of TV shows, Diana has caught up on the FAILblog, I'm making a little headway through my RSS feeds/friend stalking. I even checked my work e-mail, though that was mostly just to delete stuff that would never affect me. (No, Matt, I've not yet watched Ellen.) I don't know how the hell anyone goes back to work right after having a baby. I've been out one week and I can't imagine going back just yet. And it's actually less about the baby and more about making sure that Diana has the necessary support. As Simon's 24/7 buffet, she's with him more by default than I am, and getting less sleep. 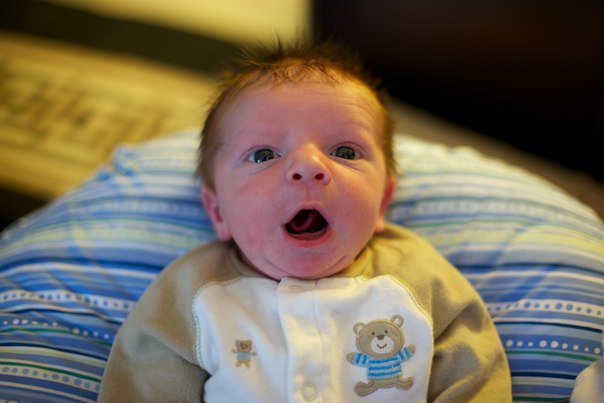 Jeff, that's such a great pic. Congrats, man. It's good to see such a proud set of parents.