We've committed to a regular (remote) therapy routine for Simon after many months off, because it was starting to feel like he never had a good day, and he was the first to tell you that. He honestly asked if we could starting seeing his therapist again. Seeing any kind of self-awareness like that was a pleasant surprise despite the context.

The bedtime routine was going horribly wrong night after night, so Diana figured we should change it. Basically we would nag Simon to do all the basics, pajamas, brush teeth, and he would stomp around flip out about it, and one time he even hit me, which led to a long term suspension of computer game privileges. Then we would lie down with him, alternating between me and Diana, and he would have meltdowns if we left pretty much any time before he fell asleep. It was hard for me after being plugged in all day at work, but I can only imagine Diana's level of exhaustion after sitting next to him "at" school.

Diana restructured bedtime: Now we would spend a little time with him either reading or writing things down, often about what he wanted to do either in one of his computer games, or plans for playing, or whatever was in his head. After that, we would tuck him in and be on our way. Frankly that felt more appropriate anyway because he's 10. To our surprise, this has worked exceptionally well, with only one night that reached the level of uneasy, but not a meltdown, in the last two weeks. There are a lot of reasons this seems to work better that we could unpack, but I never expected that us committing less time would be it. We had some good laughs tonight.

For school, we've identified a number of things. The first is that the technology causes him all kinds of anxiety. If he doesn't hear something or a kid doesn't have a muted mic or he's not in the designated Teams room early, he quickly gets into the danger zone. Something about this scenario also prevents him from asking questions too, so if he misses something or doesn't understand, it compounds the problem. We've also noticed that multiple choice questions leave him in a state where he won't commit to an answer he's unsure of, and he can't just make a best guess. Even with math problems, he'll get the right answer and be so non-confident as to not move on. His IEP requires some extra help outside of class, but this builds insane FOMO feelings, and most of the time he's not getting these services anyway. I want to give the school a little grace, since it's a different world when remote, but they're not meeting the conditions of the IEP.

His therapist recommended getting up and moving around more frequently, which frankly applies to remote desk work, too. Simon doesn't want to, again in part because he doesn't want to miss anything. He's also socially starved, which is tough for a kid who already has a hard time socializing. Fortunately we've started a rhythm of computer game play dates with his cousin in Seattle and some kids from our previous neighborhood, which helps. We're both already horribly anxious about the social angle going to middle school next year, to say nothing of the academic responsibility.

These are the gutters and strikes of our lives. I see a happy boy everyday, but a lot of the time it feels like he's miserable, without joy, most of the time. I felt that way most of my teenage years, and I desperately want him to have a better go of it than I did. I hope we can figure it out. 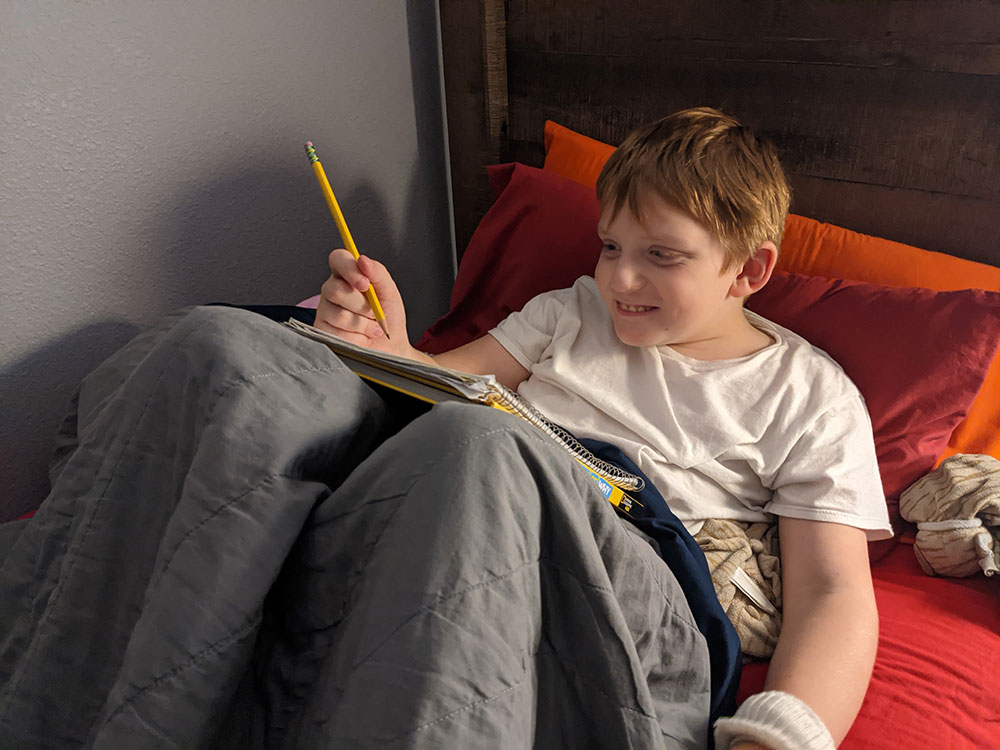