Well, they got me again. Last week, Lego announced a new set, the Haunted House, and I ordered it within two minutes of receiving the email. It came on Saturday. Why? Because the tower of the haunted house had a free-fall drop tower ride in the middle of it. In what universe does a theme park and Lego enthusiast not buy something like that?

It might be my favorite set ever. The roller coaster and Disney Castle are pretty great, but this one combines an architecturally lovely design with some elegant mechanical bits to create the drop tower. And it's all premium: There are no decals.

The drop tower uses a chain to lift a container car up through the shaft. Naturally there's an insert that pulls out so you can put a couple of minifigs in there. Think of it as the carts in the real life Tower of Terror rides at Disney parks, where the people and the seats slide into the mechanism that actually moves up and down through the shaft. At the top, a number of pieces on the car push open a couple of doors, so the minifigs can see out, an obvious nod to the Tower of Terror. At that point, the hook on the chain pulls over the top gear and the car goes crashing down.

Making this a soft landing is what was so interesting to me, and it's brilliantly simple. The car is squeezed between several rubber wheels that are geared toward larger fly wheels on the back of the building, so the force of the car has to turn a bunch of rotating mass inefficiently. It's crazy how much resistance this creates. When that part was done, pretty early in the build, I couldn't believe how "heavy" it felt to turn those brake wheels. Even with rubber bumpers at the bottom of the shaft, there's no bounce. It's a quick, but smooth landing. I did a slow-motion video with my phone, and to scale, it's so smooth. Hats off to the Lego designers who did this.

The rest of the model has a lot of cute details. I think it might be the first one that's ADA compliant, as there's a ramp into the house for the minifig that has a wheelchair. The instructions detail the various artifacts around the house collected by Baron von Barron, which reference previous sets. There's a painting with a small light that, when illuminated, shows a creepy mummy haunting the Baron.

It's also not a difficult build, despite the 18+ age rating. The mechanical bits are fairly straight forward, with only a few gears. You can optionally add a couple of motors for app-based control, but it's one of those things where they abstract the motor control and you couldn't do something different with the electronics if you wanted to. (This is my complaint about the Disney Train, as well... I prefer the old school motors with infrared controllers.)

They refer to this as a part of the "fairground collection," though I'm not sure what other sets that is supposed to include. Perhaps it's the Roller Coaster, Fairground Mixer (a scrambler) and the Ferris Wheel, which are pretty great. I'd love to see more rides. 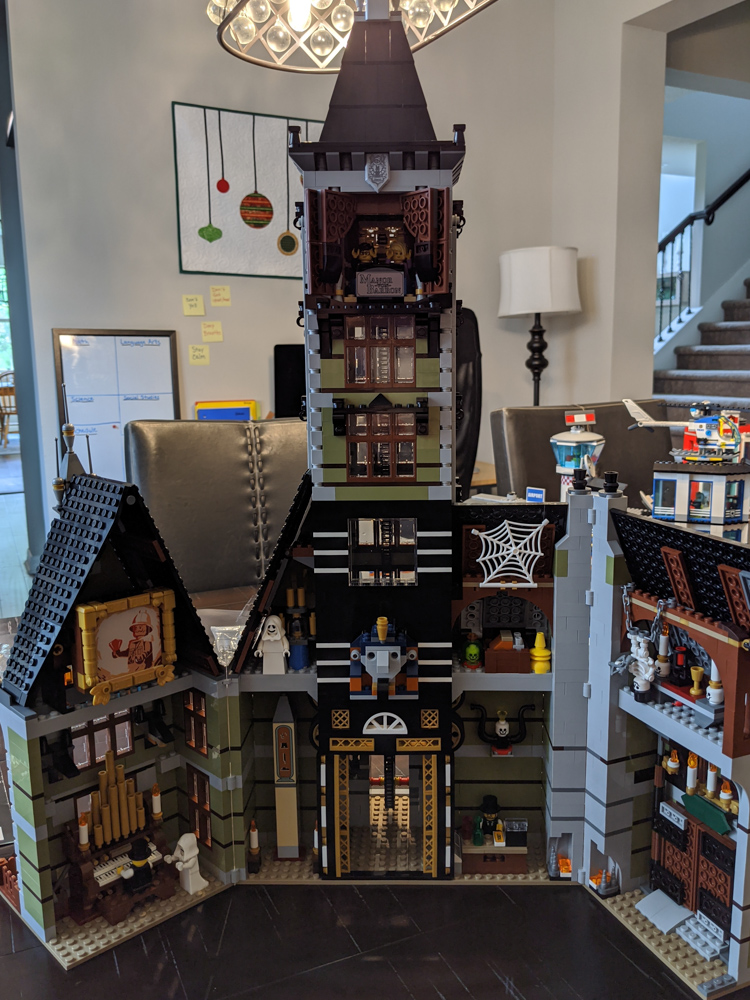