I was a nerd for a lot of reasons in high school, but let me roll you back to my introduction of MTV. In the middle of grade nine I moved from inner city Cleveland to the suburbs, where cable TV was a thing. (No really, they didn't have it in Cleveland in 1988.) I spent so much time watching it, since they actually played music videos in those days. But there were two sets of videos that really pulled me in partly for the music, but mostly the live concert lighting. Def Leppard's "Pour Some Sugar On Me" blew my mind, with the lasers and the moving lights. If that weren't enough, Pink Floyd did a series of videos from their Delicate Sound of Thunder live album. This was remarkable because they had all of these automated lights placed around a round screen, and they could do patterns on the screen as well as point them all at various places on the stage. Then they had random moving lights out over the crowd. It was all completely amazing to me. All I knew was that these moving lights were called Vari-Lites, because they had a logo on them. They were kind of boxy looking.

A year or two later, at the Ohio State Fair, I was sitting in a grandstand show to see Mike + The Mechanics play, and I parked my ass right behind the lighting guy. There I saw a console with Vari-Lite's name on it, and during the show I tried to decipher what he was doing, but it was mostly pushing a "go" button over and over.

Teenage me felt like I had found my calling. I was going to be a concert lighting designer. Sure, there were probably like a dozen people doing it at the time, but that seemed like a pretty rewarding thing to do with your life. When I got to college and started minoring in theater, I was surprised at how analog and primitive the lighting in the theater was. This was decades before LED's, and you changed colors by putting gels on the front of the lights. The back wall of the theater was packed with analog dimmers. The lighting board we had didn't even have any kind of memory. It had two rows of faders, and for each cue, you set all of the faders on the non-live row, and then pushed the button to swap them, then did it again. Just before my senior year of college, I did the design for my community theater's show back home, and they at least had a system that stored all of the cues in memory, so I was like the guy at that show, pushing "go" over and over through the show.

At some point I learned that Vari-Lite was the only game in town for moving lights in the late 80's, and you could only rent the equipment, along with an operator and technician. I think I learned this from someone at High-End Systems, which was exhibiting at IAAPA (the amusement industry tradeshow) in 2000. They were a big deal because they were making lights with a mirror that moved, instead of the entire head, which obviously moved a lot faster. And if that weren't enough, they were breaking into architectural lighting, which is why they were at that show. Their equipment was on Cedar Point's Millennium Force roller coaster that year. What was kind of neat is that the non-moving mechanism on their architectural fixtures was the same one in their mirror-based Cyberlights. They were so cool!

But going back to high school, I was designing shows in my head for all kinds of stuff. I remember that Depeche Mode's "Clean" in particular had a very specific show in my head, and I can't tell you how disappointed that I was when the one they toured with frankly was boring. The Best of The Art of Noise had all kinds of shows in my head. When INXS's Live Baby Live album came out, I never saw any associated video, so I made up stuff in my head for that. For a long time, anything I heard came with lights.

As time went on, life got in the way of my lighting interest. And even though I went to fewer shows as I got older, the ones I went to were pretty uninteresting in terms of lighting. But I do remember seeing The Naked and Famous in Orlando in 2014, a small venue show, that had surprisingly interesting lighting, despite not having a lot of fixtures to work with.

In the time since, I noticed that the technology had evolved quite a bit. DJ's were bringing in some impressive stuff not just for the dance floor, but they had these color washes they would put around the room. Architectural lighting was appearing almost by default. And then we got super involved at Dr. Phillips Center, not just for the traveling shows, but the venue itself. To this day, I've only seen some of their toys from afar, and haven't been able to actually play with any of them.

But with all of this ubiquity came the observation that it was a lot cheaper than it used to be. There's a flood of no-name stuff flooding in from China of dubious quality, if you're adventurous. A few US companies like ADJ and Chauvet (the latter is based in Miami) have their stuff manufactured in China, but there's a lot more QA involved. The lights are mostly LED-based now, so no lamps to replace. DMX is still the control protocol, and you can get a USB to DMX interface for $25. The more affordable moving lights still use color wheels, but at some point (in the thousands of dollars each) they start to use color LED's that you can infinitely mix to any color, plus UV. It is absolutely remarkable to see what's out there.

My friend Ken nerds hard with lasers, and he's been doing shows for years. I respect that. But me and my teenage obsession? I last sat behind a console in 1994 for that community theater show. So I started to look at what's out there. There are a lot of interesting moving washes with multiple cells for around a grand, but they don't put out those sharp spots. You also can't really get a fixture with RGBW light sources without forking over a few grand, so you do have to roll with color wheels. Beyond that, there are other compromises to consider, but my criteria eventually landed on a reasonably bright light, 75W or more, at least one prism to flare out the patterns, rotating gobos, and motorized focus. The thing in that range that wouldn't kill me financially for years was the Chauvet DJ Intimidator Spot 260, so I finally bought two.

After having a pair of these for a day, I'm super impressed. I've been learning how to use MA dot2 software along with it, which seems pretty powerful (even if it is discontinued, it's free). I came up with a nice slow movement to use at Halloween with the fog machines going. It's also kind of fun just to turn on sound mode and let them do their thing with tunes playing. They seem like a really solid product.

And yeah, I might see what I can do with two lights and "Clean" playing in the background. 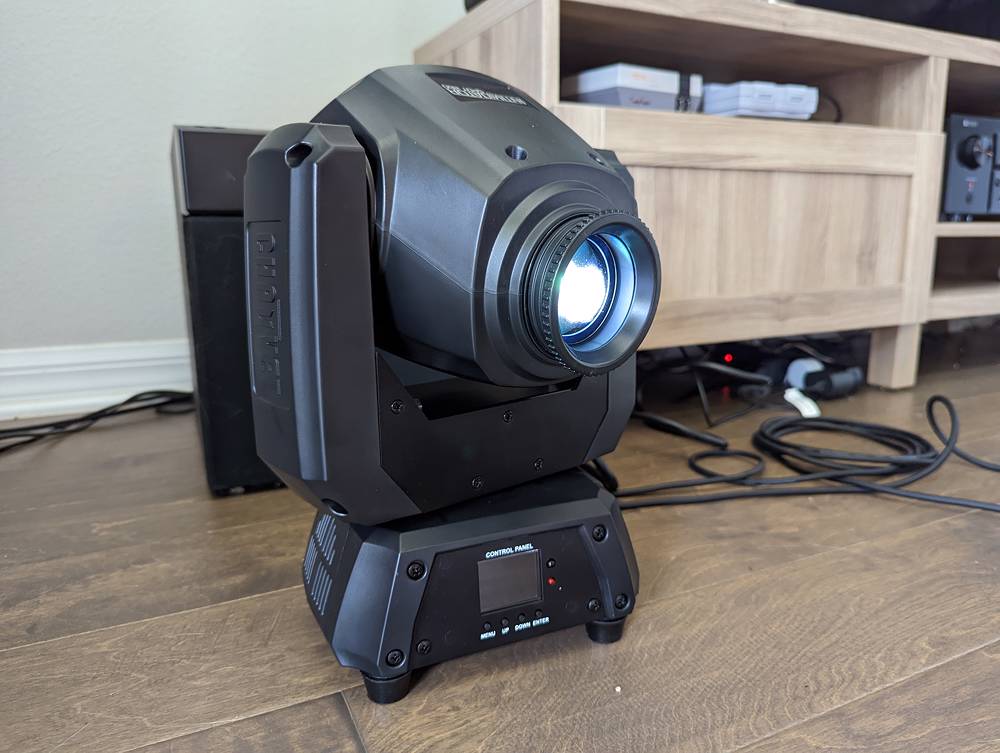 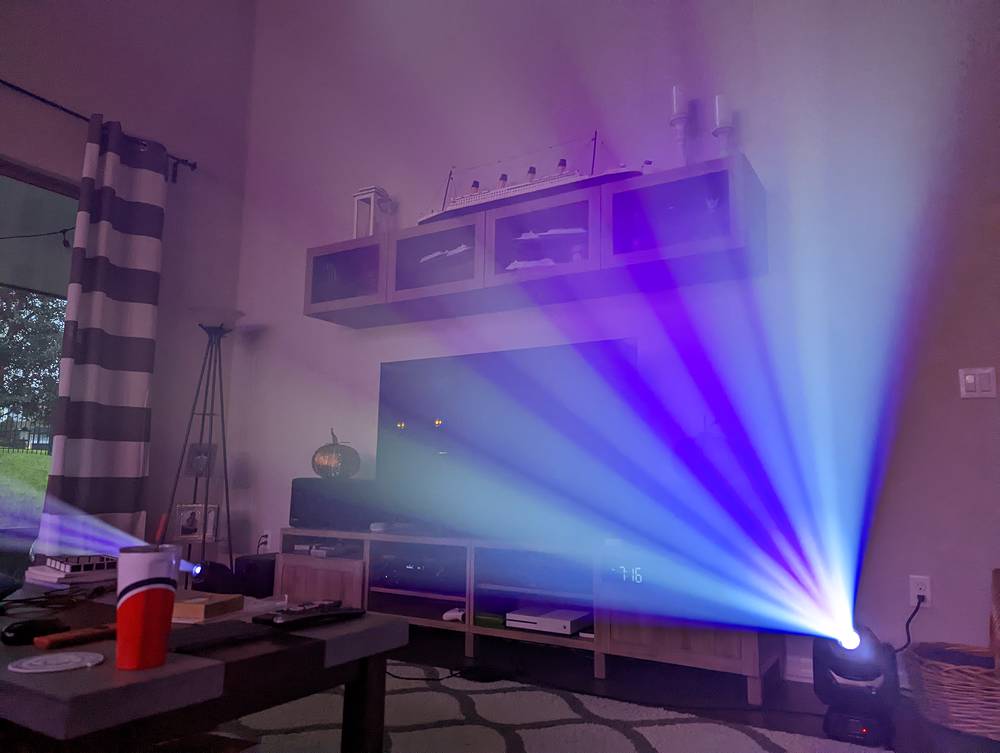