We finished up our Broadway Series season this week, after seeing seven shows. I really enjoyed myself, as did Diana even though she also works those shows. It's not an inexpensive endeavor, and I wish more people could see live theater, because there really is something very special about talented people coming together to create, support and perform a show. And to do so in such a beautiful new building is icing on the cake. I love going downtown for dinner, then spending an hour or so just hanging out with drinks on the patio there. It's probably the best kind of date night we can have without leaving the area. 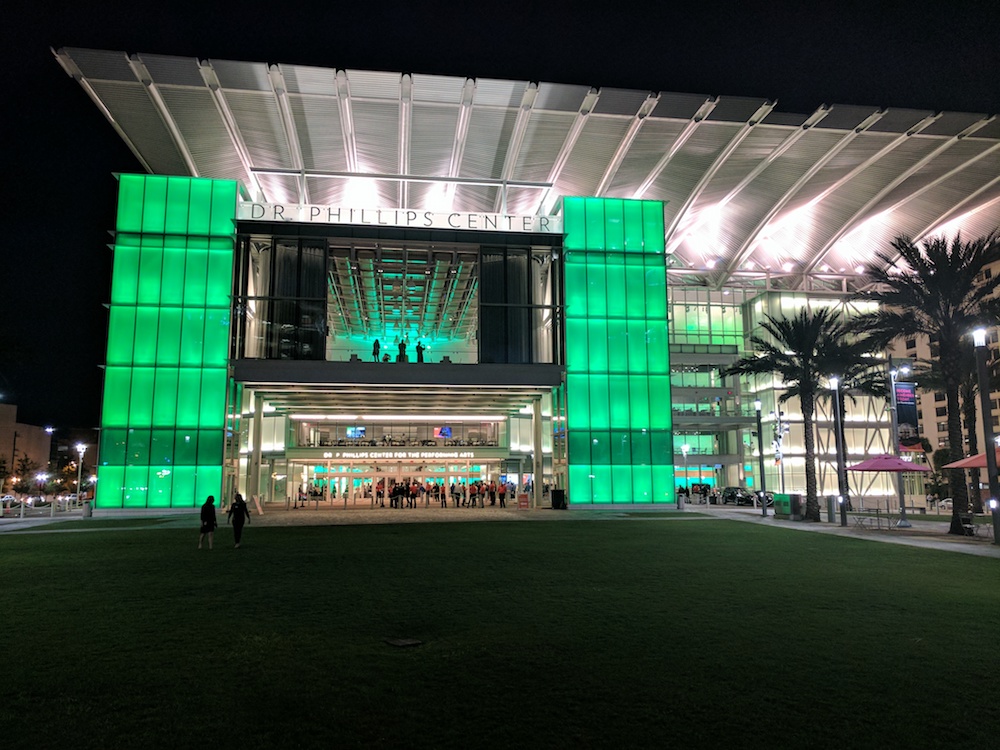 The Dr. Phillips Center For The Performing Arts in Wicked green. Frustratingly, they don't play with the amazing architectural lighting they have in place very often. The third theater, the acoustic theater, is now under construction in the space on the left.

I wanted to write a quick recap of the season, by show. We sold our tickets to our neighbors for the first show, The Illusionists, because we weren't really that into the idea of seeing a magic variety show. For the most part, this was a really strong lineup, and better than the previous year (we weren't subscribers, but did see a few shows).

The Curious Incident of the Dog in the Night-Time

I mentioned this show back in November because, quite obviously, a show about a kid with autism is going to generate a brain dump. It was the only non-musical show of the season other than Illusionists, and I thought it was brilliant. The material is challenging because you have to try and convey what it's like for a kid who is wired differently, and create empathy for that different view on the world. And if that weren't enough, the production design did a remarkable job of helping tell that story, without being too gimmicky.

An American in Paris

If you like classic Gershwin tunes and singing and dancing in old Hollywood musicals, this is all of that on stage. I don't think I ever saw the film, but I had a basic idea of what to expect, and it was definitely entertaining, if not the deepest thing I've ever seen. It was a bit long, and probably could have ended a good 10 minutes sooner.

You know, Wicked is one of those cultural phenomenons that I knew I would eventually see, and to that end, I tried for years to not really learn too much about it. (I was going to do that with Hamilton, but failed entirely.) I only knew the music through peripheral contact, and the stars of the original Broadway run by way of what they did after. So beyond high expectations, I managed to go into the theater without knowing too much other than people love this show.

It definitely did not disappoint. The hype was all justified. It's a great show, start to finish. The music did not entirely grab me at first, but the more I heard it around the house, the more it has grown on me. I think I'd like to see it a second time, because there are things I'm sure I missed. The thing I walked away with the most is what a slamming critique it is of our society's tendency to fear the people we don't understand. It's not even subtle.

As a bonus, we made a new friend in the show who went to high school with a former girlfriend, and it's been fun to see him document his adventures on tour around the country. He showed us around backstage, and silly us, we didn't get a selfie with the Wizard of Oz. It's also crazy to see how much heavy stuff they fly in that show.

A Gentleman's Guide to Love & Murder

Another show that I didn't know anything about other than seeing it on the Tony's one year, but it ended up being fairly hilarious. I think you can often get away with cheap laughs in theater, and there were plenty, but it was also clever. You'd think that reviewing clever ways to kill people wouldn't be that funny, but there it is.

Let me get right to it.. the nostalgia wore off by the intermission. I tried in my mind to even defend the show for a few days after that, but it was pretty fucking terrible. I saw Disney's Lion King in Vegas some years ago, and it blew me away, so I expected they wouldn't screw up a classic. But alas, they did. The production looked cheap, the humping mermaids were weird choreography, and the new songs didn't really improve the story. The actor playing Sebastian got some good laughs, but that was one of a small number of bright spots. The plot changes from the film were more filler than anything, and an excuse for the lead to sing what was in her mind when she has no voice.

I adored this show and it surprised me. I didn't know the underlying story from the book or movie in any detail, so the storytelling inside the story and how it became another character's story was brilliant and surprising. The abilities of the child actors were staggeringly amazing. They were so good. This was also the show that I felt had the best scene and lighting design (sorry, Wicked), as it served the story perfectly without being a spectacle. This was my favorite this season, and I'd love to see it again.

Our last show, just this last Wednesday, the same day we returned from our 5-night cruise. I knew more about what to expect in this show in terms of plot, and I can happily report that it delivered. Again, the children were great (as was the dog), and there were plenty of laughs. It's another one of those musicals where the music doesn't particularly leave an impression, but it's contextually entertaining. Like all of the Peter Pan fiction that has come since, it goes pretty deep into the exploration of mortality, and there are some moments that are very serious. In fact, there's a beautiful "death scene" in this show that is beautifully elegant, and I'd high five the production designers if I could.

Overall, I'm sad that we're done for the year, but the next season begins in September. There are more shows, nine total, but it's more of a mixed bag. I'm not that interested in On Your Feet!, and we're already groaning about the Phantom sequel (which we'll see if only to confirm the groans). Rent is coming, which I like as a story but have never understood the love for it or the music. Also, we'll see The King and I, which is a classic, The Book of Mormon returns and I'm stoked about that, School of Rock, The Lion King, which I've seen before, Waitress and Something Rotten. Being a subscriber this year means you'll be there for Hamilton the year after, and I imagine we'll do our best to see that more than once.