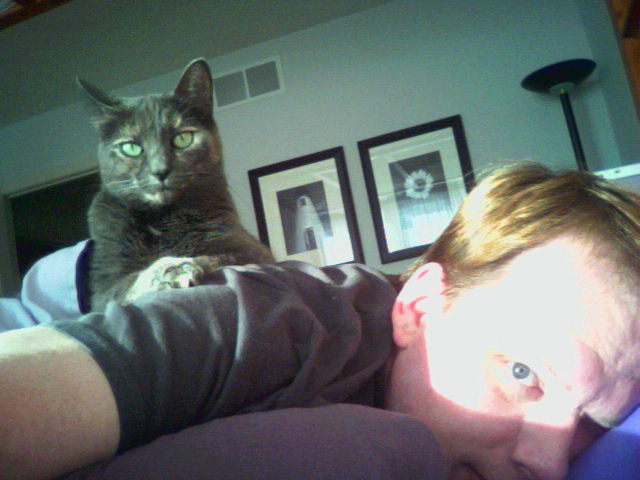 Luna passed away peacefully here at home this afternoon, surrounded by me, her sister, Catherine and Dr. Julie.

About five years ago, Stephanie's mom dropped by the house with this nervous, tiny little kitten that needed a home. As much as I didn't think I wanted another cat, I remember thinking that we could have as many as we wanted now that we had a house and not an apartment. So with some reluctance, we kept her. I was unemployed at the time, and it was nice to have the little fur ball to distract me.

Of course, Cosmo didn't much care for her, because she was used to running the joint. For the first few months, we confined her to the upstairs. We kept her in the spare bedroom at night, and she would cry and cry, either because she didn't want to be alone, or she just didn't want to be confined. I remember there were some nights where we were about ready to give her back.

She also started pee where she wasn't supposed to, and this was something she did periodically right up until the end. At first it was like full bladder dumps, but it got to be more markings than anything. She quickly ruined the one downstairs room's carpet.

In her first year, she started to have vomiting spells that lasted six hours or so. She would make this horrible howling sound and then let it go. It was absolutely heartbreaking to hear it. We took her to a lot of vets to try and figure it out, but no treatment seemed to work.

Generally through her life, she had spells where it was better and worse. I remember during the summer of 2005, which was a very tough time with the separation, Luna went as long as a month without throwing up. It gave me a lot of hope that she was finally growing out of it.

The last few months, after new treatments and drug cocktails, the frequency and duration of her episodes increased. She was sick last Sunday night up through Thursday, and barely kept any food down. I always said that if she was suffering more than the was well, I had to take care of her. Despite being a little more perky today, I knew it was time.

Despite all of the carpet destruction (after all, the builder used cheap crap that was wearing quickly anyway), she was a good cat. When she was feeling well, she'd get nutty and worm around the floor on her back. It was the only time her nervousness and hyperactivity was funny.

She really loved Steph when she was here. In her earlier years, it was a nightly ritual for her to jump up on the bed and start kneading right on her neck. Eventually Steph figured out the ideal position to allow this and not have it hurt, and Luna would bitch until she got it right.

Luna would do the same thing with me, when she didn't feel good, between my arm and my body when I was lying down. She was really affectionate when she wasn't feeling well, which was a strange irony for me. When it comes down to it, that was her way of telling me that she needed me to make it better.

Of course I'll always remember her, and she had a pretty good life, even if it only lasted five years. The sadness I'm feeling right now is pretty intense, and it was one of the hardest things I've ever had to do. My temporary misery though is better than years of it. I would've felt bad if I came home from work one day to find she died alone. I'll miss her.

I'm very sorry for your loss. At least she passed away surrounded by the people and animals that loved her.

Limited time with a pet, is better then no time at all. My nine month old German Shepherd was diagnosed with Leukemia. Chemotherapy or a graceful exit. It was a tough choice, but I made the correct decision.

Sorry for your loss.

So sorry to hear of Luna's passing. I'm here to talk if you need an ear.
I had a "stifle" day today... my boy's been gone only a year and it feels like it's been ages since I last saw him. Hard to bury the face of someone you really love. I understand that all too well.

This sort of loss is hard on you emotionally and physcially. You almost go through a phase of wanting to live life backwards because that would put you 1 day closer to the last day you saw them.

The important thing is; her days of sickness are over. She's in a better place - and you can live on knowing she's happier.

Safe Journey Luna. I hope you are at peace outside of rainbow bridge.

You're in my prayers J.

Very sorry for your loss.

I don't know what to say. As a fellow pet owner/lover I can't imagine what that must be like.