If there is any particular food porn that has made its way from my phone to social media over the years with any frequency, it's definitely Dolewhip. For the unaware, Dolewhip is pineapple soft serve made by the people who sell a bunch of fruits and vegetables. It's largely famous for being sold at Walt Disney World and Disneyland, as well as their Aulani resort in Hawaii. Our favorite place to get it is the little Pineapple Lanai stand at the Polynesian Village Resort, which is easy enough to get to by monorail or boat when leaving Magic Kingdom. My favorite way to get it is as a float in pineapple juice, swirled with vanilla soft serve.

When the pandemic started and the parks closed, the official blog or the park app or something released a recipe for Dolewhip, and the Internet went nuts about it. When the park fan sites (which are generally a little... let's say "enthusiastic") got a hold of it, there were all of these discussions about whether or not the recipe was authentic. The hype was nuts, and people reported different results regarding the authenticity of the results. Here's the reality though: Dole offers a recipe right on its official site. Disney released a recipe on their park app, and it included actual vanilla ice cream and chunks of pineapple.

But let me spoil all of that: Dolewhip comes from a powder mix that anyone can buy on Amazon. Sometimes a local ice cream shop even has it. It's dairy-free and vegan-friendly. If you look at the ingredients, it's mostly sugar and water. Its origins are completely uninteresting, despite its deliciousness.

Because it makes me happy, and because I have the ice cream maker bowl for our stand mixer, of course I plopped down the cash for four pounds of pineapple flavored sugar powder! Reading about the physics of ice cream and soft serve, and even looking at the instructions for the freezer bowl, I wasn't entirely sure about making this work, but what the hell else do I have to do in quarantine mode?

Let's start with ice cream, and how it's made. While all the stuff in ice cream has a lower freezing point than water, if you just mix it up and freeze it, you can't eat it because it would be a solid block, like ice. The trick to making ice cream is getting a lot of air into the mix as it freezes, which is to say they make it foamy. They put the mixture in these big refrigerated vessels with augers constantly moving the liquid around, and it thickens up as it gets colder. The trick, it seems, is to make sure that none of the ice crystals get too large, which is easier if you keep moving them around each other. With regular ice cream, the really good high-fat content stuff, the fat also increases the viscosity even before you freeze it. Once the ice cream is poured into a container, they push the containers through a freezer.

So how was this going to work with Dolewhip? It might be all sugar, but there's no fat. It has the "stabilizing" agents of various kinds in small quantities, and coconut oil, but it still seems like it's mostly sugar water. I wondered, what is vanilla soft serve mix made of? Turns out, mostly the same thing. There is some small amount of dairy substance, but not much. Soft serve machines essentially do the same process as an ice cream factory, turning the liquid in a refrigerated cylinder with an auger moving it around, and they operate at an interesting temperature, usually in the low 20 degrees Fahrenheit range. The Dolewhip recipe is about 4 to 1 water to mix, and I learned that the freezing point of 4:1 sugar water is about 27 degrees. It's all starting to add up!

The KitchenAid bowl is filled with some kind of fluid that freezes, so after a night in the freezer, you fill it with your ice cream mixture and turn it on. The bowl pulls the energy of the mix into the bowl, which begins the freezing process. The official recipe in smaller parts works out to about a cup of the dry mix with four cups of water. The instructions to prepare a whole bag involve agitating it with a half-bucket of water, then once it's dissolved, add the other half of water. I speculate that it's easier to dissolve it in less water, then dilute the solution, so I bust out the whisk after two cups of water, then add the other two.

After about 25 minutes of stirring, the bowl is very nearly overflowing. But it's also pretty soft, and not really ready to eat. It's close in the stuff on the edges of the bowl. I transfer it to the freezer in a small container, and it seems to get to the magic temperature about three hours after that. It's pretty much the experience in the theme park, and it's magical (and also a lot cheaper).

As you can guess, the trick is getting it to the right temperature. Our freezer is set to -2, our fridge is 35. The magic spot is around 25. So there's a game of transferring it between the freezer and the fridge, and it's destructive. If it melts too much, it freezes back into something that's more like ice and not soft serve. For the three of us, that one cup of mix makes about three servings each, and the last one definitely has a texture that's different. I may try to make a half batch next time to see what happens.

There are two impractical ways to solve the temperature problem. One is to get a small freezer with digital temperature controls to store nothing but our Dolewhip at precisely 25 degrees. That would be silly. The other is to get an actual soft serve machine. That would be borderline insane. On one hand, I could make twist with vanilla, on the other hand, it makes so much product that we'd have to invite the neighborhood over to clean it out. 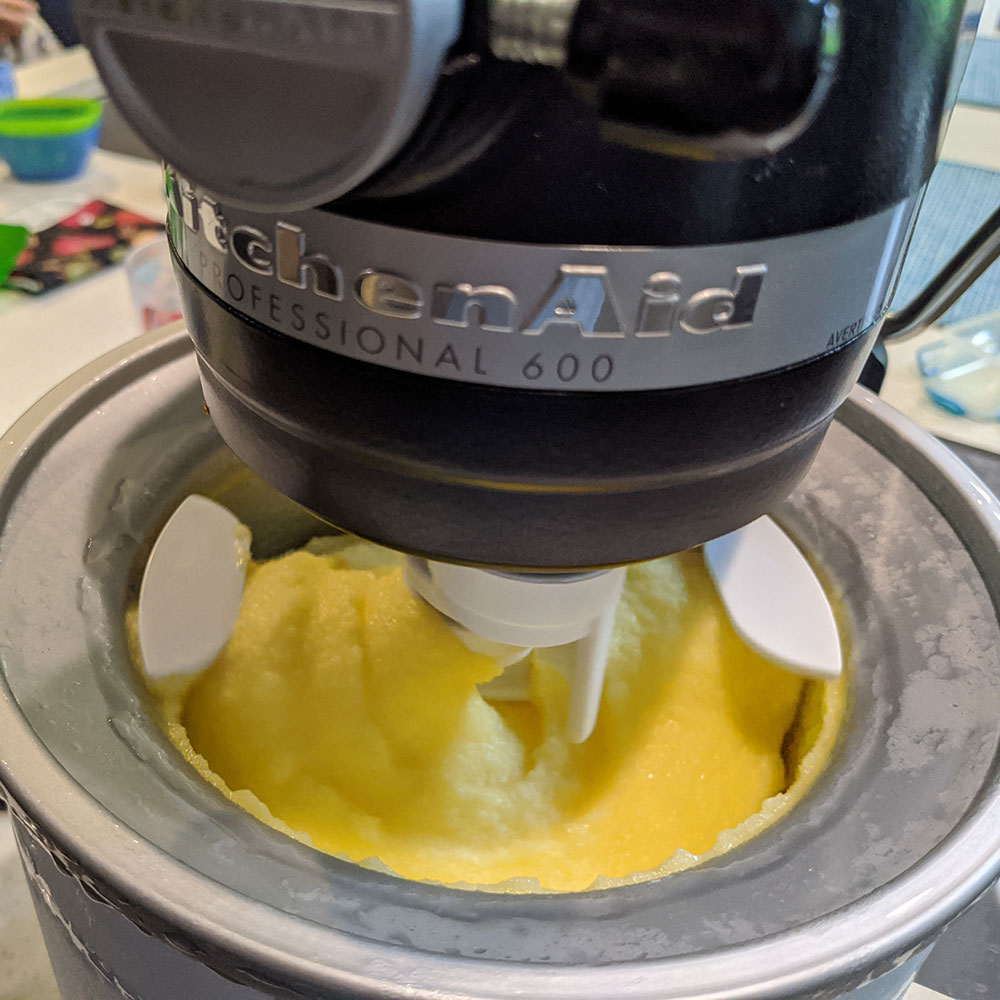