One of the cool things about the installation of the Powerwall last week is that we now have total energy monitoring. The solar by itself includes aggregate reporting about generation, but without matching it against actual usage, the overall story about how and when we use energy is not complete. At best, I have the electric bill that shows how much we pulled from the grid, and how much we put into it. That isn't that interesting at the macro view of a month.

So a little about what the installation changed. The Powerwall is just a big, 14kWh battery. You can use it in two ways: Either to back up the house when the power goes out, or to shift power generated during the day to power the house at night. If the difference between your generation and usage is the amount of the battery capacity, then the latter scenario makes sense. But we don't have the generation or storage capacity to cover it, so it doesn't make any difference if we net-meter our excess day power back into the grid and pull at night. Not only that, but in the case of power outages, you can't keep the lights on if the battery is just time shifting the power for you. I like to keep "exercising" it, so I let it discharge down to 90% during the day instead of keeping it topped off at all times.

The key ingredient here is that the ancillary battery hardware includes the gateway, which will disconnect the system from the grid in an outage. You don't automatically get that with a solar system, but you need it because during an outage, you don't want to be feeding power back into the grid and electrocute a line worker who doesn't expect power there. We also had to shuffle our loads around, because the whole house can't be powered off of the battery, which has a maximum output of 7 kWh. The house was wired with two 150a panels, plus one of the two heat pumps (no idea why it isn't both) feed directly from the main box. So inside, they grouped all of the big stuff, the oven, range, AC, car charger, water heater into one, and everything else, including the fridge into the other. The "other" is what gets backed up. It collectively uses around 300W for the most part, meaning it could last almost two days without sun. During the day, there will be so much excess power that I can invite a neighbor to plug in some fans or something. So yeah, we'll have no air conditioning in an extended outage, but the alcohol will be cold and we'll have ice forever.

The battery came online at a time when we're in the middle of crazy hot, dry weather. We normally top out at 92 during the middle of summer, and only briefly because of daily afternoon thunderstorms (it's even cooler on the coasts). For whatever reason, we're into the second straight week of hitting 100 with no rain in sight. We're in our worst-case scenario for energy usage. Just last month we only took about 350kWh from the grid (around fifty bucks). It'll be way higher now.

You can stare at the app all day to see how you're doing on an instantaneous basis: 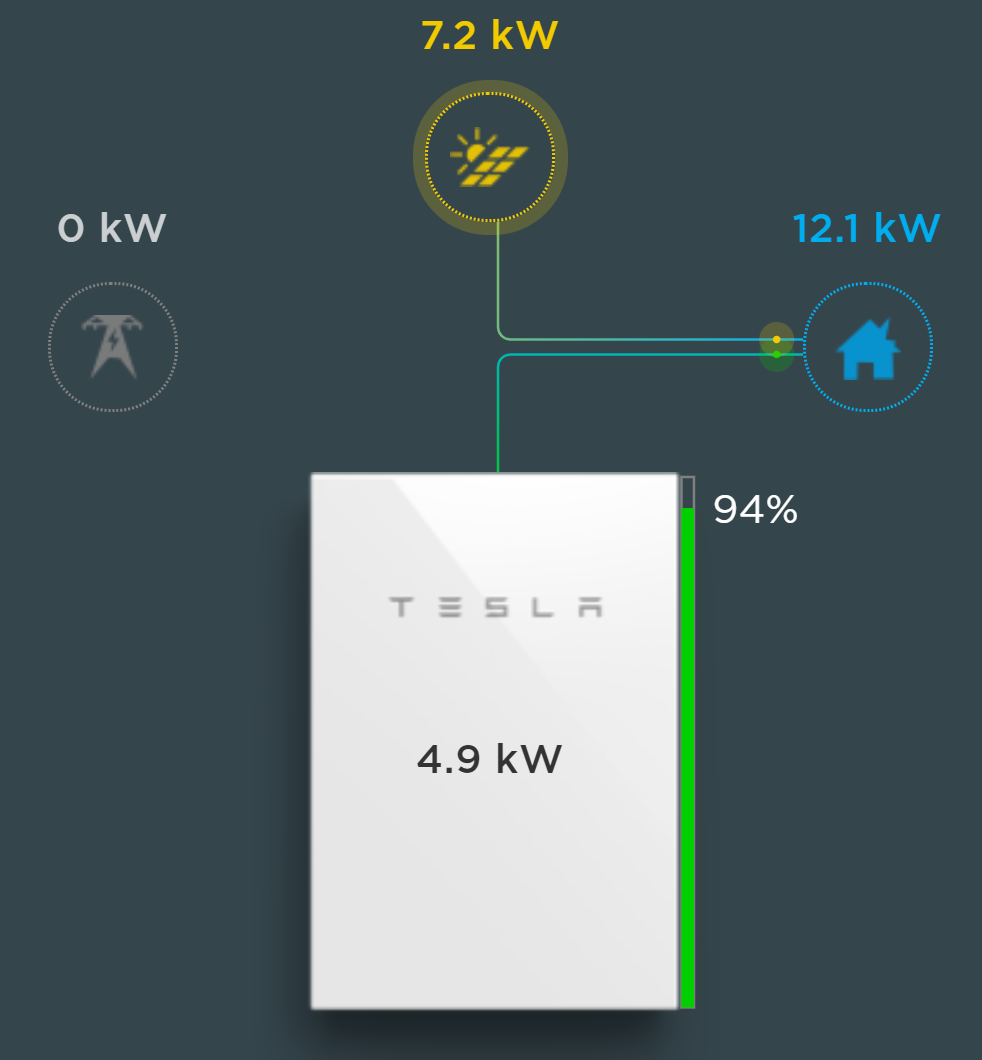 Here we are using solar and the battery to power the house. 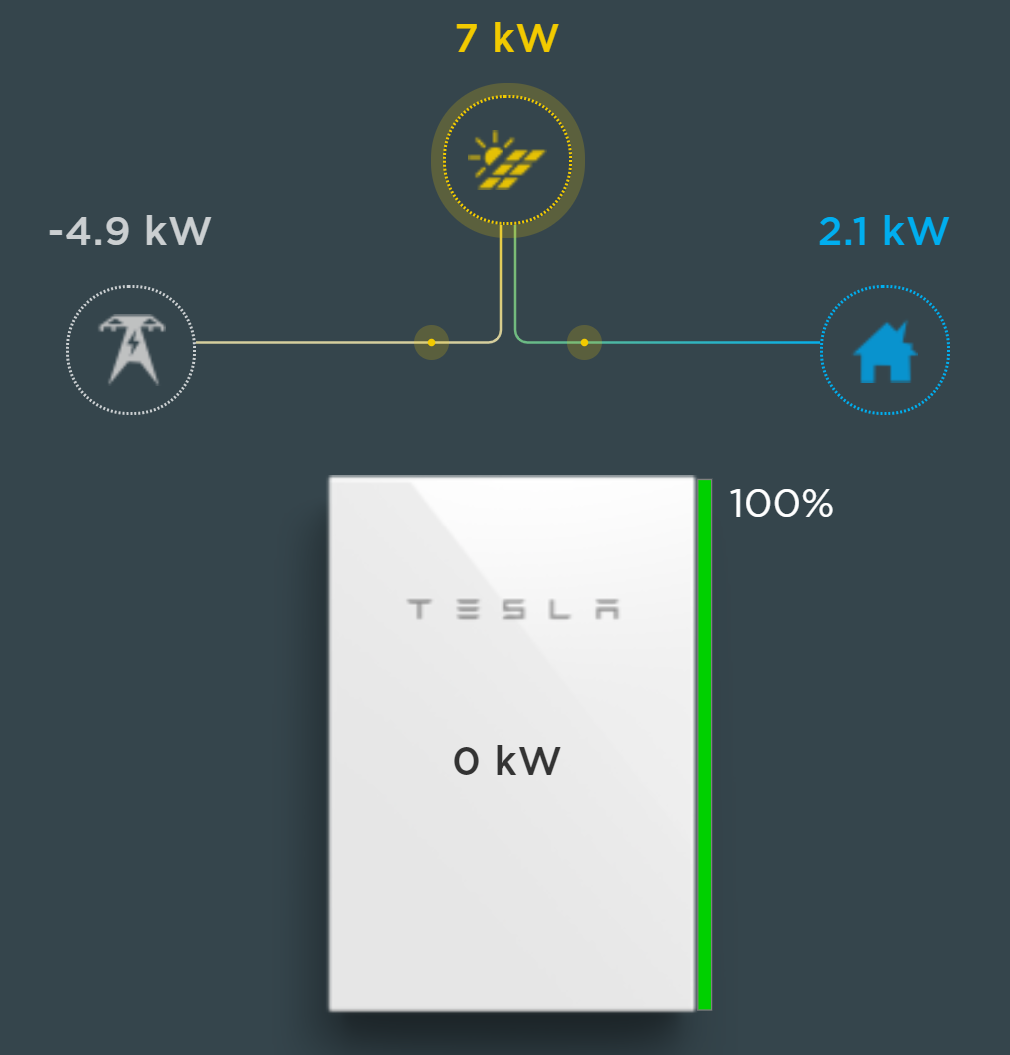 Here's the ideal: generating so much power that much of it is feeding back to the grid. 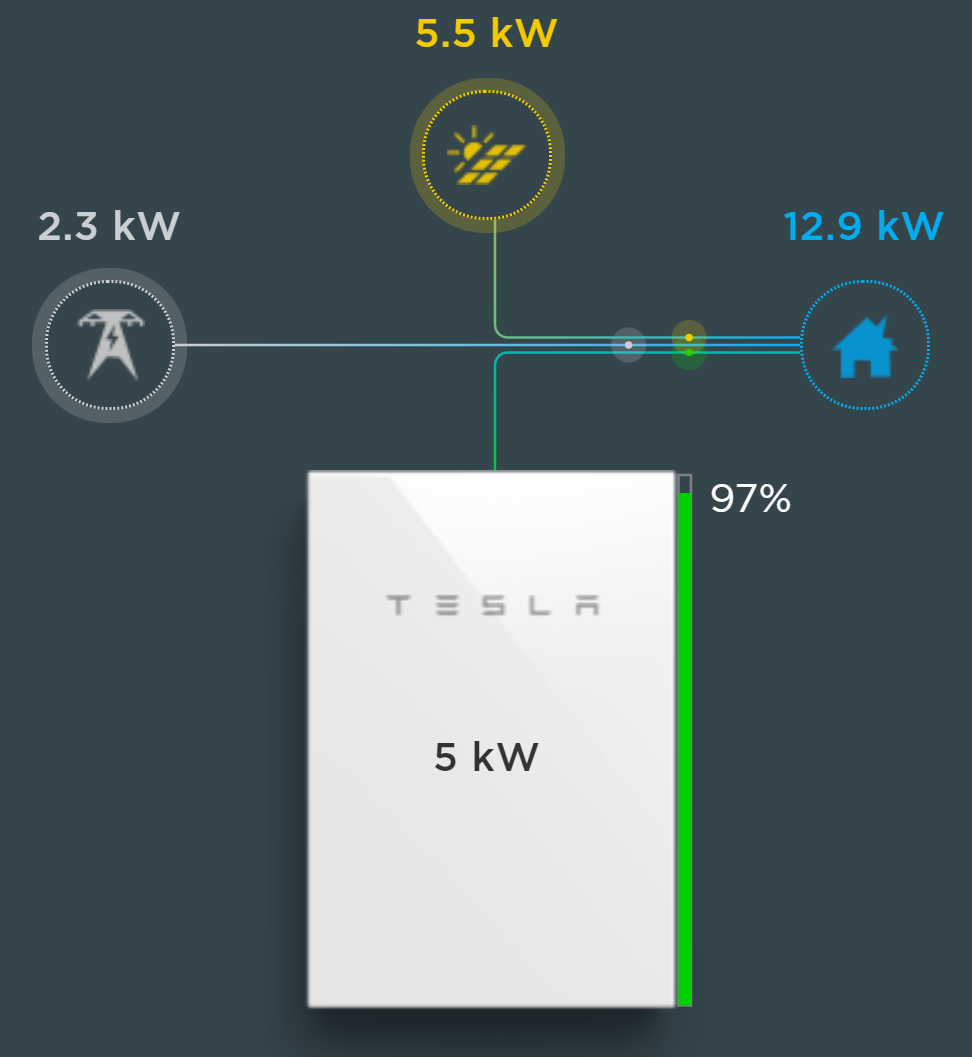 Here we are sucking power from all three sources.

Also revealing is the overall draw pattern on a particularly hot day: 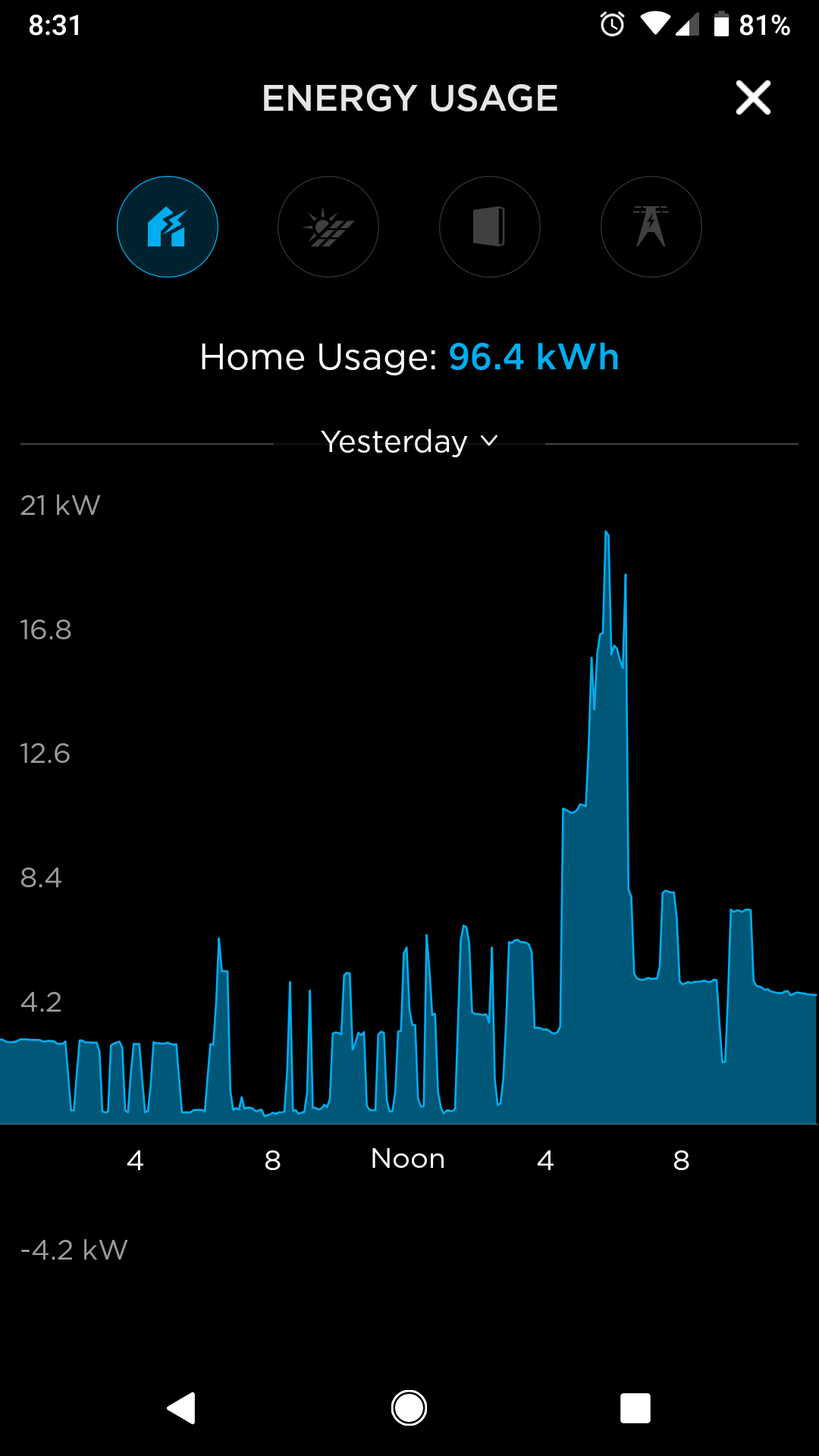 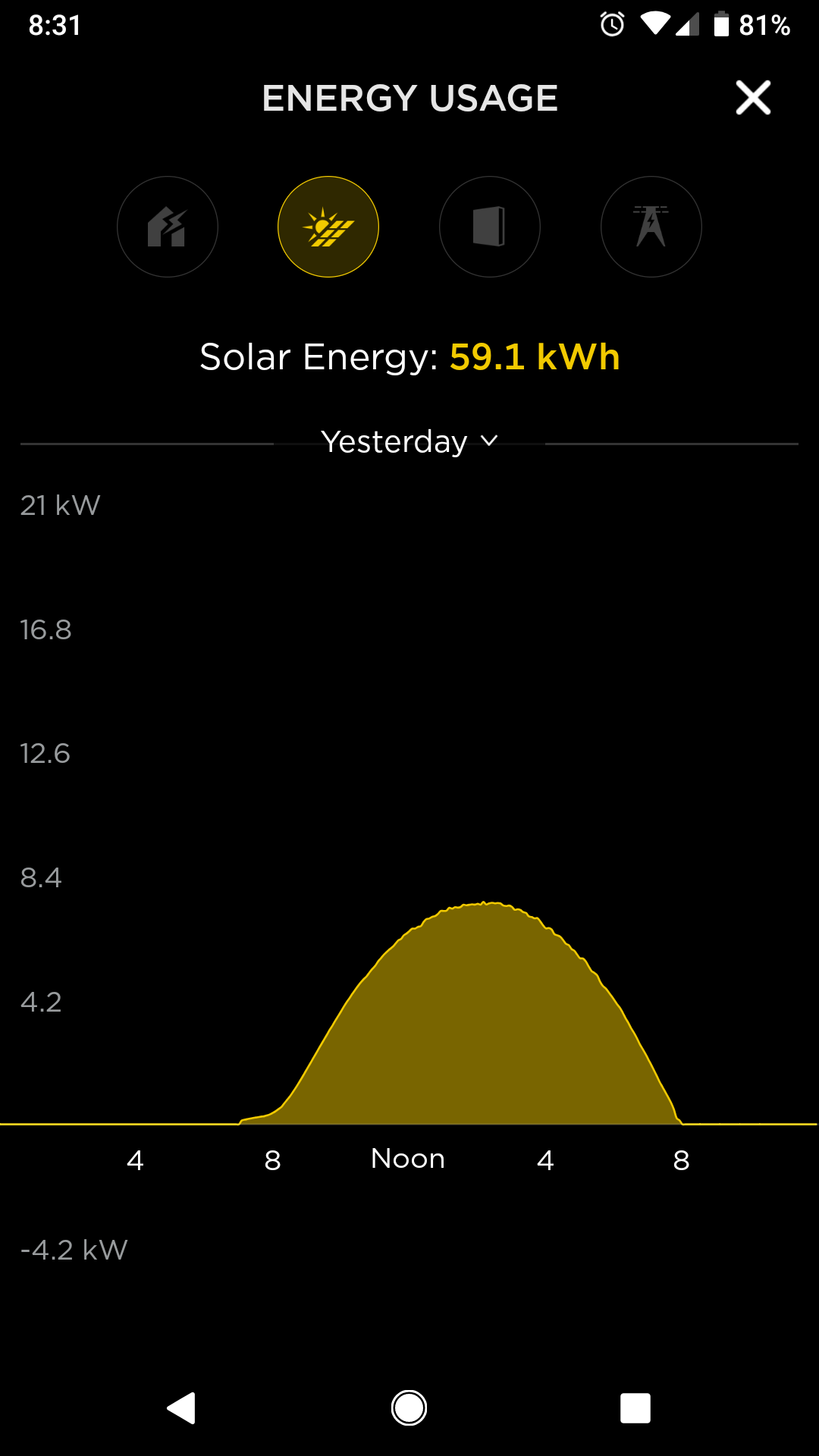 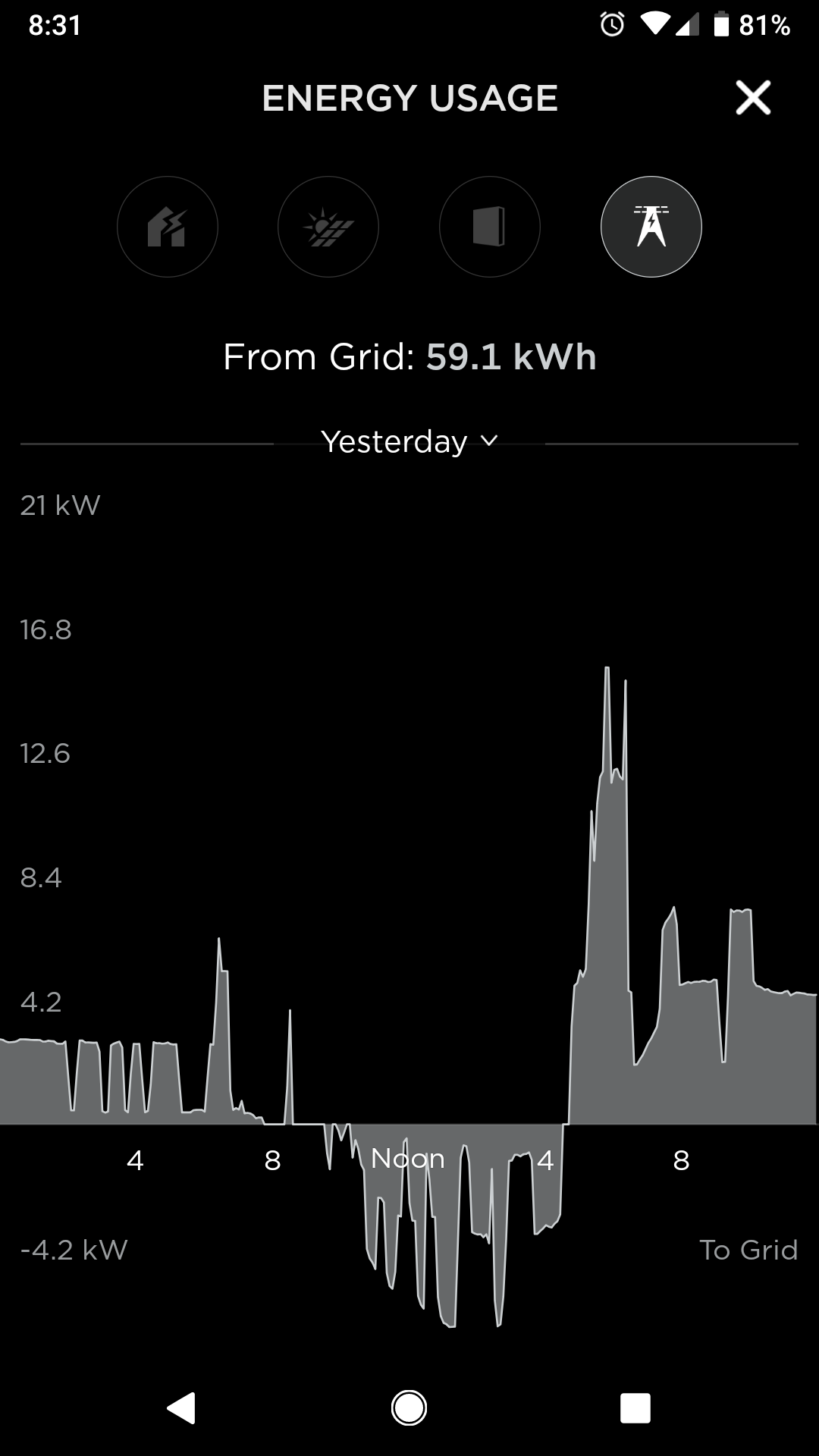 There are all kinds of things you learn about this data:

We live in the future. Residential storage was not even practical a few years ago, and solar ROI used to take 20 years.