Miller Hall, and the changes at AU

My friend Gretchen, who was three years behind me in radio/TV at Ashland University, and is now a prof there, posted this photo taken earlier today... 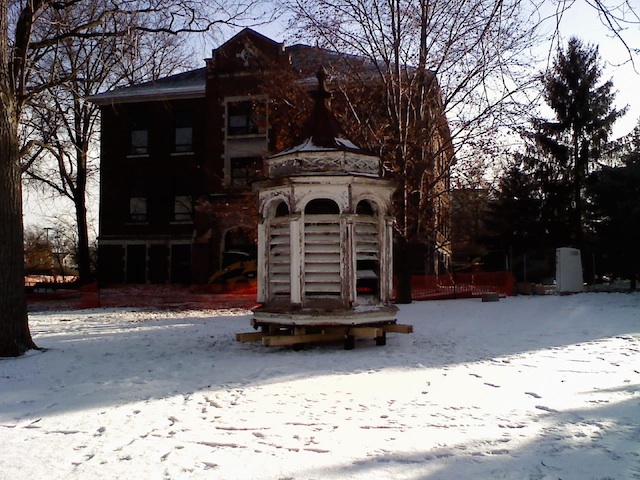 Miller Hall was old. The thread on Facebook when she uploaded the pic seemed to indicate that most people we know had "Exploring the Bible," a required religion course, in there. I seem to recall there were some business classes there as well. The building was old and drafty, but there was a certain quaintness about it. Now they've decided that it's too expensive to maintain, and it's coming down. When kids come back after the new year, apparently it will be gone.

I squeezed in some radio shifts before I moved, and as I mentioned, the school has changed so much since I graduated in '95. The building boom was pretty ridiculous after that, starting with the student center. It's all very modern, and I suppose that's cool, but I don't think they did a good job really giving it a classic feel. Even the older buildings left, like Jacobs Hall, where I lived one year, were made on the cheap and were uninteresting. It's not like John Carroll University near Cleveland, where every new building is a beautiful piece of architecture that looks both timeless and classic.

As a side note about old buildings, there aren't very many out here.