I saw my last of three Hamilton performances last night during its run here in Orlando. That makes for seven total, one on Broadway, the three others here in 2019. I absolutely love that show.

At a higher level, post-pandemic, I'm just anxious to see as many shows as I can. The Dr. Phillips Center is my happy place. It feels more familiar to me even than the theme parks. I've been there for stuff about 70 times now. Art on the stage is something that I find deeply emotional compared to other things. The last year in particular it has felt so essential to see live performances. I feel alive to see it live.

The fun thing about this show though is that you see something new every single time. Part of that is the density of the material, but it's also because different cast members bring different things to the performance. It's never the same twice. Some actors are better than others, but they're working with something that's pretty great in a fundamental way.

This time I also got to see it in three very different ways. The first time I went with Diana in our usual subscription seats, which I think are something like row U in the orchestra. Most of the time we trade up to better seats when they're available, but for whatever reason, we didn't this time. The second time I went with Simon, and we were in the third row on the aisle, stage left. Expensive, but worth it to see how intense the actors are. Last night, all three of us saw it from the second row of the mezzanine, which offers a completely different perspective that allows you to better appreciate the lighting and the choreography.

Given my recent obsession with lighting, and the technology we didn't have in my college days, I appreciated more than ever how this show runs, what fixtures they're using and how they likely set it up and align everything after load-in. But even more than that, I appreciate the choices made at various points in the show. The lighting is dynamic but serves the story and action on stage. Lovely as the set is, it's really just a catwalk with a lot of chairs, tables and boxes coming on and off the stage, so the lighting compliments the action. The fixtures they use are crazy expensive, like $8k to $12k each. The lighting design won a Tony for Howell Binkley, who sadly died of lung cancer a couple of years ago. He won for Come From Away (more chairs!) and Ain't Too Proud as well, among others.

There have been some subtle changes in choreography and blocking over the years, compared to the first time we saw it in 2018 on Broadway. The movie on Disney+ reinforces that. I don't think that's necessarily bad though. And the changes around Jefferson's interactions with Sally and the other slaves at the top of act 2 is different (though I never understood the ensemble to be slaves, it does make sense). We noticed that the choreography in this otherwise great company seemed a little sloppy, or at least not tight, especially during "Yorktown." But that's just picking. I appreciate how hard this show has to be night after night. It's three hours with a 20 minute break in the middle.

One of the reasons I wanted to see it a few times is also that I don't know when or even if I'll ever see it again. That's one of the things about live theater... it is completely ephemeral. Even Phantom is finally coming to an end on Broadway. Hamilton has three tours doing long runs, which appears to be too much, as they plan to slim down to one when these run out. They're selling most of the seats over the almost-four week run (with one reschedule due to Hurricane Nicole, but there were a lot of seats going cheap. I imagine the demand has softened because most people who wanted to see it have already.

And I learned this time around that the hand claps in "Wait For It" are indeed programmed. 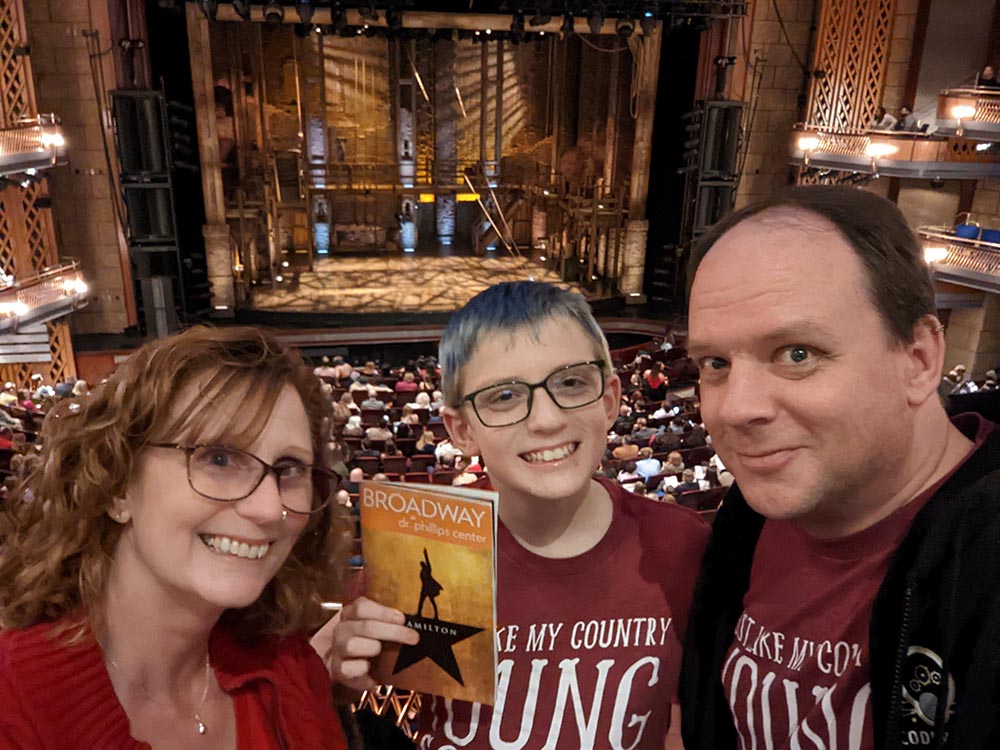