Way back in 2007, I bought an Apple Airport Extreme router, after years of having some Linksys object that had been made forever. I bought it mostly because my laptop used the newer and faster wifi standard (if you can imagine a time when only your laptop used wifi), and the switch in the old Linksys was 10/100. In 2009 I bought an Airport Express to extend the network with a wired connection, because it was easier than running cables around our Issaquah apartment to my home-brewed media PC.

That combination worked for me until 2014, if you could believe that. Seven years with a consumer electronics device. That was the summer that a lightning hit damaged that router, not allowing the WAN port to go above 10 mbit. Even that year, the cable company was doing 30, so not even a wired connection could use the full bandwidth from the cable company. I still don't understand why the cable modem worked OK. That router had a great run, so I replaced it with another Airport Extreme. At $194, it seemed too expensive, but one of the things that we were kind of bound to was the idea that you could plug in a USB hard drive to it so our Macs could backup to it, and it all "just worked." It was worth it to pay the premium.

Less than three years later, last January, to my surprise, that router just died. It was already failing to recognize the hard drive for weeks, but then it just didn't do anything. It was warm, but it wasn't routing. By that time I realized it was just as easy to use my desktop as the Time Machine backup target on the network, since it's generally turned on most of the time, so the backup need was no longer an issue. I couldn't justify shelling out another $200, so I looked at other options.

The other option was a TP-Link AC1750, which was getting generally decent reviews, one magazine or web site calling it the "router for the rest of us" or something. At $97 with tax, it wasn't the cheapest option, but with positive reviews it seemed good enough for me. And so it was. The coverage was weak in our bedroom, and non-existent in the garage, but it was otherwise solid. Until it wasn't.

For reasons I can't explain, it has required reboots every week or so for the last few months. Lately, it's been every few days. This week it was four times. They're kind of dumb little boxes, so when they don't work, what do you do? I wanted to not replace it, and even knowing in the new place that it would never cover the entire house, I figured I'd supplement with a $15 extender/access point that I already had and used for a bit (until I realized it was causing co-channel interference). With a few wired ethernet points around the new house, it would be easy enough. But today I had my fill, and ordered a mesh router, knowing it would definitely work better.

I ordered the Amplifi HD, which is made by Ubiquiti, a company that makes all kinds of commercial network gear. It was $334 with tax, which is absolutely cringe worthy for a device that doesn't do anything interesting or fun, but it includes two access points along with the router. The pricing on these systems is wildly different, with Google's system being a little cheaper, but Linksys and Netgear's costing more. The TP-Link system is less, but you know, not impressed with the router I had. (Aside: Their wifi smarthome outlets are silly simple and great.) The thing that sold me on the Amplifi was that the radios are higher powered, the reviews are almost universally good, and Hanselman actually mapped signal strength in his home. If nerds like it, it's worth looking at.

These days, we have 20 or more devices on the network at a time. The count is high because we have five Echo Dots and a growing number of switches, plus the usual phones, laptops and tablets. And a car. This router is neat because you can see in real time what's using bandwidth, and which access point they're on. Plus it has a glowy bottom and a little touch screen to tell you shit that doesn't matter in your life, so you know it's good. Seriously though, walking around the house with the excellent WiFi Analyser app, the coverage is amazing. "Full bars" everywhere, including the garage. It's really impressive how robust the connectivity is, to the extent that you don't realize how inferior it was before. I'm doing speedtest.net from my laptop at 170Mbps, which is the same rate I get on the wired desktop connection.

Yeah, routers are like the most uninteresting things ever to buy, and I'm disappointed at how many I've bought in the last few years, compared to the seven years prior, but this is a pretty solid tool. The real trick will be to see it in action in the McMansion, but I'm confident it will be awesome there, too. 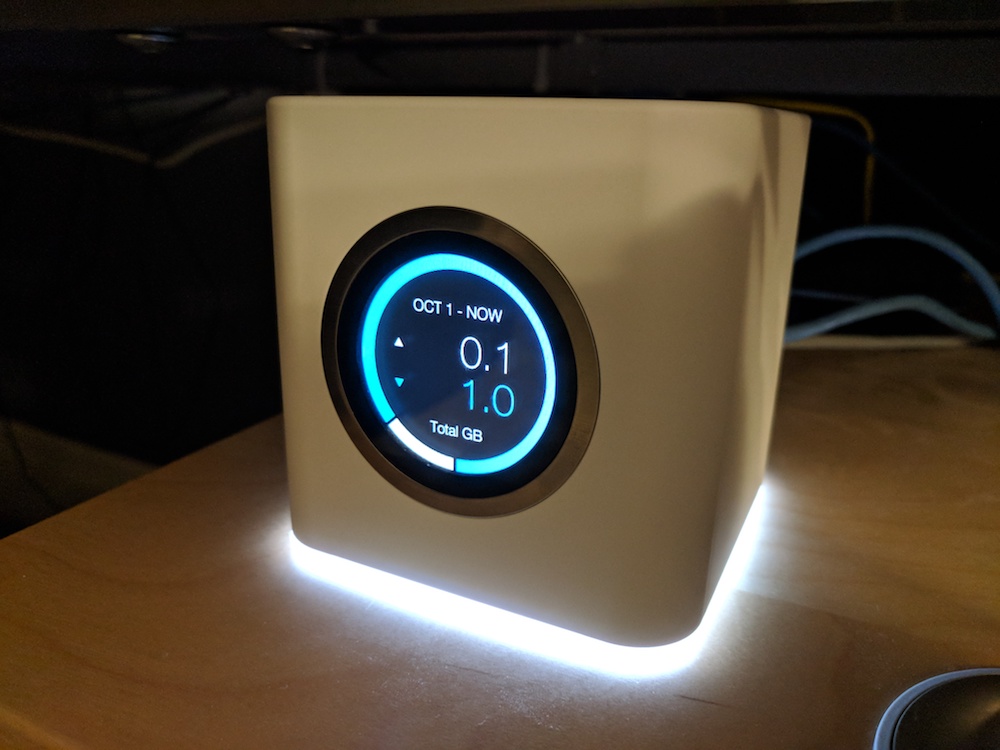