My love for Indian food

I've always been a picky eater, which I now understand might have been at least partly the autism, but it doesn't mean that I haven't made progress toward dietary changes. I stopped eating red meat around 2005 because my cholesterol was super high and I was a fast food burger addict. Around the same time, I started to try some soy/vegetable chicken substitutes, and to this day I'm OK with those sometimes. As Chipotle became more popular, I realized that a burrito without beans was pretty good. Eventually I fell in love with Indian food, but it was a long haul getting there.

My sophomore year of college, I was a resident assistant, and one of my fellow RA's in the building was Ajay, a guy from New Delhi. I don't remember exactly how he landed at Ashland University in Ohio, but I found him fascinating, and I realized that I knew so little about India. At some point, he decided to make some kind of curry in the hall director's apartment in our building. This was the same hall director that soured me on religion because he insisted Ajay was going to hell because he wasn't Christian, but that's an old story. All I could tell you is that the smell of that curry was magical, and unlike anything I had ever smelled before. It was a kind of richness that I still associate with the richness of color used in Indian culture.

Oddly enough, I wouldn't even think about Indian food for many years after that. At some point when Stephanie was in grad school, she wanted to meet some friends at an Indian place on the east side of Cleveland called Saffron Patch. I wasn't really interested in going and it was totally out of my comfort zone, but I went along. The smell in the restaurant was immediately familiar, and I had some kind of chicken dish, with some reluctance. I remember enjoying it, but then I largely forgot about it.

It wasn't until Diana and I made one of our early trips to Walt Disney World, I think in 2009 while she was pregnant, that I started to engage again. I had a chicken yellow curry dish at Raglan Road in Downtown Disney, and it just blew my mind. At the same time, Indian food was regularly on the menu in the cafes at Microsoft in Redmond, so I was regularly exposed to all of that flavor. I was hooked.

When we moved to Orlando, Diana was able to get the "cluck cluck curry" recipe from Raglan Road, and she's made it many times. Indian lunch buffets became a weekly thing when I was working at SeaWorld corporate, and it was never hard to talk someone into coming along. I also went solo. A lot. When I worked downtown, there were a couple of places I could go. By this time, I also started to appreciate the differences between Thai curry (coconut milk) and the Indian stuff (way more spices and thicker sauces from tomato, yogurt, etc.), and while I'm a fan of both, the Indian varieties are always far richer and more delicious. And they don't screw around with marinating the chicken either, so it's super good.

I was off today, and Diana and I took the opportunity to go to a place, coincidentally, called Saffron here in Orlando. I used to go there quite a bit when I worked at SeaWorld, but with the pandemic and all, I hadn't been there in years. I like it because they're not afraid of spice, and you can tell them "Indian spicy" and they will deliver. Easily one of the best meals I've had in a long time.

There's a new place that opened a few months ago that's closer to us, but it's a little pricey for dinner, so I'll have to try lunch. Meanwhile, I'm going to try and make my own from a chicken tikka masala recipe that I found. 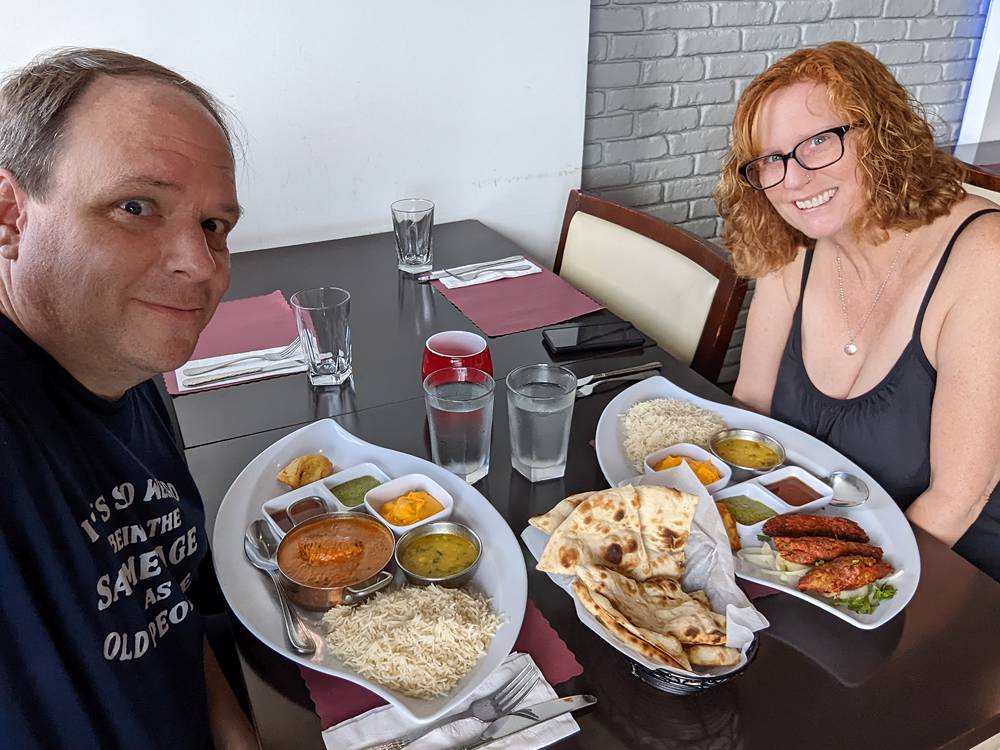