I visited my... sixteenth-ish +/-2... IAAPA Expo today. For the uninitiated, this is the International Association of Amusement Parks and Attractions big annual trade show, which has been in Orlando now for a decade or so. I went to my first show in 2000, when it was in Atlanta and CoasterBuzz was not even a year old. I went completely nuts, lined up a ton of interviews, wrote features... it was epic. I did the same thing the next year, which also felt necessarily therapeutic after 9/11. And consider that I was only a few years removed from college graduation, journalism degree in hand and the Internet barely mainstream and without ubiquitous mobile access. Times were different then. I was different. Since moving to Orlando, I've dropped in every year for at least a few hours, not so much to cover the show, but to meet up with folks from around the industry that I've gotten to know over the years. Today's visit involved an insane crowd, and I kept running into people nonstop that I had not seen or talked to, in some cases for more than a decade. My head is filled with feelings and thoughts about the experience. I have to figure out what I'll write about.

To start with though, I can't help but notice that while I worked really hard on finally adding features to my forum app, my interest in the hobby is awfully far from what it used to be. And that's certainly not unreasonable. Since I started it, I've been divorced, married, had a child, moved 6,000 miles, had an embarrassing number of jobs, and dabbled in a great many other hobbies. As Indian Jones once said, "It's not the years, honey, it's the mileage." Because of that, the number of contacts that I still actively maintain isn't what it used to be, and I'm sometimes caught off guard not paying attention. Somehow I missed, for example, that SeaWorld San Diego was building a new coaster.

There's also the fact that for so many years I was an outsider, but looking in and playing the relationship game so I had access to all the things. Even now, I could probably take advantage of relationships to get tickets for parks. But my network is smaller, largely by professional attrition, but also lack of upkeep. Then I did my year at SeaWorld corporate, and it was, not so much eye opening, but exactly what I expected it to be looking in from the outside, which is to say it's not exactly a business that's great for career opportunities. Ten times that for software and tech people like me.

The other thing though is that back in 2000, I had all of the first-mover advantages. No one had really built a community around industry news, and what was essentially a directory to the bazillion fan sites that every kid with a college Internet account was building at the time. Those fan sites looked awful (not that mine was great), but they were passion projects and valuable. Around the same time, two or three tried to make them sprawling businesses, and of course they're all long defunct. I was able to pay my mortgage through the recession with the sites, but that was, at best, a lifestyle business on top of a passion project. Then we did the podcast before podcasts were cool (and everyone in Covid decided to start one). So much change.

The weird thing now is that there are all these kids with Facebook pages and YouTube channels and they all make the same stuff, but few really get the business end of it all. Worse yet, they've built their content on top of platforms that will, one day, go away. They don't own anything. Like, even today, a bunch of people posted the same photos on Twitter from the show, but what do you win for Twitter likes? I posted on Twitter, "Photos on the site," and saw a healthy traffic spike of about 5k extra views so far that had ads on them. Again, if these cats are doing it for the "engagement," and not the passion, that's fine I guess, but I'm so not into that world. That's social media... it's not in service to the audience, it's in service to popularity and engagement.

That all sounds like "old man angry at cloud," I'm sure, but it's not that. I've said before how amazing it is that people like Mark Rober or Smarter Everyday have risen above the noise because of platforms. I love that. But me the classically trained media guy and writer, feels like all the things out there are ephemeral and trivial. A marketing director I talked to today expressed the same frustration. There used to be value in working with passionate fan media, but when they started calling themselves "influencer," nope, the attractions don't need that to win. (Sidebar: I'm told by cruise industry knowledgeable people that they experience similar phenomena.) Maybe they never did.

But it was conversations like that, and many others, that I deeply value. One guy I talked to today I first met at that first show in 2000, and he's a co-owner of a company that is radically innovating with amazing products. They're in a certain niche, but they're owning it. I love stories like that. I miss telling stories like that. I'm just not sure I have the time to ever commit to stuff like that again.

So it was a good time, and I wasn't even sure if I would commit to going when I went to bed last night. I'm glad I did. It was so great to see all of the people. 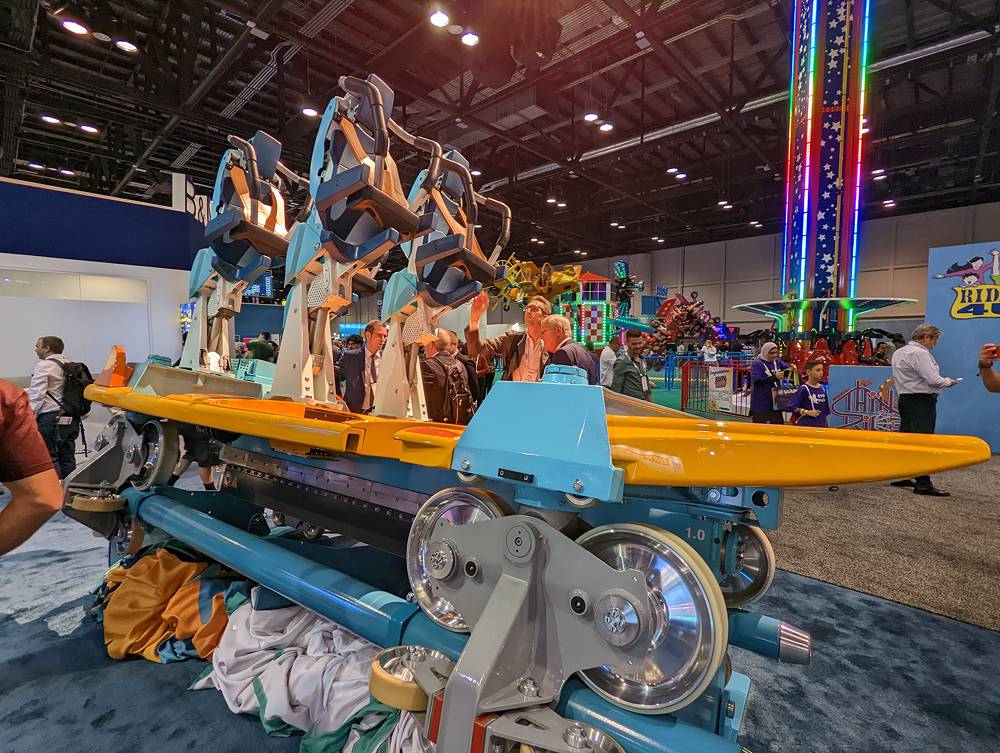