Very early yesterday morning, 4:20 a.m., actually, I got out of bed, showered, and went to pick up my best friend and her roommate to drive out to Canaveral and attempt to see the Orion launch aboard a big ass Delta IV Heavy rocket.

I had a really great viewing location in mind that's a little off the grid if you're not aware of it, and when we got there at 6:30, indeed, there were only about a dozen cars there. We were treated with an unobstructed view of the broad side of the rocket, better than I expected.

You know how things went, starting with that damn boat that was in range and causing a delay. Despite being 0 for 2 now on launch observation, I really enjoyed the sunrise and had lots of great conversation with my friends. The sheer volume of people lined up on 528, and the photos from surrounding areas, was insanely impressive. People are obviously excited about the space program again.

I couldn't bring myself to go back this morning, and of course I instantly regretted it as I watched the launch on TV this morning. We had a break in the clouds (we're directly west of the cape) and got to see it as it breached the upper cloud deck. We even saw where its vapor trail ended.

When I saw the Space Shuttle Atlantis back in February, it was kind of a life-changing experience. I know that sounds a little dramatic, but it's true. I was obsessed with the space program when I was a kid, and I kind of lost that sense of wonder with age. I think combined with having a child of my own, I've started to get that back.

Space travel is important for a lot of the reasons that Kennedy suggested in his speech decades ago. In our time, it feels like the world is selfish, superficial and filled with bad news, even though objectively one could argue that life is a lot better than it used to be. Space exploration makes us feel like there's something bigger and more important going on. I feel like we need that. My hope is that the Orion program is a going to be a part of that. 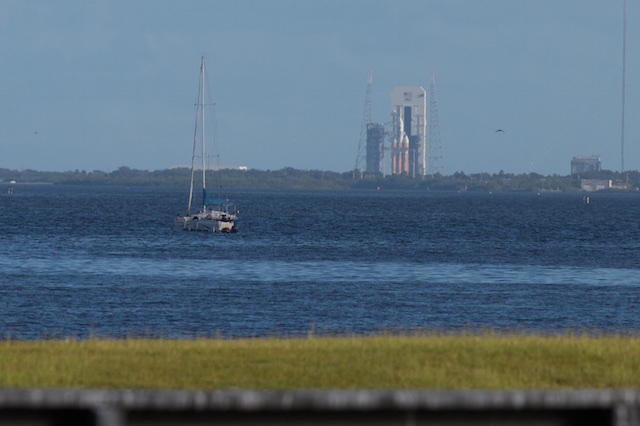