There are two copies of the house we're building going up in the neighborhood finally, so we're getting our first chance to see the layout in for-real-vision. I spotted it last week on a drive-by, and we did a quick walk through. Since then, they put up the drywall, so now we have a much better feel for how it will actually look. They started pushing dirt (sand?) around in our actual lot.

For the most part, it's about what I expected. The "flex" space downstairs, which could be a dining room, but Diana will use as her sewing studio, seems smaller. The master bedroom and loft upstairs seem bigger than I imagined. Overall the house feels huge, and I hope that I'm not second guessing myself in terms of what we decided to go with. I think the thing that helps with perspective is that the 3,000-foot+ model has space that's clearly useless, and we have almost 400 less. Aside from a bedroom, we more or less can figure out what we'll do with the space.

We'll have the fourth house down, and another few houses and it's a block around a retention pond. The house faces west, and our neighbor to the south has a single-story. That's great for the sunny side of the house, and we'll be able to see fireworks from Magic Kingdom from the second floor, if we so choose. The fourth bedroom, which I think will be the guest room, faces the north side, and neighbor windows, so that would be suboptimal if we were using that room regularly.

We're already thinking a lot about paint and a few of the things that we need to do. For example, we have the kitchen wired for pendant lights, but we need to put those in ourselves. We'll also do a backsplash. We are waiting to see where the warm spots are before we install any ceiling fans, though the bedrooms are all wired for them.

I very much look forward to seeing the house go up, and moving in, but it still causes anxiety just because of the bad experience around the previous house in terms of selling. That doesn't really make sense, because we're not planning on moving again for a very long time. The developer (and by extension the builders) seem to have a pretty good plan for the area, and it sounds like there are a lot of plans for retail, office, schools and even a hospital. As long as the economy doesn't fall apart again, it should remain a good area. I'm still just a little gun shy about buying.

It's interesting to see the differences in construction for a Florida house. The most obvious is that the entire first floor is masonry instead of wood framing, in part because of termites and carpenter ants, and it probably helps keep out the giant roaches too. The furnaces are obviously just electric because they're rarely used for heat, and they're often tucked away on the second floor in the middle. And of course there are little things, like the way the roof is attached to the structure to reinforce it for high winds. No basements, of course.

This is fortunately not one of those developments with the giant walls and gates and such. I don't know what the fascination is with gates in Florida. I've seen it suggested that they're not any more or less prone to burglary. The developer seems OK with higher density, and has custom builders doing the lots along the big lakes. The HOA takes care of the lawn and pest control for a reasonable cost. So far the existing houses are on an appreciation tear, with around 200 built out of something like a thousand lots. There's a spot for an elementary school, and the district is apparently looking at a high school in the next community. There's a whole lot of potential growth in the area.

So around the new year, the house will be nearly done, and as soon as we can close on the loan, we'll drop some roots. Even if it is a little scary, it's nice to think about not moving after what will be five moves in just over four years! 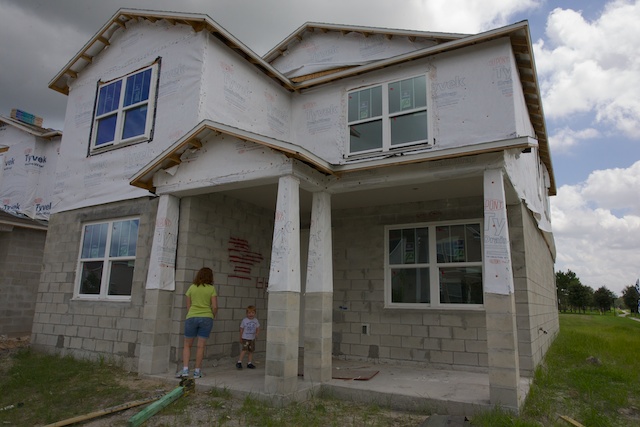