There are days and months for awareness about almost everything. Autism gets its day/month right now, and it's actually cool to see how many people I'm still in touch with via Facebook (from high school, college and various jobs) that have also had challenges with a child on the spectrum.

We got the official ASD diagnosis for Simon a little over a year ago. In retrospect, it's kind of funny to think that it was just a passing thing, and not the start of something. It was already clear that he had certain developmental issues, and this just tied it all together in a way that made it easier to get the right services and education for him. It has been an interesting year to say the least.

I don't really consider his "flavor" of ASD to be a disability. He has challenges around certain things, and behaviors that are difficult to manage, but to me these don't indicate some inability to exist in the world, but rather a need to adapt. In the short term, some of it is a need for the people teaching him to adapt, and he's getting that.

What do we specifically struggle with? His fine motor skills, mostly writing, are a little behind, but the kid can use a computer mouse like he was born with it. Simon also hits a lot, not because he's trying to be violent, but because his sensory processing delays cause his brain to overcompensate for input in order to develop the responses to the input. I've been hit in the balls more times than I can count. Lately he also struggles with adapting outside of his routine, which is surprising given how well he travels. If he has a substitute teacher, or Diana isn't home when he gets off of the bus, there are issues. He also has a visceral reaction to not being able to sit in the front or first car of amusement rides sometimes, resulting in total meltdown, but that could be a coaster enthusiast gene.

You know what's crazy though? The more I learn about autism, the more I see that I'm likely on the spectrum as well. Simon teaches me a lot about the way I was as a child, and even certain characteristics I have as an adult. Sometimes my disregard for convention isn't disrespect for authority, I'm just wired to reject things that seem illogical or pointless to me. I always knew that having a child would likely cause you to learn a lot about yourself, but I didn't expect it would be something like this.

There is a longer term thing that I hope autism awareness will do for me. I used to be very judgmental about other parents, and while the behavior of spoiled brats is still a lot different from a kid struggling to reconcile his world with that of the neurotypical, the truth is that I don't know what's going on there. While I see older generations, and even some people in my own, closing their minds to people who are different as they get older, I hope that this understanding continues to push me in the other direction.

As I said when I posted this photo online, Simon brings a lot of love into our lives. He's one charming kid. We're lucky to have him, and I think he'll grow up to be an incredible human being. 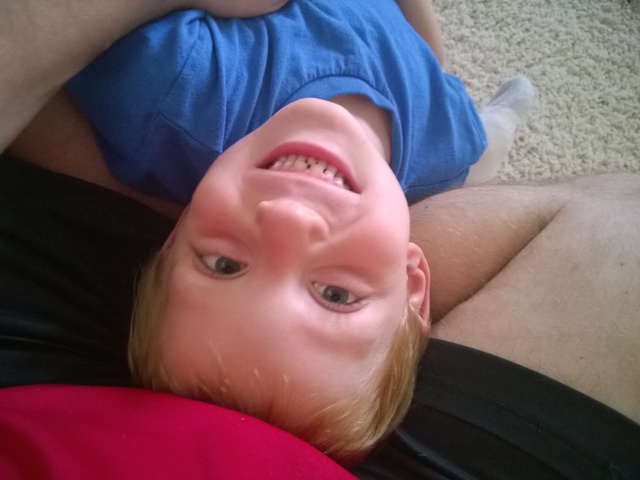 One of my friend's child also has autism. I really don't like way community treat them. Just last week their PR got denied due to child has autism and the school asked them to move the kid to different school. I think we should change the way community think about this. I'm not saying that I know what my friend face but it's not my friend or kid's fault that things happens this way.

Hi Jeff,
It's Jeremy bka 2Hostyl from CBuzz. Got here through a long facebook chain, but reading this, it's almost like you were writing for me regarding my oldest Zachary. So smart, so charming, then his SPD kicks in and you'd think the whole world collapsed.

It's also funny you mentioned learning about yourself. When we read and talk about the spectrum, there are many times that my wife will note "Hey you do that too." My first reaction is usually, "No, I dont", or "That's different", though in reality, I've just learned how to cope and he hasn't yet.

Anyway,just wanted to drop a line. Hope all is well with you and yours. Cheers.