One of the best parental moments yet

I've said before, while over my brother-in-law's house, how I really look forward to the time when Simon is pushed to the limit and falls asleep somewhere, then we have to carry his sleepy butt to the car, then up to bed. I've seen countless parents do it, but never thought of it in the context of how great that has to feel.

I was taking care of Simon today, and he has been a little needy. He's been constipated and I think not feeling well in general from time to time. A little before 11, he started to get super clingy, but I figured he'd be OK, have a snack or some lunch, then take his nap at 11:30. The landscapers were outside with their mowers and blowers, and you could see in his eyes that he was about ready to sleep.

I picked him up, and he just dropped his head on my shoulder. He made one of his dramatic yawns, and started go limp in my arms. After a minute, I wondered if he was going to lift his head up. After two minutes, I thought, I gotta sit, he's too heavy to hold like this. Besides, he'll get right up as soon as I sit. That's his thing... he has never wanted to just be picked up, he wants to be picked up with you standing.

But as I sat down on the couch, he barely even flinched. I couldn't see his face, but I could hear the steady, relaxed breathing. He actually fell asleep in my arms.

We sat there for about fifteen minutes, and even though I was not comfortable, it was as if the outside world, and all of its issues, did not exist. The fatigue was setting in though, so I got him upstairs to bed. He gave a little whimper, but slept for an hour and a half after that.

These kind of moments are incredibly infrequent, and simply won't exist when he gets older. He would fall asleep in my arms after late feedings when he was tiny, and also when he was sick, but it's rare. I remember one time, in his first week or two, he barfed all over me, so we stripped him to his diaper, tossed my shirt, and took a wonderful nap in the recliner. You can't bond with your child in a more basic way.

I'm grateful to get this time with him. I don't want to be the guy who he sees for two hours in the evening. It's hard to understand how this little person can bring so much love into your life. I look forward to having many adventures with him and Diana. 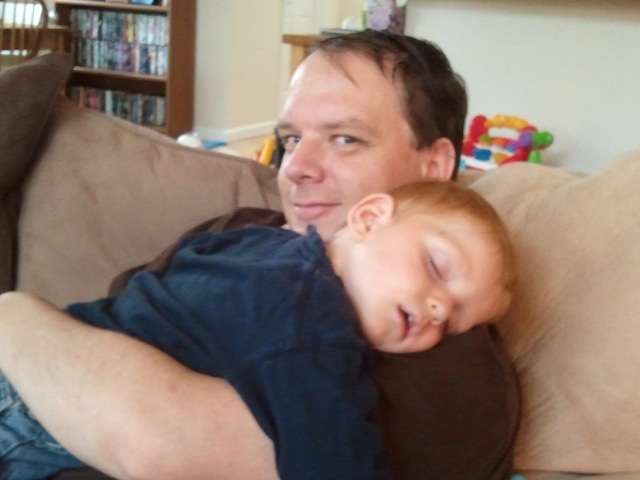