We did a round-trip from Orlando to Waynesville, NC to visit my in-laws for Thanksgiving. This was the first time we've road tripped on electrons. The executive summary is, it's really not any different than driving a gas powered car on road trips, save for having to be a little more specific about where you stop.

It's easy to over-think driving an EV, because virtually everything about it is quantifiable with comprooders and science and what not. All of the same principles around physics and efficiency apply in the same ways. The faster you go, the less efficient. Temperature and elevation change also affect range. The only thing particularly interesting about any of that is the recovery of energy when going down hill for long periods of time. It's crazy to see range go back up.

What's really different about driving an EV? The thing I most often tell people is that, for most of your driving, public charging doesn't even matter. How long does it take to charge? I honestly don't know, because I plug it in when I get home, and unplug it when I go in the morning. I never have to stop anywhere except where I'm going. That's 98% of what most people do to driving.

For the long distance trip, the biggest change is that you have to plan a little where you're going to stop. So remove for a minute the cost of the car, because that's a temporary problem in the world of EV's. Let's also disregard the fact that Tesla has subsidized the high-power charing infrastructure. The point is that the only "inconvenience" is having to stop where the chargers are (something far outweighed by never having to stop anywhere with typical daily use). Our stops probably averaged 20 to 30 minutes of necessary charging time, but eating or chatting with other drivers often extended that time. The same trip last year, in a gas car, took longer, probably because of a stop at a sit-down restaurant.

If anything surprised me, it's that I didn't actually mind taking my time at any stop. Some locations are more interesting than others, for sure. What they all have in common is the sense of community among drivers. People are excited to share stories of where they've gone, people they've met in different locations, and a lot of nerdy stuff. You also get people who are not owners that are very interested in the technology. Today we had police officers chatting with us in two locations (St. Augustine, and Kingsland, GA, the latter of which is literally behind a police station). Those discussions almost always start with the charging questions above.

The sense of community extends beyond the chargers. I noticed a lot of waves and light flashes. The owners are extremely diverse in age, culture and income. I have noticed a lot of retirees, and a lot of technology people (often immigrants), but it's a pretty wide range overall of ages and professions.

It was a fun driving trip. I think if you had a lot of time and could take it at a leisurely pace, a cross-country trip would be fantastic. 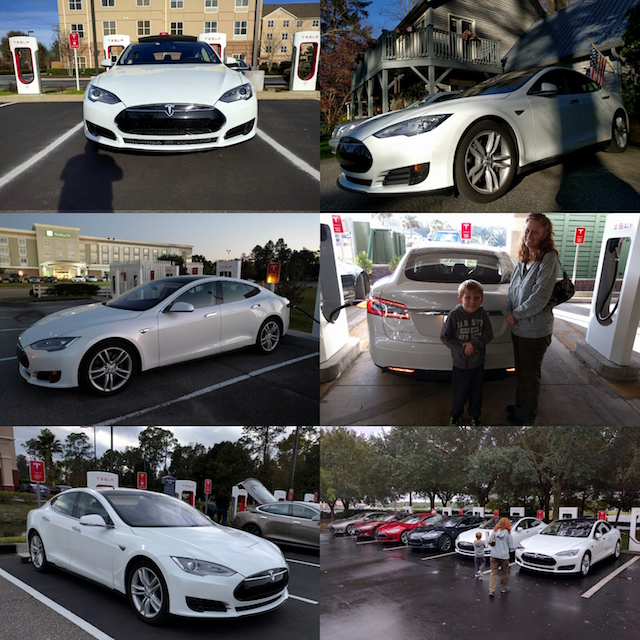