Diana is a member of the Orlando Modern Quilt Guild, and they organized a retreat up in Daytona Beach where they got a big old ballroom to hangout in and sew. Epic as this is (so many sewing machines!), it's not exactly my thing, but since there was a hotel on a beach involved, it only seemed right to invite me and Simon along for the ride. I was pretty sure that Daytona Beach was kind of a shithole (confirmed), but it seemed like a good chance to hangout with Simon in a way that doesn't involve three hours at Magic Kingdom.

He was super excited to go, to the extent that he "are where there yet"-ed us in a non-ironic or comical way several times in the relatively short drive. As soon as we unpacked the car and Diana went to setup her rig, we headed down to the pool. The lazy river was broken, which was the first of many ways that the hotel disappointed us, but the slide was functional, and he was super impressed. From there we headed down on to the beach to experience what was probably the most intense surf that he has seen. He was surprised by the rip current, so we spent a little time talking about ocean beach safety. The joy on his face though was something to behold. This is a kid who didn't even want to walk in the sand barefoot just a few years ago. I smile just thinking about how much fun he was having.

That night we hung out in the room watching Incredibles II, and I introduced him to the old game Flight Control, which I forgot about entirely, on his iPad. He expressed gratitude several times for bringing him on this trip, which is something of a developing skill for him. Living next to Disney World completely screws up your sense of normal, and empathy is hard enough for an ASD kid, so he doesn't generally recognize when people are kind to him. It wouldn't be the last time that weekend.

On Saturday morning, we headed out to the speedway to do the tour. There was some kind of minor race going on, so I knew they wouldn't take us out on the track itself, but it still seemed like a cool opportunity to go into the infield, walk around near the pits and go high up into the stands. We were a little early, so we walked around and got to talk about... stuff. Whatever came into his head, I tried to engage with him. We went up on the big foot bridge spanning the street, and talked about why the fences caged in the whole thing, what the suspension cables were for, how many people might walk on it, etc. We talked about how cars worked (gasoline is "stinky" and why aren't the cars electric?), why Toyota has their name all over stuff and what the solar panels out front do. He's curious about so many things.

We stopped briefly the day before at the Tesla Supercharger to top off a little (we didn't need to, but I wanted the "credit"), and I noticed that there was a Chuck E. Cheese there. Normally, I would consider this to be a horrible place to go, but Simon mentioned that he'd like to try some games in the hotel arcade, which I knew was coin-operated, and I never have cash on me, so this was a possible alternative. I got him to eat one partial piece of pizza, no small gesture, and from there we played $25 worth of redemption games. Where we bonded the most was Skee-Ball, proving that he's definitely my child. We played close to 50 games between the two of us, and the repetition seemed to give him some insight into the physics of the game, even though it was a cheap knock-off with non-wood balls.

As we prepared to drive back to the hotel, Simon said, "Daddy, I really love you when we have fun, thank you." Again, I'm not used to hearing him say stuff like this, and I can only take what he says at face value. He doesn't do sarcasm or try to invoke guilt, so this was a very matter-of-fact statement that he appreciated what we did.

That night, we took to the pool again, but it was too cold. He experienced dancing at Johnny Rockets, which he thought was hilarious. Later we watched Jurassic World: Fallen Kingdom, where the thing that upset him wasn't the people being eaten, but the fact that the dinosaurs all went free at the end. He cried hard on that. You just never know what's going to upset him. I only let him watch it because a friend let her son watch it, and he's all about dinosaurs.

As we packed up on Sunday morning, Simon was willing to help with the usual elevator and doors, his obsessions, and carry stuff when prompted. On the drive home, I felt like we had an experience that we really needed. I've been trying to be more patient with him and look for these pal around opportunities, because we both need something to balance out when I'm the disciplinarian or task runner. I also need the perspective that being Simon's dad, and being Simon, isn't a constant struggle. We have our challenges, but I want him to have a happy childhood as much as possible. I hope he's old enough now to remember weekends like this. 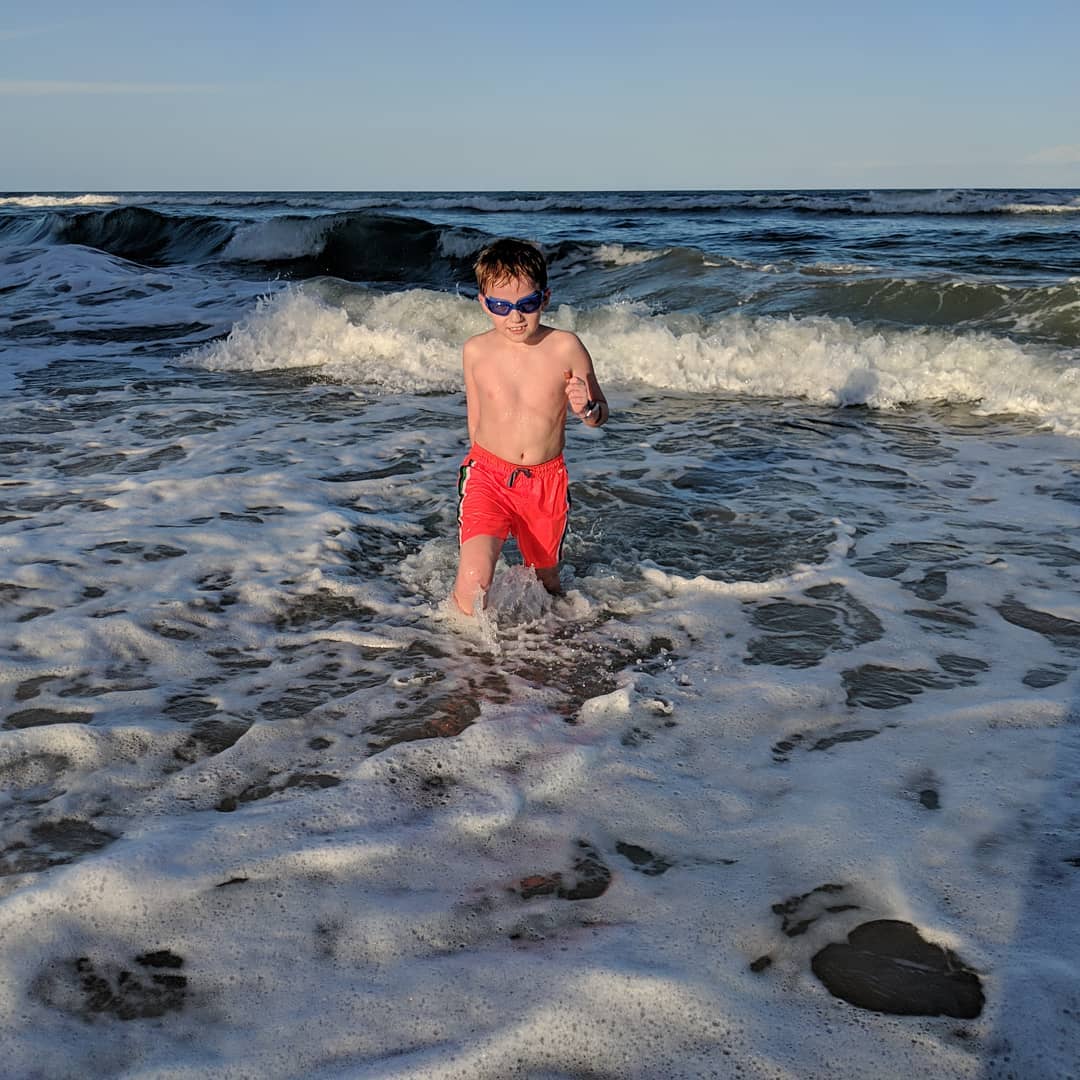