Following my strong desire to buy something, I decided to just jump in and buy a Google Pixel phone, the smaller one, just because I wanted something shiny. We also decided to drop AT&T give Project Fi, Google's proxy wireless carrier, a try.

First, the phone. It's shiny, it's metal, and it's pretty. Mine is also blue! I'm a big fan of colored phones, and I loved the red Nokia 920 I carried for years in part because it was red. I haven't had a metal phone since the original iPhone, which I replaced with the iPhone 3Gs in 2009. The metallic sheen is great, but of course I can't not put it in a case, so it's not as pretty as it could be. As I did with my last phone, I bought a clear case with rubbery edges to protect from falls, so you can still mostly see it. The upper third on the back is glass, so it's extra pretty. Surprisingly, I like the front having a white bezel, as it frames up the screen in an unexpectedly pleasant way. I'm grateful for having the headphone jack on top, where it belongs. And yes, headphone jack. (Suck it, Apple.)

The screen is 1080p, with a staggering 441 pixels per inch. That's higher than anything else I've ever had. Sure the iPhone and a number of other phones have lower density, but I doubt you can really tell the difference. The annoying thing is that the default color space is extra saturated to make that AMOLED screen pop, and it made known reds look bright orange. Fortunately, you can enable the developer options and force the sRGB color space which is far more normal.

The camera is fantastic, which was one of the reasons I wanted to upgrade. Mind you, it's only marginally better than my Nexus 5X from last year. It seems to do a slightly better job with night cityscapes, balancing the exposure, but it seems to be biased a little more toward slower shutter speeds in low light. I learned this the hard way at a wedding this weekend with the flash off and blurry people. I don't understand the mindset that thinks 1/10 of a second is OK instead of a noisier and higher ISO, and you can't change it in the default Android camera app. Outdoor is a little sharper than what I had last year, especially around the edges, and you can pull off shallow depth of field (electronically aided, I'm sure) with people a couple of feet from you. The other thing is the video stabilization, which is shockingly good. It can record 4k video (I'm not sure why you'd want that), and at 1080p, I'm guessing it has a lot of extra pixels to spare and pull off the stabilization.

Performance is great, which for some reason surprised me. I haven't had a most-current phone in a long time, as my last one was slightly eclipsed by faster CPU's. Everything is even more responsive, and with the great screen, it really shows off how far along Android has come in terms of UI, typography and animation elements. As was the case with the Nexus, it's the latest possible Android version, because there are no carriers or manufacturers that need to update their own fork of the OS. I don't think I would buy a non-Google Android phone because of this.

I'm upgrading from a Nexus 5X, one of the two phones Google put out about 14 months ago. That's a great phone, and currently a bargain at $300 (it was $420 when it was released). Is the Pixel really $350 better today? Absolutely not. I'll pay the premium because I can afford it and like shiny things, but this is the same complaint that I've had about iPhones. You can spend half as much and get a phone that's 80% as good. The cost is disappointing.

Quite by accident, the Pixel got me thinking about Google's Project Fi, the quasi-carrier they spun up that actually uses the best signal it can find between US Cellular, T-mobile, Sprint and wifi. The phones are sold unlocked, so you can use them on any carrier you like. Google will send you a SIM card and you're on your way with a super simple and excellent online experience to sign-up and transfer your number. The only catch is that you need a Pixel or Nexus phone. Fi works on a pre-paid basis, so you pay in advance, $20 for the first line, $15 for subsequent lines, plus $10 for every gig you want. If you go over, you're charged the difference, if you go under you're credited. Considering how little data we use, this is an enormous win. Internationally, it just works, and there are no extra charges for text (unlimited) or data in other countries, just the same rates.

Diana rarely uses more than a half-gig per month, I tend to use only one, maybe two on a month when we're traveling. Our general use may average under $60 per month. We're coming from AT&T, where our monthly bill was around $140 for three lines and 15 gigs shared. That included a discount on the shared data pool as a former MSFT employee. My BFF was the third line, and as she just got married, she decided to be on a plan with her new husband (the nerve, right?), so our total was going to be around $110, reducing the line charges but no longer splitting the data pool cost three ways. That's insane for two people. I know a lot of people don't like pre-paid data, because they mentally can't not worry about the data usage, but if we're coming in $50 under what we paid before, I'm not going to spend time thinking about it.

The other plus is the wifi calling, which certain carriers and phones already have. We need it, because no carrier is strong inside the house. Here in Florida, we have concrete block first floors lined with foil, so it's practically like living in a Faraday cage. So, neat trick, you can go into airplane mode, turn on the wifi, and the phone works. Calls and texts come right in. It didn't work at first, because there's a barely documented issue that the wifi voice/text has a dependency on Google Hangouts. If you have more than one account on your phone, as we do (one Gmail and one using our popw.com accounts), you have to make sure Hangouts is logged in on the same account as your Fi account, which should be the Gmail account. This was quickly resolved in a chat session with a Fi rep, and the dude was funny. When I complained that Diana's SIM card was shipped by pony express (because it's taking 10 days), he said he would have a word with the ponies.

So far, I'm happy with the service though. Outside of the house, I get strong signal, and it's good downtown and in Delray Beach as well. Clarity of phone calls while at my desk is very good, and I couldn't do that before. 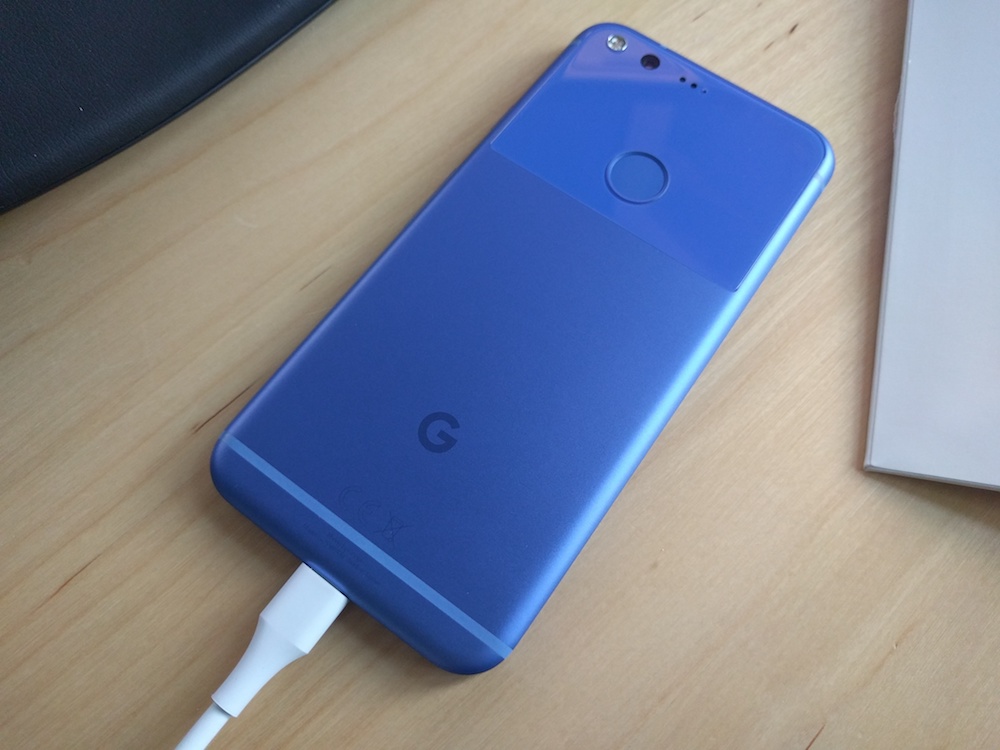 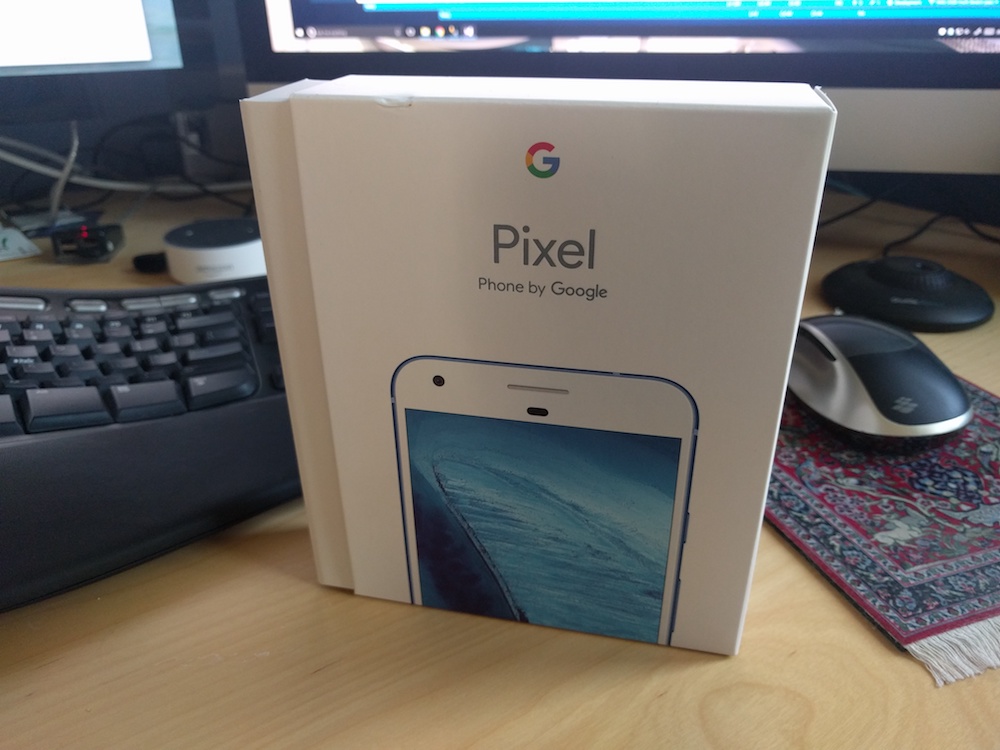 I recently made the switch to the same phone in black. Previously I used a Nexus 5, then a Samsung Edge and always regretted the Samsung. So far the Pixel is a great phone and I share your thoughts. Google Fi slipped my mind, I should look into if the Verizon sold Pixel in unlocked...