It was a tough decision to make, but after having the laptop exchanged once for an LCD image persistence problem, and having the same thing occur within a week on the second, I've decided to return the MacBook Pro with Retina display. It makes me a little sad.

Image retention is a phenomenon where something on screen still appears to be there, even though you've switched to something else. For example, this photo shows PointBuzz and the browser chrome after sitting there for ten minutes: 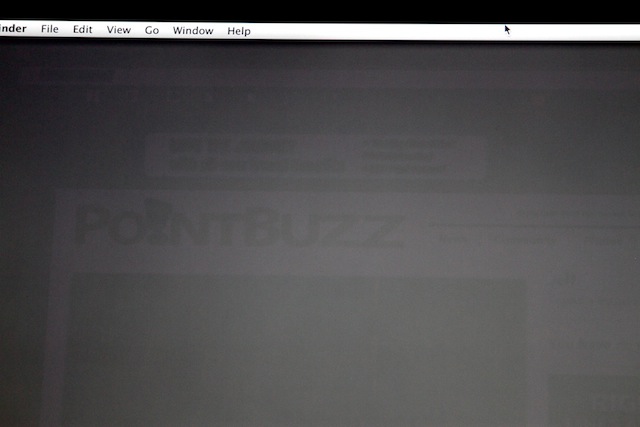 Now, in real life, no one sits on a Web page for ten minutes, but you probably do use a single application for perhaps hours at a time. In my case, that app is often Visual Studio. With its toolbars and many windows, much of the user interface is static, so when I'd switch to a browser window or some other app, it wasn't uncommon to still see Visual Studio. I just can't live with that, no matter how sharp the text is, especially if the problem only gets worse with time.

What made this a difficult decision was the fact that it's so awesome from a pure power standpoint. The computer is stupid fast. I'm replacing it with the top-end MacBook Air. What I lose is the "retina" screen, obviously, less memory, and a slightly slower CPU with two cores instead of four. On the other hand, the Air will still be much faster than my previous laptop, and I gain a more portable computer, weighing less, and about $600.

I'm incredibly disappointed, because that screen really is something to behold (until you're still beholding something you closed, at least). But given the savings, it makes it easier to buy the external monitor I've been thinking about. All things considered, the Air will still exceed my expectations in most ways.

To Apple's credit, they agreed to take back the thing without question, which surprised me since it's been about two and a half months since I got the first computer. I suppose when the replacement exhibits the same problem, it certainly qualifies under the warranty laws to get a refund. There's a thread on Apple's site with thousands of replies, and it sounds like the problem has to do with LG LCD panels, while Samsung panels don't seem to have the problem. I didn't want to do the "display lottery" a third time. I took a gamble on something new, and lost. It reminds me a little bit of the heat problems with the first MacBook Pro.

I'm sure Apple will get it right, but for now, I'll stick to the Air. I look forward to it.

You will need to share your experience with the Air as it compares to the Retina. I am looking to replace my 17" mbp and can't decide if I want to go retina or air and iMac combo.