I admit that I have a slight gadget problem. When I was researching tablet options, I did settle on the Surface 2 (which I love, by the way), but I was also intrigued by Dell's little 8" thing because it was Intel-based, ran full Windows, and it was (relatively) cheap at $299. I liked it a lot playing with it in the store, but went for the Surface because of the amazing screen, keyboard covers and the kickstand. It's my go-to lunch reading, VM-remoting, couch-surfing thing that Simon doesn't mistake for the iPad (which is kind of "his" for now).

Then Microsoft offered the Dell for the doorbuster price of $99, and $199 the rest of that day. Even now, Amazon is selling it for $250. I couldn't pass it up as a replacement to my Kindle Fire HD, which was great for reading, but browsing and app performance was pretty crappy. As I've said before, there's something to be said for having a smaller tablet for reading.

I probably wanna talk a little about the Windows software, but I'll get to that. In terms of hardware, this little thing runs on an Intel Atom CPU, with the 32-bit version of Windows 8.1. It is, in most senses of the word, a PC. You could use a Bluetooth mouse and keyboard and do stuff in Visual Studio if you wanted to (silly as that would be).

I was not a fan of the screen resolution, only because I kept comparing it to the iPad, Surface 2 and my phone (a Lumia 920). However, using it a bit, it's actually above average. Yes, it's not as sharp as those other devices given the lower pixel density, but it's still super readable. I had to turn off the auto brightness because it's too aggressively dimming. Once off, it's quite bright, and the color reproduction is pretty solid.

The body feels very solid. It doesn't flex or bend, and it's covered in some grippy plastic stuff. It feels more premium than it is, which is a good thing. The bezel around the screen is barely large enough to allow for the swipe-ins necessary for Windows. They didn't do a capacitive start button on the bezel, instead moving it to the top-left side in landscape mode. It's a little awkward in portrait mode or when headphones are in, but not as awful as some reviews make it out to be. It does have cameras, and I'm sure they suck. I did manage to scratch off a little of the rubbery stuff against something in my bag on one edge, but it's not a big deal.

Battery life is pretty amazing, though I haven't really measured it. All I can tell you is that I can get through an entire work day listening to tunes and doing a little reading at lunch, with power to spare.

Probably the coolest thing, and this is true for most of the Windows tablets, is that it has a slot for a micro-SD card. So you get the 32 gig mode, buy a $40 64 gig card, and you've got 96 gigs of storage. You'll still be under $300, which invites all kinds of comparisons to iPad in terms of value compared to storage.

I've never been a person who is apptastic, so the debate about whether or not there are enough apps or the right apps in the Windows app store isn't that interesting to me. Even with the iPad, I mostly used it for Web browsing (until the Facebook app was finally usable). I use the Surface the same way.

That said, being Intel-based and not ARM-based like the Surface 2, you can run Chrome on it, which is pretty fantastic. They have a "Windows 8 mode" now, and the only thing really missing is pinch zoom. It otherwise works pretty well.

I also copied all of my music to an SD card, and Xbox Music eventually indexed it all. To get my aging iTunes playlists, I had to do a little hacking of the iTunes XML file, install iTunes (then get rid of that vile thing), before Xbox Music would import the playlists. The music matching to work across devices kind of sucks... it only matched a third of my tunes. Not that it was a feature I was intent on using, but it was a good idea. Amazon has a desktop app that is so not touch friendly, but it's good enough to get new purchases on to the device quickly.

By the way, all of that hacking around with files is what makes the device kind of neat for a nerd like me. Unlike a traditional tablet, you can do whatever you want to it, like hack iTunes files and such. That's not something most people would ever care about, but not being in a locked down environment means you can control a lot more and do stuff that maybe the manufacturer hasn't thought of. It's really versatile like that. Of course, the negative is that you literally have to update drivers and firmware the way you would on a PC, which sucks. Not all of that stuff goes through Windows Update.

I happened to install RollerCoaster Tycoon 2 on it, just because I can, but certainly that's not a very easy thing to play without connecting a mouse. I'm actually intrigued by the stylus Dell offers, and maybe I could do it with that. There were huge complaints about it at first, but a firmware update seems to have quieted the critics. I'm just intrigued to use a pen to write and sketch.

The bottom line is that this is a really great device, which shocks me because it's from Dell. They mostly do commodity crap. Also consider the price. At $250, you don't quite get the high pixel density of an iPad Mini, but you're already $150 below that cost, with twice the storage. Add a cheap SD card, and the value gap goes into the hundreds of dollars. Again, it depends on what you do with it, and whether or not an app ecosystem is important to you. For me, the only things I would like are an Amazon Cloud Player app, and perhaps one for Amazon Instant Video (because I'm a prime subscriber), both as "metro" apps. The video I can do in browser, but audio cuts out as the screen goes off. 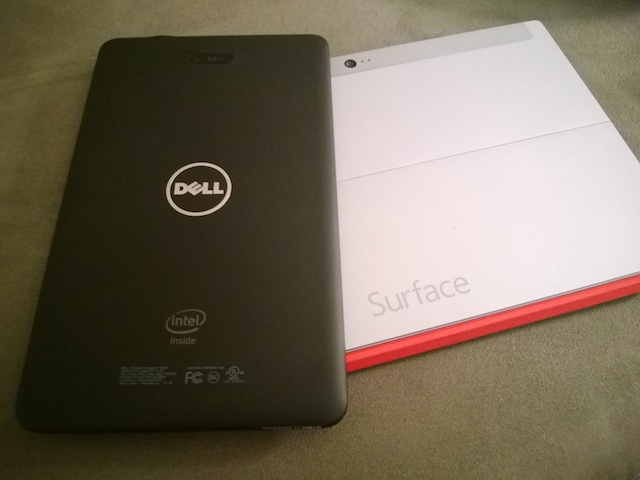