Back in early 2010, just before I became a dad, I treated myself to the Lego Carousel (video). After moving cross-country and being generally stressed out in a new job with a kid on the way, I needed something to kind of lose myself in. I remember going to the Lego Store in the Bellevue Square mall and being giddy about buying it. It brought back a lot of the joy I remembered as a kid, even if the price of such things were not for kids. I've bought a few of those big sets since then.

I was surprised this year when they released a new carousel, with about 600 fewer pieces, but since I have the ferris wheel and the scrambler, it only made sense to add to the collection! This one is a little smaller, but visually I think a little more interesting. The animals, none of them horses, are very cool, and I particularly like the frog, as its legs extend and retract as it moves. Because it's smaller, it's less repetitious to build.

The drive mechanism is also better, relying on a gear ring under the platform, instead of the friction tire around the outside, which is how the other one worked. Unfortunately, this one doesn't come with a motor, so if you want that, you'll have to shell out an extra $35 or so for the motor and battery pack. You can crank it by hand, but it moves too slow.

I am a little disappointed in the playability of the model. Simon is 7 now, but he still doesn't like motors on toys, as he's still sensitive to certain sounds. He prefers to manually move it around, and the platform isn't robust enough to handle that. To make it round, it uses a number of joints at the center, under the higher platform, and around the edge. Moving it from anywhere other than the internal gear pulls on the ring and causes it to come apart, and the only way to fix it is to take off the top and then attempt to get it back together by sticking your fingers under it. I'm actually surprised it's strong enough to pull the top around with it, because the only connection is the vertical poles on the perimeter. There is no shaft in the center.

It's a pretty easy build, and fun, but I do wish it wasn't so fragile. The best dynamic amusement ride is still the ferris wheel. It's mechanically elegant and robust enough for my kid to play with it. 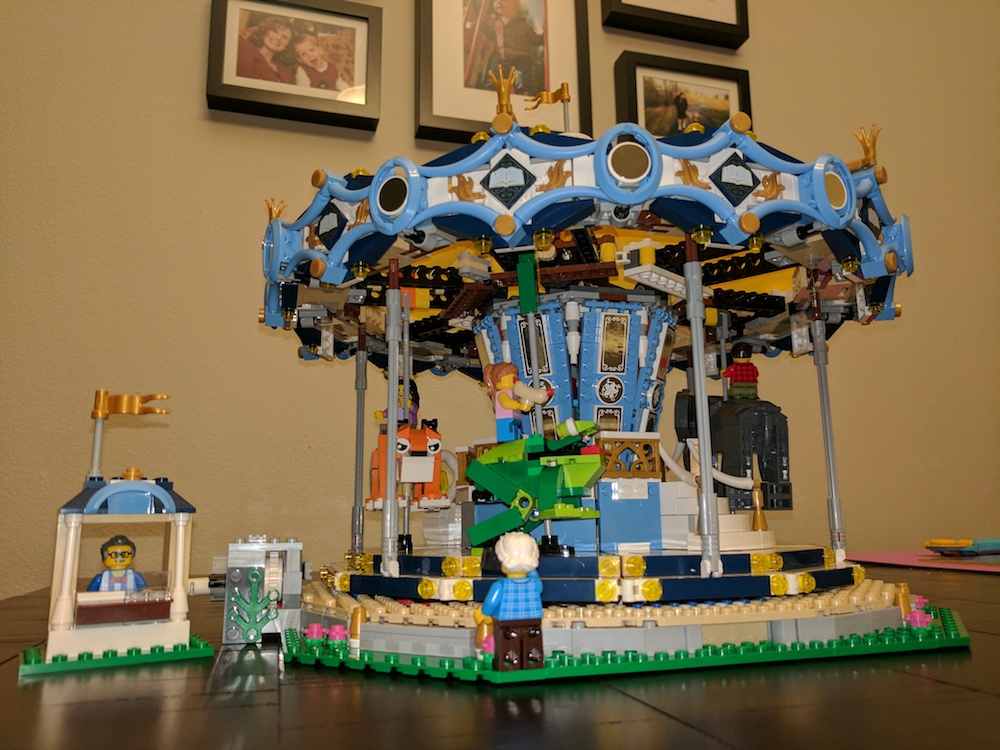