I figured it was only a matter of time, but Lego finally delivered a bona fide roller coaster model of its own last month, and it's very cool. After two carousels, a Scrambler and a Ferris wheel, this was an obvious choice.

The roller coaster is another huge set, weighing in over 4,000 pieces and retailing for $380. I think it was last year that they released a Joker/Batman themed set with track around it, so I wondered if they would go all out, and they did. There's also a smaller 3-in-1 pirate coaster they recently released, so they're going to get mileage out of these new track molds. This set does not include a motor, though I bought one for the carousel, so I had one handy. Simon prefers to use the manual crank anyway.

Mechanically, this is another interesting model without being super complex. A crank on the front of the station connects to a shaft that pulls the chain at the bottom of the lift, with an elegant tensioning mechanism. A gear at the top of the lift then drives a series of three kicker wheels that move the train around the first turn toward the drop. A proper storage track sits uptrack of the station, sliding back and forth (missed opportunity here for a maintenance shed!), and another crank is one-way geared to a kicker wheel to drive the train out of the station. The wheel slides out of the way, so you can let it keep cycling under power, otherwise it acts as a station brake.

There are a ton of minifigs in the set, including the ride operators wearing Lego logos and charging $100 for a ride, or an on-ride photo. Many of them have the two-faced heads, so they can be happy or scared. They can navigate a beautifully themed queue that twists under the structure. After passing by the ticket booth, there are garbage cans, a water feature and a juice bar before the stairs leading into the station. There you're greeting with a control panel and air gates for each of the three cars. There's a very extensive series of "no" signs in the station as well, which seems kind of negative. The ride itself has a nice sign, flags, an on-ride photo camera and landscaping around it. There's also a cotton candy cart with a creepy old man and his $100 bill next to it, where the one minifig that's too short to ride hangs out. Those are weird choices in the instructions.

The build took me close to 8 hours, I think, but I really took my time on this one. The column building can feel slightly repetitive, but it goes fast. There's a lot of variation in building the station, mechanical bits and scenery, so it doesn't get to be as tedious as, say, the decorations on the carousel. Again, the mechanics aren't super complicated, but it's really satisfying to see them come together. You will want to count out the chain links, which as a last step is agonizing, but it's important to get it right so the tension is correct

It's a great big set, and quite lovely. Honestly, I look forward to building it again, even though that means I'll have to tear it down. 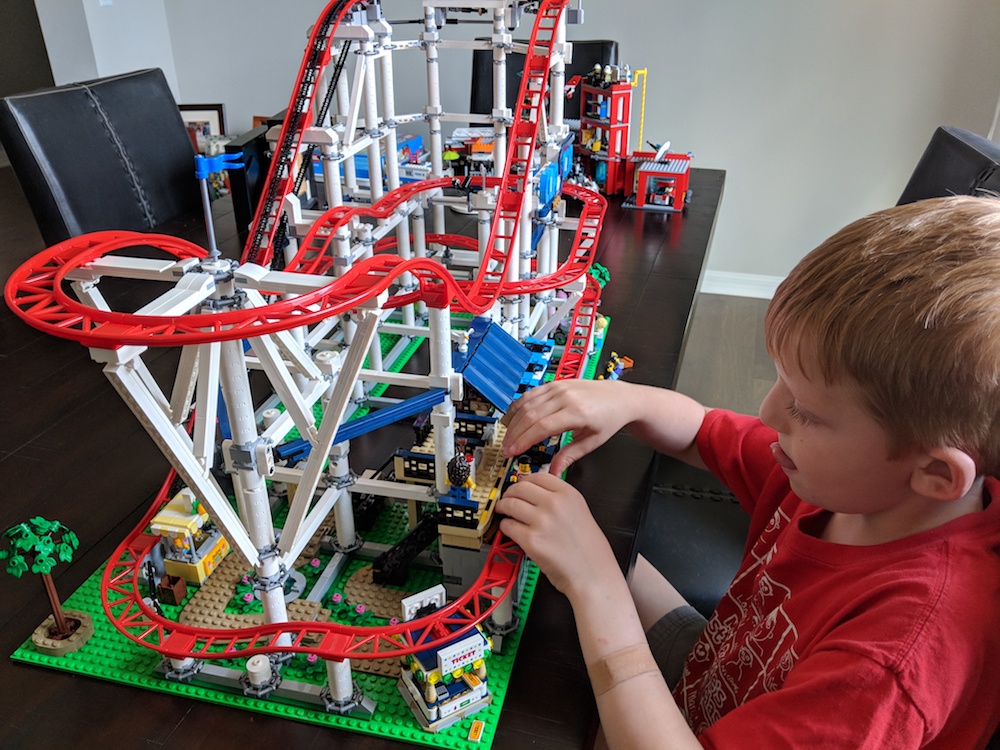