Review: Pandora, The World of Avatar at Disney's Animal Kingdom

Disney started doing passholder previews today, and we were able to secure a reasonably early time on a school night. A few things to keep in mind... This was a limited preview so the new area at Animal Kingdom was not busy. The line for the snack/beverage shack was the only significant line. The river ride was a walk-on, and the flight simulator ride was running in 15-minute blocks of passes handed out at the entrance to the land. It appeared that the new restaurant was fully operational, but we didn't go in. Also, this was before sunset, and we were out at 7:45 p.m., before it got dark. I suppose there are spoilers here, if you're worried about a ride being spoiled, so avert your eyes if you don't want to know what's in there.

I have never seen Avatar, the movie. I remember when it was released, people made a big deal about it, but between moving cross-country, starting a new job, looking after a pregnant wife and otherwise having a full plate, I didn't see it. When I finally bought a Blu-Ray player, it was offered as a free mail-in, but I forgot about it. So going into this new thing, my full understanding of Avatar is that people somehow projected themselves into blue cat people living on some amazing planet that was going to be strip-mined. Or something. Mostly, I heard the movie was really pretty.

Crossing the bridge to what used to be Camp Minnie-Mickey and the theater for Festival of The Lion King, a little bend and foliage hide the area for a big reveal. Or at least, it would be a big reveal if you couldn't see the back of it from the parking lot. The floating rocks are impressive, but not quite the gravity defying thing shown in the artist renderings. You definitely can trace the load-bearing elements, but it's still visually very cool. It's also very windy. I'm not sure if that's intentional, or just something that happens (it's like that walking under Spaceship Earth at Epcot most of the time).

From the central area under the rock island things, the Na'vi River Journey is off to the left, as well as a restroom, while Flight of Passage is to the right. They appear to be in the same building, which has an impressive series of queue paths that mix the alien plants with real plants and probably the most expensive rock work ever made. Even the hand rails have a custom finish and custom lights and such. Further to the right is the bigger counter service restaurant, a gift shop and a beverage stand.

You'll notice that cast members are happily shouting alien words at you, which is kind of weird, and maybe a little awkward. When someone at Epcot in the France pavilion says, "Bonjour!" to you, you get it, because it's a French person, and you have a frame of reference. The people in Pandora are just saying some made up stuff to you that isn't real anywhere else. It comes off as corny, and maybe it's worse because I didn't see the movie.

We started by boarding the Na'vi River Journey. Most of the queue is in the shade or under cover, but I imagine that even on a busy day it will move pretty quickly. The ride seems to have a lot of boats running very closely to each other, and it loads in pairs, four rows total at a time. Dwell time is very short. Drop in, sit down, and off you go.

If there's a story to this ride, I don't know what it is. The first turn has some small glowing things that look like... uh... let's say adult novelties hanging from the ceiling. Then you see a blue cat person that says something, and off you go into a jungle forest thing. Each scene uses some brilliant and convincing effects, and some of the 3D video projection is convincing enough that you have to look hard to even see that it's video. While there are some places here and there where you can see lights, they're probably the most hidden of any dark ride I've been on, so you need to look hard to be taken out of the moment.

I'm just not sure what the moment is. Every scene has some new bioluminescent plants or critters. I can tell that the "native" music gets louder and more layered as you go, and culminates in a blue cat person that is easily the most fluid animatronic character I've ever seen. I don't know what he's singing, or why, or where all of his buddies are, but he definitely seems to stare into your soul.

Then it's over. I mentioned that people described the movie as being "eye candy thin on plot." If that's what they were going for in the river ride, then mission accomplished. I did it twice, and while certainly magical and beautiful, I had no frame of reference and wasn't sure why I should be emotionally invested in it. This might be confirmation bias here: Since Pandora was announced, I wondered what the viability of this IP-made-themepark strategy was, because it's not like people have been talking about Avatar for the last seven years. It's not on T-shirts and lunch boxes or generally a part of the public consciousness.

Is this harsh? Maybe. Fortunately, it's not the only attraction in Pandora.

Flight of Passage is the simulator ride. More on that in a moment, but let's talk about the queue and pre-show. The stand-by queue is really long, and transitions from outdoors, to a cave with paintings, to an airlock sort of thing, to some interior bioluminescent environment, to a lab (which has a lot to look at), and finally the Avatar "interfacing facility" that let's you plug into a Smurf. This is explained in a poster in the Fastpass queue in three easy frames. It shows you sitting in the seat, "clearing your mind," then you psychically connect to your avatar (are these basically brainless blue-meat people for your use?), then you ride a Banshee. Got it, let's ride!

They were still feeling out loading and training, so with the scheduled times and no standby for the preview, it still took about a half-hour to get through the ride. I don't think they're running at full capacity, so I'm not passing judgment there. The first room piles in 16 people, though the first two seats were apparently broken. A screen on the wall blacked out the #1 and #2 positions. What follows is a far too lengthy explanation about matching your DNA to an avatar (again, are these soulless, brainless meat-people?), and they blow some parasites off of you and suck your DNA into the walls or something. In the next room, they explain the ride system to you, which has seats and restraints similar to a Zamperla Disk-O with the outward facing seats. There is also more story explanation about connecting to your meat-person, as told by Dr. So-and-so, which might be a woman posing as Sigourney Weaver. It probably doesn't matter.

Once we were seated, we ended up being there for awhile because of a disability load. I'm OK with that, but since my 7-year-old was a little anxious, I was worried he'd freak out. There's a little screen on the front of the seat to create some distractions. The 3D glasses are the best made of any ride, and are the best of any 3D movie or ride I've ever seen. The room goes dark, there are some flashes and the shield in front of you opens to reveal a gigantic screen. What follows is a flight simulation that moves you up and down, and each seat pitches and rolls individually. Along with wind and water effects, it's the most convincing flying sensation of any simulator I've ever seen. It raises the game. The world of the blue people is visually interesting, and has some "gee whiz" moments, even for someone who doesn't know the film. It's a bit more aggressive than, say, Soarin', or even Star Tours, but the movement is more precise because of the nimble, individual seat. It also has nice touches, like the ability to feel the Banshee "breathing" between your legs.

I'm torn. I was completely underwhelmed with the river ride, but really impressed with the flight ride. Again, the problem here is that I'm not in any way invested in the IP. There are other examples in town where this matters. For example, I don't care about The Mummy, but it's a damn fine roller coaster anyway. To me, that's why the thrilling flight simulator here works, but the boat ride is frankly not more interesting than Pirates of The Caribbean. At least I can relate to pirates.

We'll be back, but probably only to see it at night, which I imagine is spectacular. If Disney wanted people to have more to do, they've succeeded. I'm just not sure that the emotional connection that people have with it will be very strong. 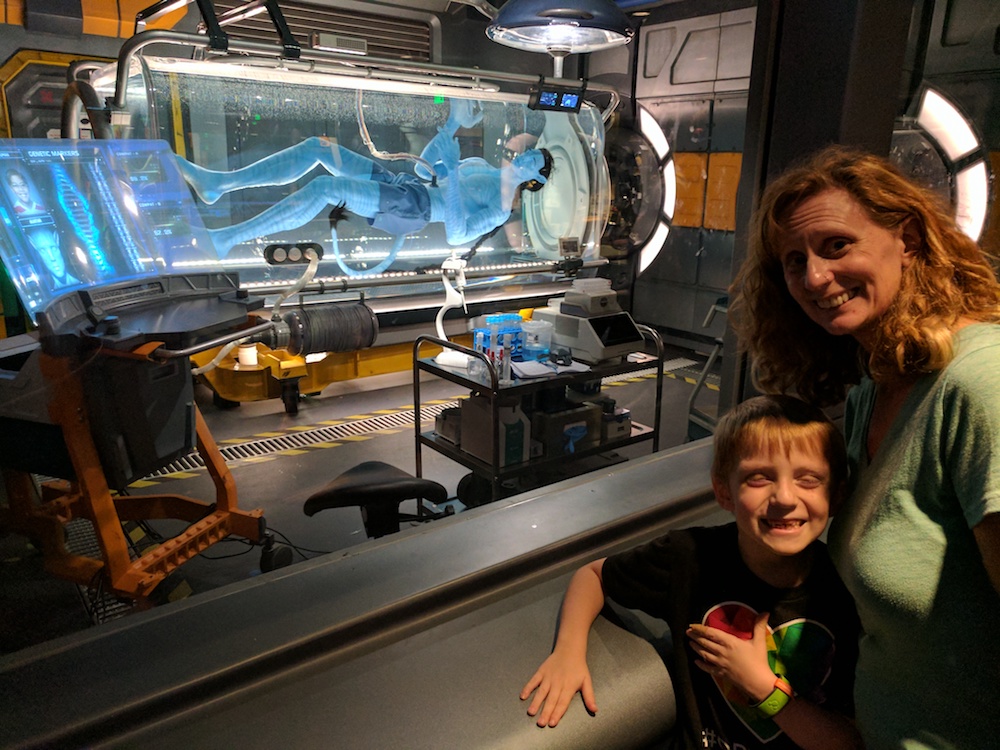 Hey! We found a Smurf Thundercat taking a bath!