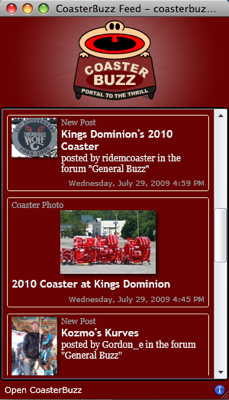 I started a little science project for CoasterBuzz about a week ago or so. I wanted to build a little Silverlight app that sucked down updates of all kinds, and make it live outside the browser. There are constantly new posts, topics, news items and photos hitting the site, and anything that encourages people to keep coming back is a good thing. It's not a giant community, but big enough that people like to be involved as much as possible, even if they're "readonly" types.

As it turns out, the back end of the project was more interesting to me, as I built a mini-framework that publishes events via any number of publishing services. In this case there's only one, a database writer, but I could just as easily pop in a Twitter publisher or Facebook publisher or what have you. Yay for extensibility and loose coupling!

As far as the Silverlight app itself goes, there are some things that bring me great joy:

I've got all kinds of frustrations too. Here are some of them:

All of that said, I do dig Silverlight. Most of my frustrations come from the somewhat uncoordinated release schedules. I love that they're iterating quickly, but the tooling has to catch up. I know we don't have much longer to wait. I'll post the general link to check out this app after I've done some refining. Right now it's available to paid subscribers to try out.