I was 7-years-old when the first Space Shuttle was launched into space. Even without the Internet and cable TV, the shuttle program was easily the biggest thing happening in the news at the time. Going to school in an inner-city Cleveland school, just after desegregation started (or "bussing," as we called it), a small number of kids were able to sit in a class room with a TV on a cart to watch the second launch. I don't know why this second grader got picked, but I felt like the king of Charles Dickens Elementary school.

I knew I was witnessing something that was historic, and possibly very dangerous. It was the most amazing thing human beings ever accomplished in my mind. For awhile, they seemed to show the first launch on the news every night earlier that year, and I could never see it enough. Someone in my family understood how fascinated I was by the shuttle, because in the next year or so I received the Space Shuttle Operator's Manual. This book was so cool because it had diagrams of all of the control panels, and a second-by-second procedure checklist of what to do leading up to, and after liftoff. So yeah, I was the kid who read through it and "switched" the switches as I went. (I still have the book somewhere.)

A few years later, shuttle launches seemed to almost be routine, and getting to watch them live was pretty rare in school. They didn't get much attention in the news, either. But one January in grade seven, waiting in my life science class, the bell rang, and we had no teacher. Ms. Smith was a notoriously evil kind of woman, and she was never late. The details of that classroom are vivid as ever. It had been renovated the summer before, which was good because Whitney M. Young Junior High was not a new building. It had the smell of new construction and the chemicals you associate with a biology class. The table tops were the kind of material you'd find in any new science classroom, but having gone only to old schools, it was new, and cold.

Ms. Smith came in without saying anything, despite the slightly rowdy honors class. I think that's why the class instantly quieted down, because it was weird. Somber in a way you would not have expected from this unpleasant woman, she just got to the point.

Instantly I assumed she was wrong. There was just no way, and I thought she was oversimplifying things. The rest of the afternoon, it was all I could think of, and I raced home to watch TV. Of course the networks were only covering this at the time. Within hours they were already looking at video of a flame spurting out of one of the SRB's, and my book showed that's where the joints were between sections. It must have leaked. That's the only thing that made sense. Of course, that's exactly what happened, and we now know it caused the booster to separate and penetrate the external tank, causing exactly the kind of ultimate structural failure that you would expect.

It would be more than two years before the next shuttle mission, and by then I was in high school. While my interests had shifted a bit to things like girls and computers, I was still a massive fan of the space shuttles. It still seemed like the most remarkable feat of humanity to repeatedly launch people into space. That's why it stung just as much when we lost the Columbia crew years later. I remember that day first because the SQL Slammer worm was infecting my server (hosted at home) because I didn't have SQL patched and had the port open, and one of Stephanie's Canadian friends brought us out to a hockey game in downtown Cleveland. I remember sitting in a cafe still trying to wrap my head around what happened.

In the years after that time, I saw the Space Shuttle three times, from far away, and not by design. On three different trips to Walt Disney World, I happened to see the launch from Orlando. Totally random coincidences. I would have liked to have seen the final launch, but couldn't make it happen. When they announced the various places they would park the decommissioned orbiters (Seattle was robbed, by the way, and LA getting one is a joke), I was excited to finally be able to see one up close.

Atlantis was brought home to the Kennedy Space Center, and early on it was clear that they were going to build a fantastic home for it. They did not disappoint. They have a short film in two parts in two different rooms that you watch, leading to a see-through-the-screen reveal that is pretty dramatic, with the inverted Earth on a screen in the background. I'm not gonna lie... I got a little misty.

Being able to stand there, a few feet away, was pretty special. Knowing what that machine did, the number of laps it did around the planet, the speeds and distance it went... it's hard for me to put it into words because I didn't have any words to offer.

I hate that space travel and the science that goes with it is no longer a priority. That people no longer see the value in it is mind boggling. Just the intangible value of people having pride in what is accomplished, as the human race instead of as a nation, was huge. In a lot of ways, the space program was Kennedy's great legacy, and it's unfortunate that we no longer have, or seek, that kind of transformational leadership.

It was a good day, seeing Atlantis. I look forward to doing so again. 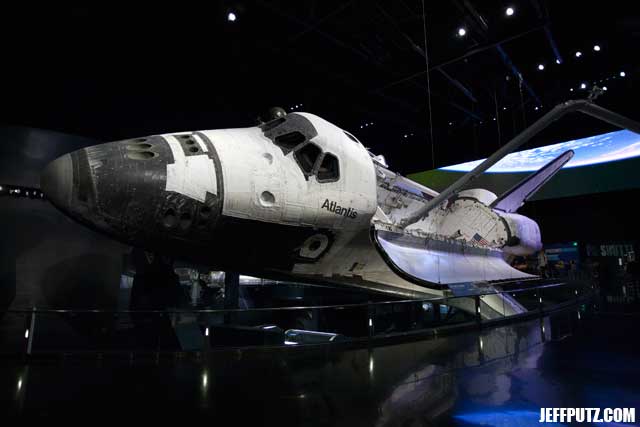