I'm not sure if I've written about it, but Planet Coaster came out recently, and I think it's a solid game. Like RollerCoaster Tycoon 1 and 2 from way back, I've played through the bulk of the scenarios, and now I kind of hang out in the sandbox to build stuff. It's pretty cool.

Simon, not surprisingly, also thinks it's cool. His playroom is currently occupied by an aging K'nex Serpent roller coaster, and a bunch of wood tracks, a Hot Wheels garage and countless cars of various sizes and shapes. Oh, and a bunch of Duplo blocks. Collectively, this is a "ride" that he likes building, and as is the case with actual amusement rides, he's mostly interested in the mechanics and procedure of the rides and not really the ride experience itself.

For some time, he was all about watching me build stuff in PC, but he wanted to try and do stuff himself. I'm not sure if he's ready for physics and how coasters work (my gut says challenge him and see what his almost-7-year-old brain can absorb), but he gets that he can drop a pre-built ride on the ground and build some paths to the entrance and exit. He also gets that he can do what the game calls track rides, which are things like cars, log flumes and the like. So I let him go nuts.

He dropped in some pre-built coasters that came with the game, or those that I saved, but otherwise, he managed to do some serious work as he sat there, going at it for six hours. He built a custom monorail, some car rides and a log flume, and a ton of flat rides and food stands. I wasn't sure how he would do, because navigating in 3D space with some weird mouse and button movements isn't very natural, but he did it.

In fact, he overdid it. When it came time for dinner, he was complaining about a headache, which isn't entirely surprising because I'm not sure he actually blinked during that time. I should probably have enforced a break. Still, I'm careful about how I limit his time, because I think that there is some developmental benefit there in terms of fine motor skills, problem solving, patience and focus. I also remember how adults were constantly treating me like an inconvenience or burden because I wanted to mess with their computers. I might be a little bitter about that.

We'll try to do the roller coaster physics, and see how that goes. 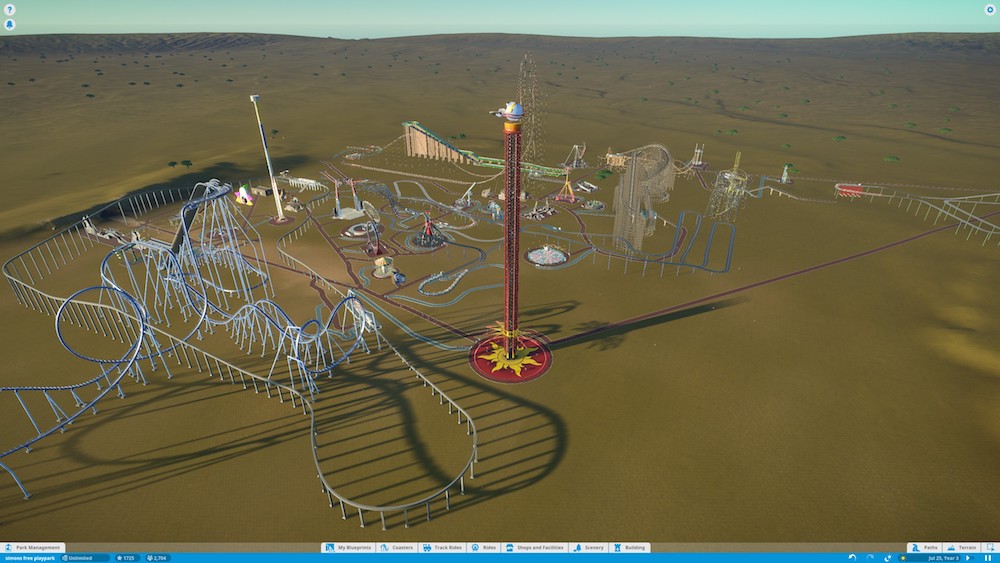