The passage of time is always an interesting thing to observe as you're growing up, with the years seeming to pass by faster when you're older. But remember when you were a child, how a year seemed much longer? Having a child seems to bring back that sense, at least, in the context of the baby. For me, the last year simultaneously went slowly (with Simon) and quickly (with work).

Our little guy is now a year old. The memories of his delivery are still so vivid (as many terrifying memories are). That first month was hard, and the first three or four were hard for Diana after I went back to work. Everything is new, and advice is only valuable to the extent that your kid is like other kids. But we've been fortunate that he has generally been healthy, if a little on the huge side, and his development has been a lot of fun to watch.

The physical development is particularly interesting. As a volleyball coach, I've spent a lot of time breaking down fundamental skills as a series of actions, and now I see myself doing it for the most basic actions that Simon tries to perform. He's teaching me how to pull yourself up to a standing position. It's fascinating to see the trial and error that goes into doing the most basic things. He isn't walking just yet, or even crawling, but it seems like the walking could begin at any moment.

Simon's personality development has been a joy to watch as well. He seemed to start that very early, with this hilarious double fist shake with scrunched up shoulders when he was excited. It only lasted the first month, and I hate that we never got it on video. But since then, he's had his "talking" routines, his "reading," tickle fights, and what not. His laugh is completely amazing. He's generally a happy kid.

It hasn't all beeng giggles, of course. Because his teething was so intense, I don't think he ever had just one tooth in progress, he spent a lot of time being unhappy. When the pain would subside, or he was medicated, he was like a different kid, the happy one we know now. Fortunately, he finished up with that around ten months or so, and he's been significantly happier ever since. And he doesn't need a drool bib all of the time!

The current challenge is sleep, which he isn't doing as consistently as we'd like during the day. His overnight has been kind of hit or miss too, sometimes waking up in the late evening, or early morning for a brief amount of time, until he gets a snack. We're hoping that the forthcoming time change in particular shifts him to more of an 8 to 7 schedule. We have to remind ourselves that we've come a long way since the three hour sleep sprints of a newborn!

Having a baby really changes your perspective on the world, that's for sure. For me, I have greater awareness of the way I interact with all people, and my priorities are carefully considered. I think I'm more financially responsible than I've ever been, thinking of my family.

The thing I like most about having Simon is coming home to him and Diana. It's really the best part of the day. Monday mornings are hard because I hate to leave after spending the weekend with my little family. When we took our first "real" vacation to Orlando in January, it was perfect. Being on the plane with him wasn't exactly fun, but we had such a good time with him in the theme parks and at the hotel (in part because of Diana's excellent planning).

Simon's second year will be interesting I'm sure, as he learns to walk, and starts to talk. I love my little guy! 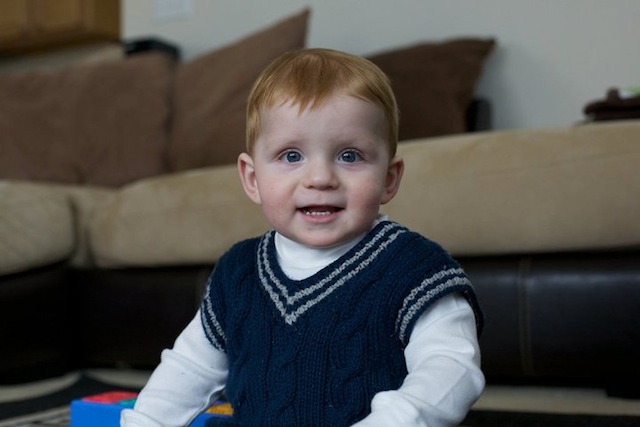