This is the third Halloween for which Simon has graced this planet, and it's his first for the actual trick-or-treat process. The first year, sure, he wore a tigger costume for a few photos. Last year, a few photos for an otter costume. This year, Diana went all out and made a sheep costume that was awesome. He was obligated to hit the streets. Although, it's worth mentioning that he has already been out a few times, including Boo at The Zoo.

One of our friends in the neighboring town, from Diana's former work circle of friends, invited us over to do trick-or-treating with Simon's friends. With the three of them going out, the theory went, Simon would be more likely to go along with them and see what the process is all about. Sure enough, it worked, and it was particularly funny how I he shadowed his friend Lucas, a few months older, going from house to house.

Granted, Simon doesn't really even like sweet stuff, though he's become fond of the occasional dark chocolate M&M. But it's nice to see him do something socially with the other kids.

The neighborhood we were in was a total zoo. It's one of those rural farm areas where some big plot of land was converted to a subdivision (10 to 15 years, I would guess), but it was mobbed with kids. Most houses had folks out sitting in their driveways, temperature in the low 40's, with a couple of beverages at their disposal, buckets of candy, and a big fire thing set up. All I can say is that it's very Ohio.

I know I mentioned this before, but Diana's sheep costume was awesome. She did such a good job on it, with little to go on other than an idea and some wooly looking fabric pieces. The tail really tied it together. Thankfully, Simon also tolerated wearing it, and he was super cute. 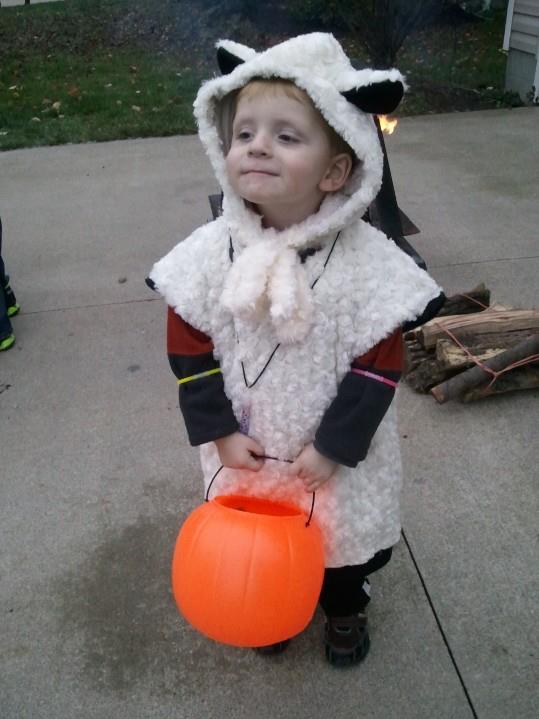