Simon had a really rough day today, and I'm not sure why. And because he had a tough day, that means Diana did too. I hate not being there to be backup in those situations.

I theorize that there are times where he just doesn't want to be alone or put down, because when you do, he totally freaks out. Screaming at the top of his lungs, in a way that distinctly says, "I'm not happy," instead of, "I'm hurt/hungry/uncomfortable." When I got home, he had been screaming for about 90 minutes, and all Diana could do was leave him in the crib. He wouldn't eat, wouldn't sleep... he was just miserable.

It's really hard to be rational in those cases, but since I didn't have to listen to him do it for much of that afternoon, I tried my best to stay cool and read his signs. I first gave him a stern talking to about being dramatic, which he probably heard as "blah blah blah." Then I picked him up and tried to get him to calm down. He was eye rubbing and yawning, so he was tired out of his mind. I put him down, it started again. I got him to chill out a little, turned off the lights, and sat next to the crib with a hand in touching him. He literally held my hand until he fell asleep. It took three tries to leave before I could do so with him sleeping. He stayed there for two hours until we got him up.

These kinds of situations are difficult, because they fall outside of the typical hungry, tired and poopy categories. He can't come out and tell you what he needs or wants. I felt like I could distinguish this as a "want," but I wasn't sure what it meant since it was so out of character for him.

We did have a good day earlier though. Simon and Diana came to work, picked me up, and we went over to the Commons for some lunch. We went to a quiet area outside the main food areas and the three of us had some lunch, where he charmed everyone who walked by. After lunch, we headed over to the company store to buy him a Microsoft hat and get a free "future employee" badge, which looks pretty much like the real ones. Yeah, I'm into these Kool-Aid company moments.

He was in much better spirits when we got him up at 7:30, but after eating and a bath, it was pretty clear that he was ready to go back to bed, and he did so without protest. The Puzzoni house is once again a calm and peaceful place. 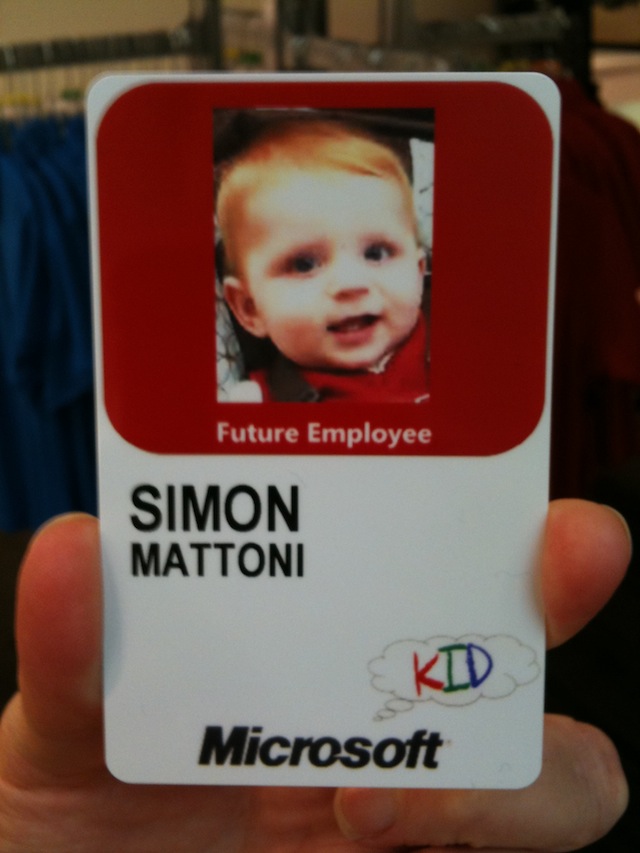