Wow, I can't believe how sad selling the JP pinball makes me. I think I've had it for about nine years now. I haven't played it as much in recent years, but it literally is like a piece of furniture, and it was the focus of countless parties, sleep-overs, volleyball gatherings and wrist cramping nights.

When Stephanie and I started dating early in my senior year (fall, '94), we encountered one of these for sale at the mall in Mansfield. I flirted with the completely irresponsible idea of buying it on credit, for I think $1,800 at the time. I think my entire credit limit was only $2k to begin with. Banks didn't give a lot of credit to college students in those days. Fortunately, I talked myself out of it, but I always said that if we grew up and lived together, we'd get one.

So 2000 rolls around, I make a cool $100k selling popworld.com to the Brits, and I have the cash to buy it outright. So I did, much to the dismay of others in my apartment building. Also to the dismay of the people who helped me move into this house in 2001. In the house, we also got the three movie posters framed and mounted to theme the room with the red furniture we had at the time. It just didn't match my newer brown couch nearly as well.

What made it such a great machine was the simplicity of the mini-goals and the attainability of the bigger goals. It was easy to learn how to get all six balls going, even if you were drunk (as evidenced by various attendees to various parties). To this day, I think it's one of the most fun machines I've ever played. And of course, people loved to see the T-rex eat the ball.

In the bigger sense, I'm amazed at just what a focal point a pinball machine is in social situations. I noticed in particular that since moving my office downstairs and shoving it behind my desk, where people can't stand on the sides, it got less use. At parties, even small gatherings of a half-dozen people, it would be played almost continuously. Come to think of it, the machine may have even had more exotic use I probably don't want to know about.

Giving it up makes me sad, not so much for the play value, but for all the memories it's associated with. When we get to a point where we're living in a house again, I definitely would like to get another, preferably virgin, out of the box. I love the new Indiana Jones machine, but unfortunately, Stern only makes their machines for about a year before going on to the next one. 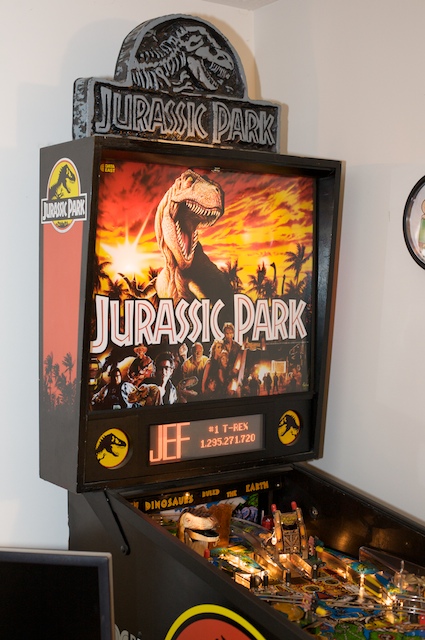 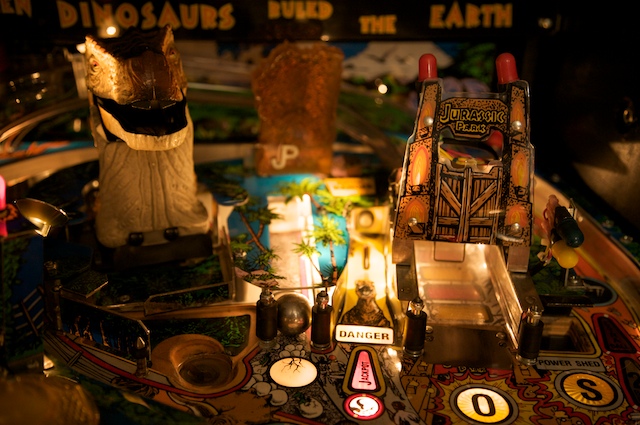