Sometimes adversity forces you to get creative

Imagine it's 2001. In April of that year, I bought a house, using some of the money I had from the sale of popworld.com (for a cool sum of $100,000) as a down payment. Worried about the deterioration of Penton Media, seeing all of my friends get canned, I secured a new job at a start-up media company in July. In August, CoasterBuzz started to get way too popular to host it on someone else's dedicated server, and the cheapest option at the time became a T-1 to my house, at a cost of about a grand a month. Advertising would cover the cost.

Then 9/11 happened. The company I worked for had to cancel a trade show, and its financial situation got dire very quickly. Despite the assurance from the CEO about the stability of the company, they had to let me go. In October, I got this letter from DoubleClick, the ad company that wrote the big checks allowing for a T-1, and giving continued life to CoasterBuzz: 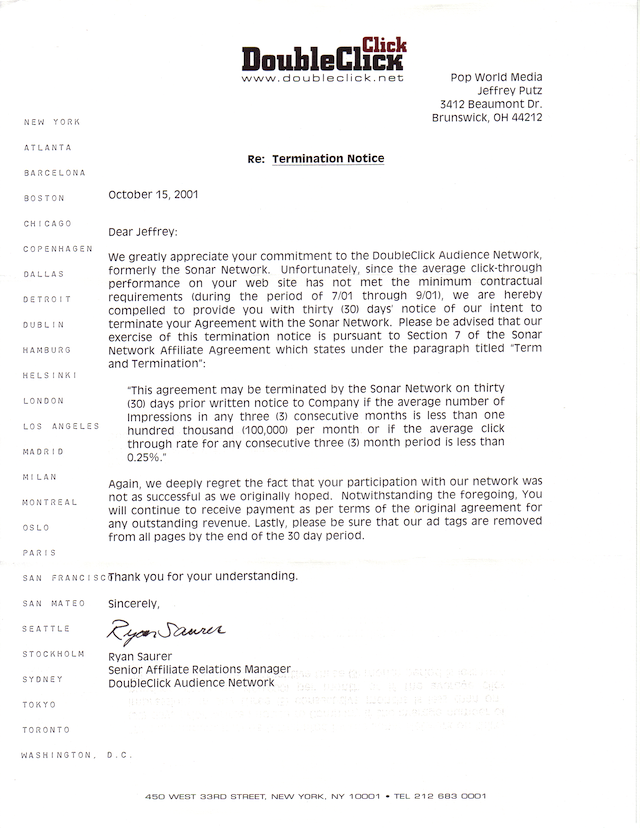 Getting 100k ad impressions was a piece of cake, but the click-through ratio sucked. The ads were totally irrelevant to my audience, and there was no significant tuning the way there is today. (Ironically, it was Google that eventually bought DoubleClick.) But none of that really mattered. What was important is that I just got a mortgage a few months before that, and a T-1 that I had to continue to buy from Sprint for one year. Basically, it was the scariest possible situation for someone at the ripe dumb age of 28 with no job.

The unemployment was psychologically taxing enough, but this other thing that I had started, that had become such a big deal in less than two years, couldn't sustain the expense. I could lose my shirt and the site.

It was at that point that I wondered if anyone would pay for the site. I also wondered if they would do so and not really get much in return, or something different than people who visited the site for free. All I could think of is that they'd get a membership card, no ads, and access to some events. As it turned out, all I had to do was ask.

I ended up going back to work after six months or so, and I kept the T-1 for two years total. After that, hosting became more of a commodity, and I was able to get away with "only" $350 for my own box. Memberships covered nearly half of my expenses, and I was able to carry on. CoasterBuzz is closing in on its 12th anniversary.

Things got so shitty in a very short amount of time. In some ways, I'm almost surprised that I didn't just curl up in the fetal position and cry. Actually, I did cry a few times that year, but I managed to pick myself up and get creative. I solved problems.

It has been my experience that when things are difficult, you have no choice but to innovate your way out of the difficulty. Professionally, it wouldn't be the last time I had to overcome an ugly situation, and it won't be the last. Ditto for my personal life. In fact, adverse situations tend to shake you free of complacency. You might fail some more, you might succeed, but I honestly believe that the potential for just being better is high.